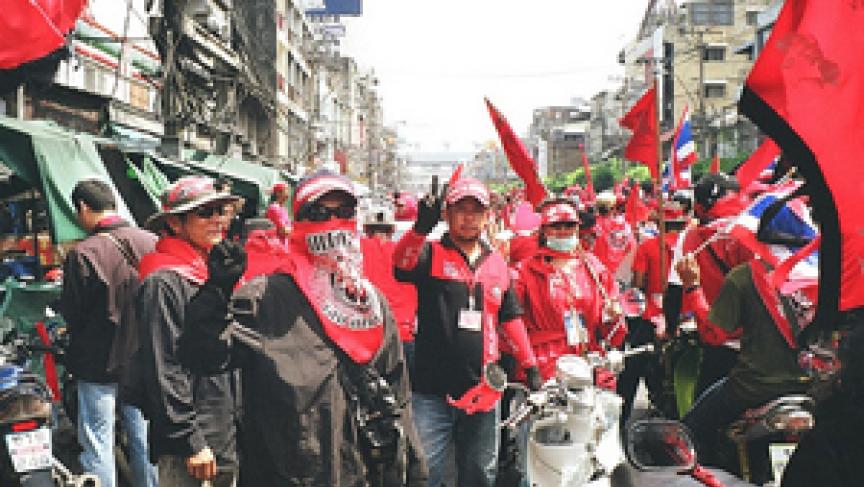 Red shirt protestors in Bangkok on April 9, before the clashes on April 10 that killed 21 (Image by Flickr user Nate Robert (cc: by-nc-sa))

Foreign tourists ran for cover in Bangkok this weekend as bullets flew in the Thai capital’s old quarter. The violence in the streets was the worst in Bangkok in nearly 20 years, as anti-government protestors demanded the resignation of Thailand's Prime Minister. They won a political victory on Monday, when Thailand’s election commission recommended that charges of financial irregularities be brought against the Prime Minister’s party, which could lead to the party's dissolution. Still, the streets of Bangkok remain turbulent.

Opposition supporters known as "red shirts" shouted slogans and waived red banners. Some carried empty coffins with framed pictures of their slain colleagues. Bangkok is under a state of emergency, so this parade and other demonstrations by the red shirts are illegal, but that did little to deter the protesters. On Saturday, their anger met with deadly retaliation when a street battle raged between thousands of red shirts and security forces. Twenty-one people were killed.

But red shirt supporter and university professor Toom says the Thai leader isn’t fooling anyone. "I think more people will come and join the red shirts because they can see what’s going on. They want Abhisit to dissolve the Parliament. That’s all they want. They want a new election. They want true democracy."

The red shirts claim Abhisit came to power illegally with the help of the military, and doesn’t speak for Thailand’s poor. Red shirts have camped out in the capital for weeks, sleeping in the shadows of luxury malls and hotels.

Abhisit met with red shirt leaders last month to hear their political demands, but no deal was reached on when to hold elections. The red shirts then began to crank up their campaign of civil disobedience until Abhisit declared an emergency and sent in soldiers.

Abhisit spokesman, Panitan Wattanyagom, says the soldiers fought back only after they came under fire, though it’s not clear who shot first. Nor is it clear when there might be talks to resolve the crisis.

"The Prime Minister is open for negotiation," Panitan said. "The situation should return back to the beginning, where there is no law breaking, there is not attempt to block certain intersections. If they’re still breaking laws on the streets then it’s difficult for him to sit down and talk."

Abhisit is currently popular with Bangkok professionals and has the backing of Thailand’s military. Abhisit insists his government will continue in office, but some red shirts want to see the return of the former Prime Minister, Thaksin Shinawatra.

Thaksin, who sold himself as a man of the people, lost power four years ago in a military coup. He now lives in Dubai and is wanted at home for corruption. In February, a Thai court seized nearly two billion dollars of his assets.

But activist Toom says the red shirts are not fighting for Thaksin. "The government tried to make everyone believe that everything we do is for Thaksin, but it’s not. It’s for true democracy."

Thailand’s democracy is still a work in progress, where rural votes are bought and sold, and the rich and powerful are usually above the law. But according to former cabinet minister and red shirt supporter Chaturon Chaisaeng, there's a mood of change in the air.

"It is a ideological fight and it’s about power," said Chaturon. "It’s about power of people, which was deprived by the military and by the system; by the elite of this country. People want to fight for their power back."

The Army has been called back for now, but the fight to decide Thailand’s future continues and Saturday’s bloodletting may not be the last.