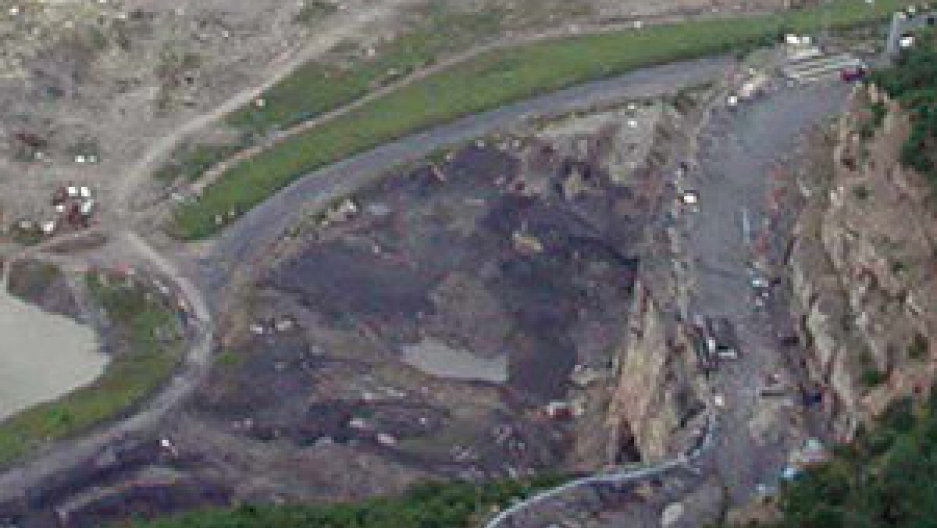 It's the worst mining disaster in the US in decades. Twenty-nine miners are dead, killed in a massive explosion in the heart of West Virginia's coal country. Officials and families are left with questions and grief.

Miner Tommy Davis lost his son, Cory, and his brother and nephew in the explosion.

West Virginia Governor Joe Manchin, on viewing the destruction at the explosion site, called it "horrific." "That's an explosion that [is] just beyond proportion."

Mine safety investigators are still searching for an exact cause. They're also reviewing the safety record at the Upper Big Branch mine, which amassed more than 1,100 violations in the past three years, many of them serious. Federal regulators even ordered parts of the mine closed 60 times over the past year.

The mine is just south of Charleston, the state capital, in the Coal River Valley. And all along the Valley are the scars coal mining has left on lives and the landscape.

A few miles south from the disaster scene is Marsh Fork Elementary. The school has been the staging center for media briefings since the explosion. Just up hill, another coal mine looms over the school. This one a massive mountaintop removal operation.

Residents like Ed Wiley fear that mine and its lake of semi-liquid coal waste endangers school kids. "And when you've got two point eight billion gallons of toxic sludge sitting over an elementary school, it's not good."

Just over the mountain to the west, Lora Webb watches the tiny community of Twilight disappear, as a coal company buys up houses and blasts away the mountains.

"I think if king coal has his way about it ... it'll be gone, it won't exist anymore," Webb says. "What kind of treatment is that to the citizens of a community that's supplying the rest of America with power?"

In neighboring Logan County, family members still grieve the deaths of two men lost in a mine fire in 2006. And just across the state line in eastern Kentucky, residents remember the massive spill of coal slurry ten years ago that destroyed streams nearly ten years ago.

All these incidents have one thing in common: Massey Energy. Massey is the country's fourth largest coal producer, and has racked up record fines for safety and environmental violations.
Writer and journalist Michael Shnayerson spent nearly three years investigating Massey for his book, "Coal River."

"The story of Upper Big Branch is in a sense a story of Massey in microcosm," says Shnayerson. "It was a union operation, as really all the mines were in the coal fields at one time, but soon after Massey got a hold of it in the early '90s, Don Blankenship -- the Chairman and CEO of Massey -- made it his personal campaign to break the union at the mine."

According to Shnayerson, Blankenship broke the union and after that, mine workers found themselves working longer shifts. "Now they work 12-hour shifts because that way the mine, which operated 24 hours a day, only had two shifts -- so only two shifts' worth of health insurance, and fatalities occurred."

In 2006 there was a fire at another Massey subsidiary mine called Aracoma, nearby in Logan county. Two men were killed. In the criminal investigation that followed, a memo by Blankenship was released that read:

"If any of you have been asked by your group president, supervisors, engineers, or anyone else to do anything other than run coal, you need to ignore them and run coal."

Blankenship later disavowed the memo. "But, you know, in the end the events and the facts speak for themselves," said Shnayerson. "That particular disaster at Aracoma came after some 90 safety violations mostly for the problems that went on to cause the fire."

Shnayerson says the recent explosion was a result of a reckless disregard for safety measures.

"All you can do to try to avoid the danger of a static explosion of methane is to ventilate the underground mine extremely well with huge fans and other things. It's not hard to do."

Last year, Blankenship and his company sponsored a big Labor Day picnic featuring stars of country and rock music, which drew tens of thousands of people. He gave a speech at the event railing against Washington regulation and climate change legislation.

"As someone who has overseen the mining of more coal than anyone else in the history of central Appalachia," he said, "I know that the safety and health of coal miners is my most important job. I don't need Washington politicians to tell me that, and neither do you.

"But, I also know that Washington and state politicians have no idea how to improve miner safety. The very idea that they care more about coal miner safety than we do is as silly as global warming."

"He is an avowed sort of Darwinian capitalist, and he feels that he needs to do as the head of Massey whatever is necessary to produce profits. And if safety measures get in the way, he's going to tell his managers to, if not ignore them, to make them a second priority. And he's taken a certain ... glee in basking in his notoriety as the most aggressive coal baron and, in particular, the most aggressive mountaintop removal operator."

Shnayerson says it's an ever-expanding lake of sludge. "And if that lake happens to bust through its earthen barrier, it can just roll down a hillside and there's a distinct danger that the 240 children of the Marsh Fork Elementary school could be drowned."

A similar Massey impoundment in eastern Kentucky did fail in October of 2000, releasing a 300-million gallon spill of toxic sludge.

"A little known fact is that the slurry spill in Martin County was actually the worst environmental disaster in the United States east of the Mississippi," said Shnayerson.

Shnayerson doesn't think the Upper Big Branch Mine explosion will change the way mining is practiced, but is that public opinion will spur legislation around safety.

Carol Raulston, a spokesperson for the National Mining Association, an industry group that represents Massey and other coal companies, claims that Massey has improved its safety record in the last few years.

"In fact, last year they had three of the safest operations in all of American mining. So, they certainly have done an exemplary job in some operations. This operation may not meet those standards that they'd even set for themselves."

Raulston adds that the safety performance of operators in a top priority at NMA.