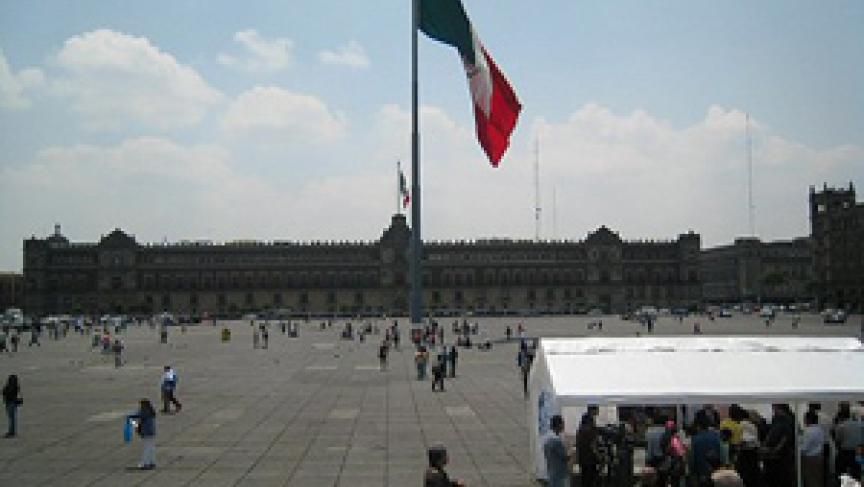 David Lida, who lives in Mexico City and wrote a book about what he calls the capital of the 21st century, compares the social life of the city to that of other, more progressive cities in the world.

"When the sun goes down, sort of anything goes. It culturally is, I believe, more along the lines of a city like London or Paris than any other Latin American capital that I’ve been to."

Maybe that’s why Mexico City was the first in Latin America to legalize gay marriage and also the adoption of children by gay couples. Three years ago, Mexico City made abortion legal in the first 12 weeks of pregnancy.  Mexico is more than 90 percent Catholic, but it’s also a country with a historically strong separation of Church and State.

"The fact that the President of the United States or the governors need to swear on the Bible would be something totally unheard of in a Mexican perspective," said John Ackerman, a constitutional scholar and professor at the National Autonomous University of Mexico. "It wasn’t until the early 1990s that priests could actually vote. But still, they cannot run for office and they cannot, in their sermons, directly support X or Y candidate."

But that strict separation of Church and State is changing as Mexican politicians venture into policy areas that were previously taboo. It began with a law legalizing abortion in the capital.

Mexico City is firmly in control of the leftist party, the PRD and Mayor Marcelo Ebrard, who David Lida says has a knack for publicity. "Certainly passing these laws gets him on the front pages of newspapers all over the world. And he is widely believed to have presidential aspirations for 2012, which is when the next elections are."

But nationally, the PRD is not in control. The conservative PAN party of current President Felipe Calderon opposes abortion and gay rights. And then there’s the party that ruled Mexico for 70 years, the PRI. On paper, it’s a leftist party, but its leaders have been moving to the political center in their search for votes. Now, for the first time, the PRI is campaigning to defend so-called family values and the right to life. Seventeen, mostly PRI-led, State governments have criminalized abortion. And late last year the Mexican coastal state of Veracruz asked the Congress to ban abortion nationwide.

"The debate is going to be more intense over the next few years," says Ackerman. "I think 2012 these topics are going to be used in a political debate to vote for one or another politician, but I don’t think there is a mandate from Mexican people to transform the constitution."

In fact, compared to other countries, Mexico has a relatively high rate of abortion. This is a fact that  Lucia Lagunes is the director of CIMAC, a network of Mexican journalists who cover women’s issues, says is shocking to many in Mexico.

"Yes, all of us are having abortions, and a lot of the research done by feminists in Mexico has tried to find out why women choose to have abortions. But many Mexicans remain horrified that this is happening."

Still, in national polls, a majority of Mexican oppose both legal abortion and same sex marriage. Mexican political analyst and radio talk show host Ana Maria Salazar says it is yet to be seen how much voters will be influenced by social issues such as abortion.

But some Mexicans, like Cuernavaca businessman Luis Alfonso Alvarez Camarena, say these aren’t the most important issues in a country where more than 6,000 people died in drug violence last year.

"Okay personally, I am not in favor, neither abortion, neither gay matrimonies or even worse, I think, adoption from gay matrimonies. But that’s not the biggest issue that should be in the mind of the Mexicans because there are more important issues to discuss. The first, I think, is security."

But solving the country’s security problems won’t be quick or easy, and Mexican politicians may decide it’s more expedient to campaign on social issues like abortion and gay marriage.