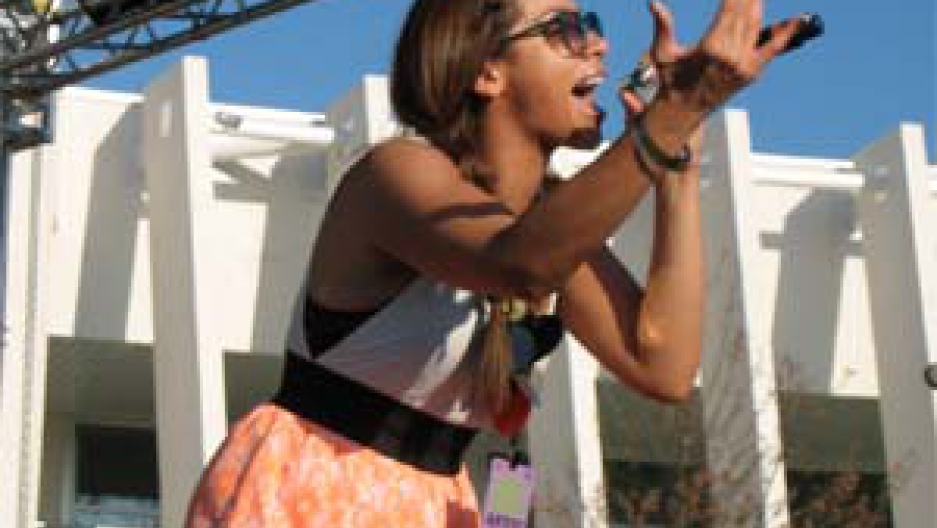 Hip-hop often gets a bad rap for being male-dominated and misogynist, but female MCs have been on the cutting edge of hip-hop since the beginning. The 80s saw outspoken artists like MC Lyte, J.J. Fad, Salt-n-Pepa and Queen Latifah; the 90s were dominated by Missy Elliott, Eve, and Lauryn Hill.

But If you take a look around this past decade, you might wonder: where the ladies at?

Fear not. Last month at the SXSW music festival in Austin, there was an amazing range of female hip-hop artists — from the provocative political rap of Detroit’s Invincible, to the soulful tunes of Nigerian artist Nneka, to the booty-shakin’ club rap of Chicago’s Kid Sister.

If you thought hip-hop was dead, Invincible says look no further than its women.  "The revival of hip-hop is the women in hip-hop movement.  We’re here to smack people out of their slumber and wake them up."

Invincible considers herself an "artist-activist" and started her own independent label in Detroit called Emergence Media. She organized the first Women in Hip-Hop showcase at SXSW this year.

Chicago rapper Kid Sister released her debut album, "Ultraviolet," last fall. Her deliciously fun "club rap" has already caught the attention of Kanye West, Cee Lo, and Estelle, who can all be heard on the album. But the best tracks don’t even need those heavyweights.

"I try not to focus on the whole feminist aspect of my life experience," she says. "It's good to be doing something new and different and visionary -- as a human being. So I don't look at it like I have this whole row to hoe and this cross to bear for women."

New York’s Maluca has just released her first single, "El Tigeraso." The electro-merengue track was produced by Diplo, best known for his work with MIA.

Maluca says it took some time convincing her "old-school" Dominican Republic parents that hip-hop was a viable career. Her mom suggested she look into managing a Chipotle instead.

"But recently she went to a show, and after the show she was like 'oh my god, Natalie, you're like a star!' So she got very excited, and after that show, she doesn't want me to manage Chipotle."

Nneka is Nigerian but got her record deal while living in Germany for a few years. Like Lauryn Hill, Nneka both sings and raps, and mixes styles from reggae to R&B. Her debut US album is called "Concrete Jungle."

She says her time in Germany helped her find her identity.

"If you are used to a place where there's so much noise, so much turmoil, plight, dread, poverty -- you see all these things in Nigeria. You also see the positive side, but everything is extreme. And if you are taken out of that and put in a place where, everything is structured and organized ... you have so much time to think of yourself. And that might do you good, but it could also destroy a lot if you do not make use of that silence."