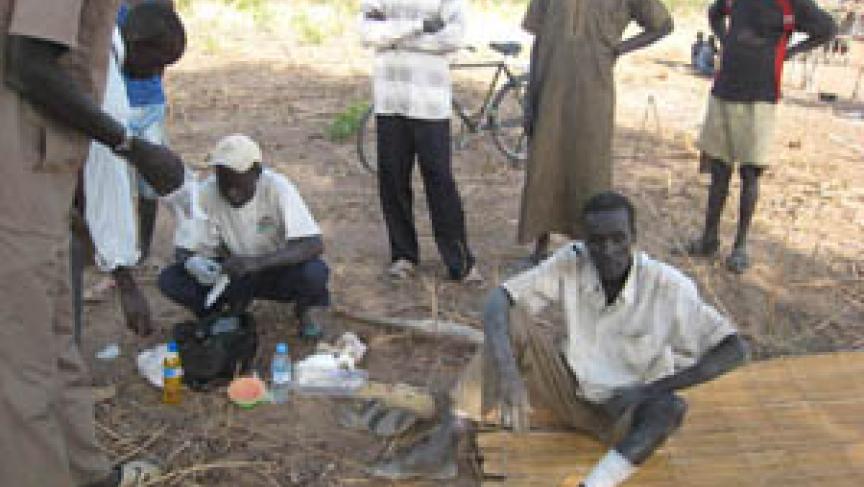 A global campaign to eradicate Guinea worm disease is tantalizingly close to success. The parasitic infection, caused by a worm that can grow three feet long before it emerges from a patient's body, now affects just a few thousand people per year. Almost all of the remaining cases are in Southern Sudan.

Former US President Jimmy Carter, who has helped lead the campaign, went there in February. His first direct experience with Guinea worm was in West Africa. He visited Ghana and traveled to a hard-hit village.

If you're not familiar with Guinea worm, brace yourself -- it's not a pleasant condition. You get it by drinking contaminated water. You don't know you've been infected until a year later, when you develop a painful blister. Then a worm slowly emerges. It can be as much as a yard long. And it can come out through your leg, your arm, just about anywhere.

Jimmy Carter says his most memorable encounter with the disease was when he met a young woman from the village.

"I thought she was holding a baby in her arms, and I went over to talk to her child ... I found out she was holding her right breast in her arm, instead of a baby. And a Guinea worm was coming out of a nipple of her breast. She was in excruciating pain. We found out later that year that she had eleven other Guinea worms emerge simultaneously from her body."

That was 1988. At the time, Guinea worm plagued millions of people in 20 countries in Africa and Asia. But a global campaign to eradicate the disease has been successful, and Guinea worm is no longer a problem in many of those countries.

Doctor Donald Hopkins launched the global Guinea worm eradication campaign 30 years ago. It started at the US Centers for Disease Control, but he soon moved the campaign to Jimmy Carter's Atlanta-based Carter Center. Since then, the Carter Center has helped countries set up national programs to defeat the disease.

Only a few thousand cases remain. And almost all of those cases are in one region of one country: Southern Sudan.

In the village of Lojora, in Southern Sudan's Terekeka County, it's hard to imagine a place more cut off from the modern world. There's no electricity, no shops, no roads. Just huts of mud and thatch scattered in the brush. A boy, naked and barefoot, herds his family's goats.

The village's chief, Jakeyo Le Yong Ladu, says when he was a boy, Guinea worm swept through his family.

Back then, villagers considered Guinea worm a curse, not a sickness that one acquired. No one knew what caused it, or how to prevent it. Even today, there's no cure for Guinea worm -- no vaccine and no drugs to combat it. But its transmission can be stopped if a patient is identified early and treated.

At the village, patient Dario Mere is being treated by two health volunteers who are leaning over his left leg. Mere is stick-thin and dressed in a tattered shirt. He sits on a papyrus mat. A worm pokes out of an open sore in his leg.

Simon Taban of Southern Sudan's Guinea Worm Eradication program supervises the treatment. He says Mere had multiple worms, the first of which was removed yesterday; the second one is getting removed today.

"As you keep pulling it -- slowly, slowly -- you keep massaging it until it finally comes out," Taban explains.

If the worm breaks, a portion of it stays in the patient, causing infection, inflammation and permanent disability. So day by day, inch by inch, the treatments continue. The worm is wound around a piece of gauze. When Dario Mere's worm finally comes out, it looks like a long strand of angel hair.

Until the worm is removed, it's critical that the patient stay away from water sources, like ponds, that locals use for drinking. If the patient bathes or swims there, the worm will release its larvae into the water, which will infect those who drink the water. And that is another critical part of eradicating Guinea worm: making sure that if people do drink from a contaminated water source, they can protect themselves.

The Carter Center and its partners distribute basic water filters, made of mesh cloth and plastic piping, that people in the village use to filter the larvae out. It's simple technology.

What's hard is distributing millions of filters to thousands of villages and making sure that everyone uses the filters every time. All it takes is one gulp of contaminated water and the goal of eradication can be set back another year. That's why Jimmy Carter ventured to Southern Sudan last month: to rally the local workers, and the public, for what he hopes is the final push.

If the global eradication effort succeeds, it'll be thanks to many people in many countries over many years. Carter likes to say he's just one of those people. Of course, given his prominence, he was able to bring money and attention to the fight. He helped make the world care about an otherwise neglected disease.

Carter, now 85 years old, says he would rank the defeat of Guinea worm disease near the top of his list of life's accomplishments.

He's already planning a return trip to Southern Sudan in a few years, when he hopes to celebrate the death of the last Guinea worm.