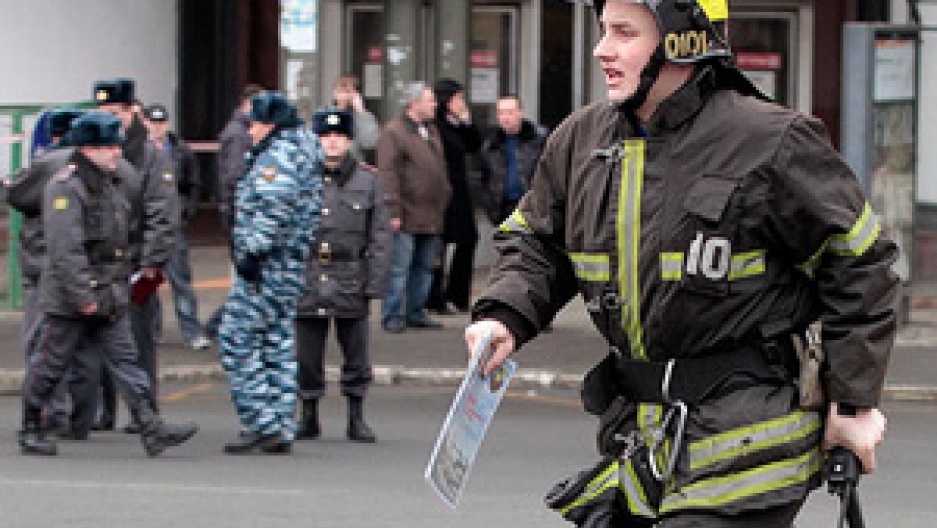 A fire-fighter and Interior Ministry officers work near the entrance of the Lubyanka metro station in Moscow March 29, 2010. (Image by Flickr user centralasian (cc: by-nc-sa))

On Monday, two female suicide bombers targeted subways in Moscow, killing at least 39 people. The bombers, wearing belts packed with explosives, blew themselves up on the Moscow subway just before 8 a.m., a time when the city is busiest with commuters. The first explosion took place on a train pulling into the Lubyanka station, and the second was at the Park Kultury station.

Russian security forces say Chechnya or a neighboring region in the Caucasus regions are likely behind the bombings, and Russian Prime Minister Vladimir Putin has vowed to destroy those responsible.

The capacity for a crackdown following the terror attacks is almost without limit, given Russia's Soviet history. In Russia's war on terrorism, it's Medvedev and Putins's move.

While some fear this could be the end of President Dmitry Medvedev's liberalizing of the Russian government and the return of Putin's iron fist, what is evident is their very different approaches to security issues in the country.

BBC Diplomatic Correspondent, Bridget Kendall, who is based in Moscow, says local papers had scathing criticisms of the government's security services the day after the attacks. Before then, she says, there were the beginnings of a more sophisticated discussion around how to deal with terrorism.

"There are people ... saying in order to tackle terrorism, you can't just go in with heavy weaponry and an armed fist; you have to have a more imaginary approach which gets to the ideas that engage these people, and you have to work harder at getting to the root of what is causing this problem. "

Heather Conley, director of the Europe Program at the Center for Strategic and International Studies, says President Medvedev had spoken just months earlier about the need to develop a more modern program to combat terrorism, calling for solutions aimed at economic development and the creation of more opportunity.

"But we'll see who wins out on this, because I think the urgency, and certainly the public reaction to this, may require Mr. Putin to step in and have more of an iron hand when it comes to trying to reign in the north Caucasus."

Putin's iron hand approach may mean tougher action by the Russian government in neighboring areas like Chechnya and Dagestan.

"I think there is a significant concern about human rights abuses," said Conley. "I would sense that there would be a strong crackdown, in the hopes of getting control of the situation."

President Medvedev expressed the need for more control on Tuesday. "We must be vigilant. Unfortunately, such actions are always well planned, are designed to kill as many as possible, and to destabilize society. This is why the police and security forces must keep people informed, and must keep the situation under firm control.