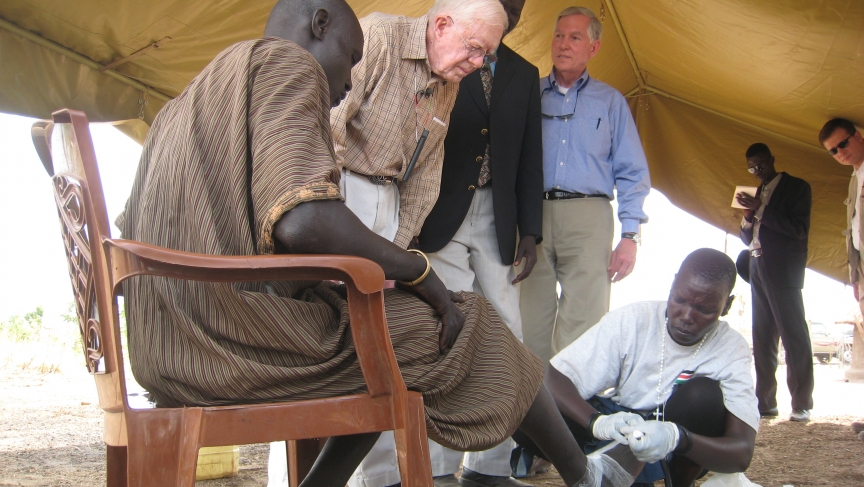 Former US President Jimmy Carter looks on as herder Garbino Kenyi is treated for Guinea worm in South Sudan.

Jimmy Carter’s first direct experience with Guinea worm was in West Africa. The former US President visited Ghana and traveled to a hard-hit village.

Now, if you’re not familiar with Guinea worm, brace yourself.

You get it by drinking contaminated water. You don’t know you’ve been infected until a year later, when you develop a painful blister. Then a worm slowly emerges. It can be as much as a yard long, and it can come out through your leg, your arm—just about anywhere.

“The most memorable experience was a beautiful young woman, I think about nineteen or twenty years old,” Carter recalled. “I thought she was holding a baby in her arms, and I went over to talk to her child, and I found out she was holding her right breast in her arm, instead of a baby. And a Guinea worm was coming out of a nipple of her breast.” The woman was in excruciating pain. “We found out later that year that she had eleven other Guinea worms emerge simultaneously from her body.”

That was 1988. At the time, Guinea worm plagued millions of people in twenty countries in Africa and Asia.

Not anymore. Only a few thousand cases remain. And almost all of those cases are in one region of one country: Southern Sudan.

“The last Guinea worm on earth will be from somewhere close to where we’re standing right now,” said Dr. Donald Hopkins, who spoke to me in Southern Sudan’s Terekeka County.

Hopkins launched the global Guinea worm eradication campaign thirty years ago. It started at the US Centers for Disease Control, but he soon moved the campaign to Jimmy Carter’s Atlanta-based Carter Center. Ever since, the Carter Center has helped countries set up national programs to defeat the disease.

Hopkins had come to Southern Sudan to check on the final push to eradicate Guinea worm. I met up with him in the village of Lojora. It is hard to imagine a place more cut-off from the modern world. The village has no electricity, no shops, no roads—just huts of mud and thatch scattered in the brush.

Village chief Jakeyo Le Yong Ladu said when he was a boy, Guinea worm swept through his family.

Back then, many considered Guinea worm a curse from God. No one knew what caused it, or how to prevent it. Even today, there is no cure for Guinea worm, no vaccine, no drugs to combat it. But its transmission can be stopped if a patient is identified early and treated.

On this day, the patient is a man named Dario Mere. He is stick thin, in a tattered shirt. He sits on a papyrus mat, while the village watches and two health volunteers lean over his left leg.

A worm pokes out of an open sore.

“He had multiple worms,” says Taban. “The first one was removed the day before yesterday.”

The second one is being removed today. A health volunteer gently pulls on the worm, trying to coax it out of Mere’s body.

“As you keep pulling it—slowly, slowly—you keep massaging it until it finally comes out,” Taban said.

When removing the worm, you don’t want to break it. That can leave a portion of it in the patient, causing infection and inflammation and permanent disability. So, day by day, inch by inch, the treatments continue. The worm is wound around a piece of gauze. When Dario Mere’s worm finally comes out, it looks like a long strand of angel hair pasta.

Until the worm is removed, it is critical that the patient stay away from water sources, such as ponds, that locals use for drinking. If the patient bathes or swims there, the worm will release its larvae into the water, and if people then drink that water, they will become infected.

So another critical part of eradicating Guinea worm is making sure that if people do drink from a contaminated water source, they can protect themselves.

The Carter Center and its partners distribute basic water filters made of mesh cloth and plastic piping that people here use to filter the larvae out.

It is simple technology. What is hard is distributing millions of filters to thousands of villages and making sure that everyone uses the filters every time. All it takes is one gulp of contaminated water and the goal of eradication can be set back another year.

And that is why Jimmy Carter ventured to Southern Sudan last month—to rally the local workers, and the public, for what he hopes is the final push.

While a chorus sang a welcome song, a line of white Land Cruisers approached the village of Lojora through the brush, kicking up dust. Secret Service agents stepped out, then the former US President. Jimmy Carter took a seat under a tent, beside a banner that read: ”Stop Guinea Worm in 2010.” Then he stepped up to a podium planted in the dirt.

“It’s a great honor and pleasure for me to come to this wonderful place in Southern Sudan,” he said to the assembled villagers. “We’re very grateful at the great progress that has been made here in reducing the incidence of Guinea worm. As you may know, when we first began our project in Southern Sudan, there were more than 100,000 cases that we found, and I’m sure there were many others that we could not discern at that time. Last year, we had about 2500 cases, and we believe that in the next two or three years, we’ll have zero cases of Guinea worm in Sudan.”

Then the motorcade left, and the village was back to its daily struggles.

And those struggles are considerable. These people are hungry and poor—in a land scorched by decades of civil war. The war is over, but tribal fighting remains.

And there is growing political tension, with nationwide elections scheduled for next month, and a vote on independence for Southern Sudan planned for next year. Many fear this region could spiral back into war, and that could undo the progress against Guinea worm.

“If we had to run away because there is fighting, or if the community is displaced and moving any direction where you cannot know where they went to, then of course you will be missing cases, and in that way there will be no chance of interrupting transmission,” said Makoy Samuel Yibi, the head of Southern Sudan’s Guinea Worm Eradication Program. “So that’s the worst nightmare actually for the program.”

Of course, if war resumes, the people of Southern Sudan will have a lot more than Guinea worm to worry about. But if peace holds, getting rid of Guinea worm could help this region rebuild and prosper. Farmers will be healthier—better able to plant crops. Children will be less likely to miss school—assuming, that is, they have a school to go to.

If the global eradication effort succeeds, it will be thanks to many people in many countries over many years. Jimmy Carter likes to say he is just one of those people. Of course, given his prominence, he was able to bring money and attention to the fight. He helped make the world care about an otherwise neglected disease.

President Carter is now 85 years old, and I wondered: Where would he rank the defeat of Guinea worm on his list of life’s accomplishments?

“I would say very near the top,” he said. “You know, we brought peace between Israel and Egypt, and we opened up diplomatic relations with China, and did some other things that I need not mention. But I think that when we see the last case of Guinea worm gone from the earth, there would be few if any other achievements of my life of which I would be more proud.”