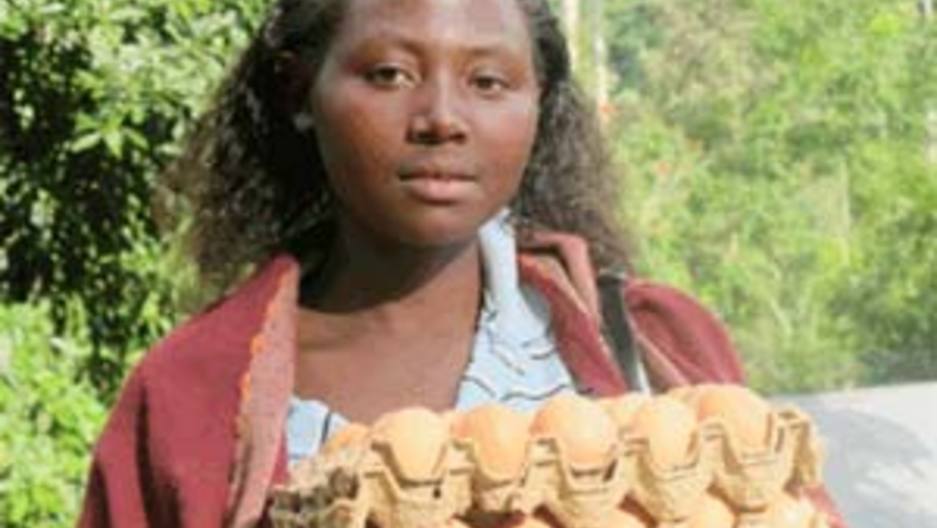 In Uganda, as in much of Africa, many women work as farmers, and many of them are very poor. Women often don't own the land they farm, and can't get loans to buy high quality seeds. In East Africa, there's a movement to help women farmers with a low-tech solution that could help them build a nice little nest egg.

Bhoma looks like a typical town in Uganda. The land is green and rolling, the roads dirt and the buildings made of mud plaster. Tiny shops line the road, selling salt, biscuits and eggs, while barefoot kids run and play.

And like most places in Africa, Bhoma has chickens, scavenging around town. But here, chickens also mean business.

Twenty-four-year-old mother and entrepreneur Chance Christine dips a blue plastic bowl into the store-bought feed she calls mash -- a mix of corn and vitamins. Holding her crying, coughing 14-month-old in one arm, she unlatches the door to the chicken coop.

Inside are about 70 small, brown hens ready for their breakfast. They dash to the feed, leaving their precious eggs behind. Christine holds one egg up to her ear and gently shakes it to see if it's fresh and unfertilized.

"I shake it and if nothing moves, the egg is good," Christine says, speaking in Ruchiga. "If something moves inside, then the egg is not good."

It's the most mundane of scenes -- smelly chickens, crying babies -- but these chickens are perhaps Christine's best chance to get her family out of poverty.

Christine noticed that people were going to the neighboring town to buy eggs. So, she says, she started raising chickens to cater to the community. With help from a local group, Christine took out a loan and started a chicken business.

"If we want to help women and children, I think investing in local chicken is very, very important," says Anthony Mugisha, a Professor of Animal Health and Social Economics at Makerere University in Uganda's capital city, Kampala. He also works with the UN Food and Agriculture Organization (FAO).

"To sell a cow it takes big decision; it's a big animal," Mugisha explains. "But if you need salt, you need paraffin, you need soap -- just pick one chicken and sell it in the market and get money. It solves immediate problems. When people talk of food security, they think of crops, but you can find there are some households where they have enough food -- they've got bananas, they've got maize -- but the children are undernourished because they are not getting the balanced diet of animal protein."

And there are other reasons why raising chickens in Africa makes good sense. For one, as the population increases, available land decreases, yet farmers don't need a lot of land to raise chickens. Grazing cattle in a changing climate is also unpredictable, but chickens can cope with drought and flood far better than cows. Chickens also turn grains into high value protein, fast. And for women farmers, chickens are socially acceptable to own and sell, without asking a man's permission.

"I take care of a household of sixteen people," said Clementia Nakate, speaking Luganda. "Some are my biological children; others are orphans and grandchildren whose parents have died."

Nakate is a tall and lean, 55-year-old woman who lives in the Rakai District of southwestern Uganda. She lost her husband in 1999 to AIDS, and like many women in the area, she now cares for grandchildren and orphans, even though she too is HIV positive.

When her husband died, Nakate received support from CIDI -- the Community Integrated Development Initiative -- one of many grass roots NGOs across Africa working to promote poultry farming for women's empowerment. Tanzania, South Africa, Ethiopia and even Bangladesh have all adopted similar programs. They also encourage women like Nakate to form farmer cooperatives.

"Our group is mainly made up of widows," said Nakate. "We share and counsel together, and they help me to be emotionally well. We also visit each other during the month to share ideas on how to improve our lives and our chicken farming."

Dan Kigula is an extension agent -- really, a poultry proselytizer -- for CIDI in this part of Uganda. Village women call him "Mr. Chicken."

Of course, raising chickens is not a miracle cure. Fast spreading diseases like Newcastle can wipe out whole flocks. The cost of commercial feed keeps rising and good markets can be hard to find. And so women adapt and innovate. Nakate decided to raise only local chicken breeds, which require less costly feed.

And Chance Christine has found a way to tap into the tourist trade. She approached lodges in nearby Bwindi, where Europeans and Americans come to track gorillas. At more than $3 dollars a tray, she can make about $90 dollars a month delivering eggs to this lodge alone. That covers the cost of feed. It will also cover the cost of school for her children, a luxury her parents could not afford for her just twelve years ago.