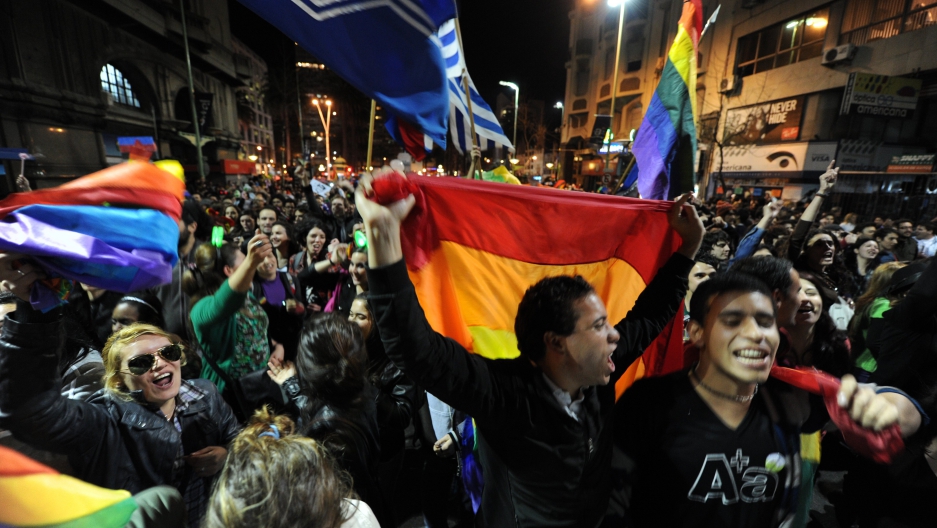 People dance and cheer during the annual Gay Pride Parade in Montevideo, on September 30, 2011. Hundreds of gays, lesbians and people supporting them in their fight for equal rights for homosexuals, took part in a cheerful and colorful parade along Montevideo's main avenue by night.
Credit: Pablo Porciuncula
Share

Editor's Note: We invite you to explore the global struggle for gay rights in 20 countries through Rainbow Planet's interactive map which features population statistics, spending power, legal struggles, advances and setbacks and, most importantly, voices of men and women who are lesbian, gay, bisexual and transgender.

BOSTON — All across the world, countries, cultures, societies and religions are struggling with the issue of gay rights.

Over the last year, GlobalPost correpondents from China to Chile, Uganda to Lebanon have reported on compelling stories of the struggle of lesbian, gay, bisexual and transgender (LGBT) people for their rights.

Our stories recorded legal advances, like in Spain and Argentina, as well as setbacks, as in China, and complicated stories of how traditional societies are grappling with the issue, like in Senegal.

As the stories accumulated, we recognized that gay rights is an issue that resonates around the globe and so we decided to do this survey of 20 countries. Our team found lightness, dark and most of all a half-light, where some progress in gay rights has been achieved but there are still obstacles.

In Australia, Sydney’s Gay Pride parade is a festive carnival-like street celebration where thousands of tourists go to see transvestites in extravagant costumes cavort with musclemen. It would seem that the land down under is a place where gays can enjoy full rights and tolerance. But our reporter found that Australian laws do not allow gay marriage and in our interviews some Australian gay men say they still do not feel comfortable or safe.

The worldwide struggle for civil rights for gays has met with opposition from some religious groups. GlobalPost columnists have explored different sides of these issues.

Right now Uganda is a flashpoint for gay rights because of the “Anti-Homosexuality Bill” currently before the parliament of that central African country. Proposed by a Ugandan Christian, who had been a close associate of prominent American fundamentalists, the proposed law calls for the death penalty for those convicted of “aggravated homosexuality,” a new crime defined by the bill as gay sex with an underage person, an HIV positive person having gay sex, a person using alcohol or drugs to seduce someone into having gay sex or a serial offender.

(To hear from the gay community in Uganda, watch this video.)

Crowds in Kampala demonstrated in favor of the bill and at first many Kampala-based commentators thought it would pass easily. But resistance to the bill grew domestically and internationally. The influential U.S. pastor Rick Warren issued a statement denouncing the bill. Then Uganda President Yoweri Museveni distanced himself from the bill, saying it was not simply an issue of domestic politics but it had become a “foreign policy issue.” Now its passage is not certain.

In Brazil, same-sex relations are not criminalized so, according to a popular song, “there are no sins south of the equator.” Although the country has a reputation for openness and sexual freedom, the actual legal rights of gay, lesbian, bisexual and transgender Brazilians are not clear. The courts are ruling on several cases over topics ranging from inheritance to the rights of same-sex couples to adopt. Despite growing public acceptance of homosexuality, there has been a wave of murders based on sexual orientation, 190 in 2008.

This Rainbow Planet series also features gays telling absorbing stories about the situations in their countries. Some say they are relatively happy, some say they feel they must hide their identity and others say they are afraid for their safety. These quotes from the countries in the survey give a ground level account of what the situation is like for gays.

The survey looks at the legal situation in 20 countries from South Africa, where the rights of gay people and other minorities are enshrined in the constitution and same-sex marriage is legal, to Afghanistan, where under Shariah law same sex relations are illegal.

The legal situation rarely tells the full story, however. In South Africa, for instance, there are still many hate crimes committed against gay people, such as the rape and murder last year of a member of the national women’s soccer team, who had said she was a lesbian. And in Afghanistan, there is a traditional practice in which a man has sex with a young boy.

In no country is the situation fully clear. Rainbow Planet shows the complicated stories of the gay rights efforts worldwide. There are horror stories and there are advances. We have gathered information and narratives to improve understanding of the struggle for gay rights in all its complexity.