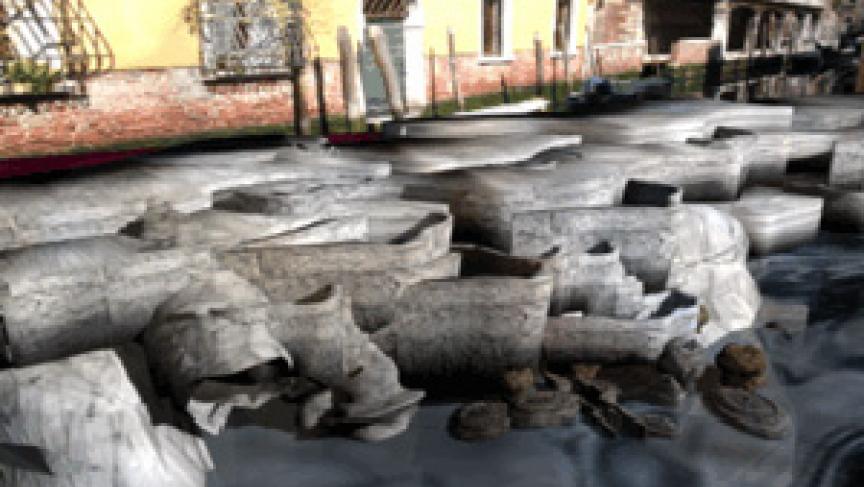 Growing an artificial limestone reef under Venice is an example of how biological systems can be incorporated into architecture. (Photo: Christian Kerrigan, Living on Earth)

Recently, "Living on Earth's" Jeff Young examined some of the changes humans will experience by 2020. The following is a summary of some of the developments we have to look forward to in the next decade according to a few of the experts Young talked to:

The world's languages are evolving. Some are dying out and others are changing so fast, dictionaries will have to take on new forms to accommodate all the new words.

"We are losing a language every two weeks," said David Harrison of the Living Tongues Institute.

Hundreds of native languages are expected to die by 2020 -- unless Harrison has his way. From Chulym in Siberia, to the endangered Panau language in Papua New Guinea, Harrison is working to preserve native languages that are fading with time.

One of Harrison's projects for the Living Tongues Institute involves helping some of these small languages cross the digital divide, making them suitable for text messaging and for posting on social networking sites.

"And I've created a suite of talking dictionaries for some small and not very well-represented languages," said Harrison. "I'm right now in the process of turning the talking dictionary into an iPhone application. So, you would actually be able to have your iPhone and to download and play and listen to sound files from very small languages that are maybe endangered, or may not be very well represented in cyberspace yet, but they will be. And this is really the key.

Harrison believes once these languages have a door open to high tech domains, they will adapt.

"They will develop all of the little shortcuts that we have in English, the sort of 'LOL' text messaging abbreviations and things," said Harrison. "They will adapt perfectly because adapting to new circumstances is really what languages do best. It's not an inevitability. Small languages do not have to be extinct. They don't have to be oppressed out of existence. There's room in the world, there's room in the human intellect for a diversity of languages."

Technology will continue to shape our tongue in the coming decade, bringing radical change to that ultimate arbiter of the English language: the dictionary.

Lexicographer Erin McKean once edited the New Oxford American Dictionary. Now, she's working to close the book on dictionaries, as we know them.

She believes the print book form necessitates the exclusion of a lot of words. "Even the Oxford English Dictionary has fewer than a million words in it, and it's pretty easy without even doing a whole lot of heavy lifting to find more than, say, four million unique English words."

To McKean, a dictionary shouldn't dictate what words we use.

"'Cromulent" is actually from an episode of "The Simpsons," and means "okay." McKean says once a word has been used, it becomes a real word. She doesn't think words should be discarded because someone has made the decision that it's not a proper word.

"My job is to map the language," said McKean. "So, I tell you where everything is, and what it is. But I don't leave the red-light district off the map because I disapprove of it."

From living languages to living buildings: Rachel Armstrong advises architects on how to incorporate biological systems into their design work. Her work currently involves a system called the protocell.

"Protocells are self-assembling, autonomous, very primitive chemical systems that have some of the properties of living systems, but are not strictly speaking alive,"  Armstrong explained. "They are capable of life-like processes such as growth, movement, sensitivity and I think these protocells are going to be incredibly important for us in the next ten years or so, in that we will develop materials that we can put on the outside of buildings that can take carbon dioxide from a carbon-rich air that we produce in the cities and around our homes and factories, and then we'll trap the carbon dioxide and fix it as a solid material on the outside of the buildings. And we will see our buildings transformed by these materials that are carbon fixing. This is going to give quite an interesting appearance to a community of houses."

According to Armstrong, being able to see the material created by carbon dioxide on our houses will get us closer to understanding how our carbon emissions really affect our environment.

"We blossom when we're in complex ecologies," said Armstrong. "And I think that synthetic ecologies and synthetic organisms are going to be an important part of that integrated balance that we should attain if we are able to behave in a more responsible and grown up manner towards all living forms on the planet."

A lot of the problems we'll face on the planet in the coming decade may be of our own making, but astronomer Neil DeGrasse Tyson says we'll also need to keep an eye on the sky. Tyson directs the Hayden Planetarium at the American Museum of Natural History in New York, where, among other things, he keeps watch on an asteroid called Apophis.

"You know the solar system's a shooting gallery," said Tyson. "And Earth, many people don't know, plows through several hundred tons of meteors a day. So, the range of these that could hit us is huge."

Apophis was discovered in 2004, according to Tyson, and it's about the size of the Rose Bowl. By calculating the orbit, scientists predict it will come very close to the Earth on April 13th 2029.

"It will come closer than Earth's orbiting communication satellites," said Tyson. "It'll be the biggest, closest thing we've ever seen in the history of history. It'd be visible from northern Europe and it's basically – think of it as a shot across our bow. The universe saying, 'I'll miss you this time, but I'll give you another chance to try to deflect me.'"