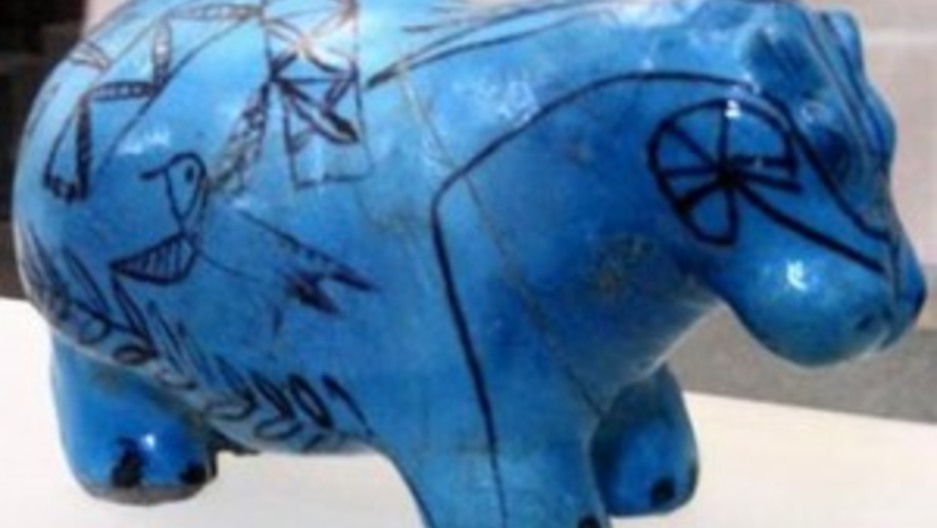 Cairo is dirty, loud, and almost unbearably noisy. When I was there over the winter holidays, I had to work not to become overwhelmed by it all. When I needed a respite from the din, I spent the afternoon at the legendary Egyptian Museum.

Still, there was a kind of overwhelm at play inside the museum too. It's gigantic in terms of size and scope, and easy for a visitor to get distracted by such exotica as perfectly preserved mummies, or the magnificent display of Tutankhamun's gold chariot.

But the piece I loved best was a small statuette of a hippopotamus, standing quietly and nobly in a dark corner of a neglected hallway. Made of Egyptian fiaence (a type of ceramic), it was a gorgeous shade of turquoise blue, with painted-on depictions of plants and birds in black.

What struck me first was the color: how had it managed to survive so vibrantly for more than 3,000 years? Then there was the simple, whimsical beauty of the object itself. I read later that the hippopotamus often appeared in hunting scenes on tomb walls to symbolize order over chaos.

As the visitors crowded past me, their respective guides chattering in an array of languages, I realized that no one else was looking at the hippo in its case.

It was a nice reminder. The biggest, the brashest, and the boldest aren't always worthiest of our attention. Who knew you could find beauty amid disharmony, and order amid chaos, in the form of a small, blue hippopotamus.