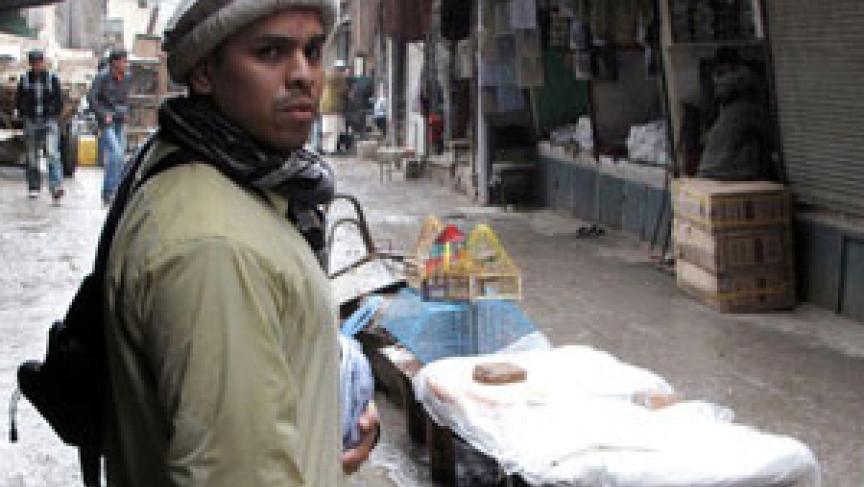 Felipe Coronel was born in Lima Peru, and came to the United States with his parents when he was two years old.

"My name is Felipe Coronel, people know me as Immortal Technique. People know me as a rapper and as a revolutionary -- an activist of sorts. I’ve not only tried to get that across in my music but also in the work that I do outside of music."

The Peruvian-born rapper and political activist is on a mission to help orphans in Afghanistan -- quite a contrast to his wild years as a teenager and the 12 months he spent in prison.

The understanding of right and wrong didn’t always stick with Coronel and in high school, he says, he wasn’t exactly a "model student."

"The people I grew up with had like a selective morality. You know, if you look at me funny or if you say something to me that I think is disrespectful even in the slightest way, I’m going to come at your throat and I’m going to make you feel like you should have never come across my path that day. I mean I used to be a very different individual than I am now, not in terms of the fundamental morals, but I think I blinded myself to a lot of things purposely. It was easier for me not to care. I took that type of attitude with me to college when I got there."

Coronel spent a year and a half as a student at Penn State. He got into a lot of fights, was arrested numerous times and amassed several felony assault charges.

"Eventually I came to the realization that I couldn’t beat all of them and that I was going to go to prison."

He spent 12 months in. While in solitary confinement an older inmate gave Coronel a pen and he began writing.

When he got out on parole in 1999, he moved back to Harlem, gave himself the name Immortal Technique, and he started winning battles in the underground hip hop scene. Within a few years he developed a very large fan base.

In 2006, after several years putting out albums and rigorous touring, Coronel was approached by an Afghan-American woman named Shamsia Razaqi. She had just formed a non-profit organization called Omeid International.

"Their goal was to build a school, an orphanage and a medical center in Kabul," said Coronel. "And we had a long discussion about how, after the Russian invasion, there were lots of people that were orphaned and lots of refugee camps in Pakistan and in Iran.

"When people talk about who the Taliban really are ... they come from those refugee camps. And they were people that were drafted into these fundamentalist groups."

The idea was that children were drafted into these groups as a way to survive, and says Coronel, if they had an alternative, they wouldn't have to choose help that came with fundamentalism.

And so he raised close to $50,000 for Omeid International through a series of benefit concerts, and from sales of his CD, "The Third World," which was released in June 2008.

Coronel traveled to Afghanistan to help start the orphanage in Kabul. "In Harlem in the hood, you might grow up hearing a gun shot here or two, in the distance or across the street. But there it’s a whole other world. You don’t hear a little bang bang, you hear [machine gun fire]. That’s a different sort of violence that occurs in the street.

"The beauty of it was that every person got involved. Because when you see the kids come in at first, they would be wary, but then by the afternoon -- when they realized no one was trying to discipline them by hitting them, no one was screaming at them; it was just look we’re here to provide you a place to live -- by the afternoon they were all playing like Kung Fu games upstairs, running around."

Coronel, or Immortal Technique, says the that experience of being there in Kabul with those orphaned children changed him.

"It made me glad that I have my mother and my father. You know I know not everybody has the best relationship in the world with their parents. But at least to have somebody that is willing to provide for you; that loves you enough to say, I’m not going to abandon you. It made me look at the future of what I’m going to do one day. And say hey you know what, when I get to be a father, I’m going to be there. Today it’s just going to be you and me ... because I saw the way it changes people’s lives.”

And this is what Immortal Technique wants to do with his music. Change people’s lives and get them to think.