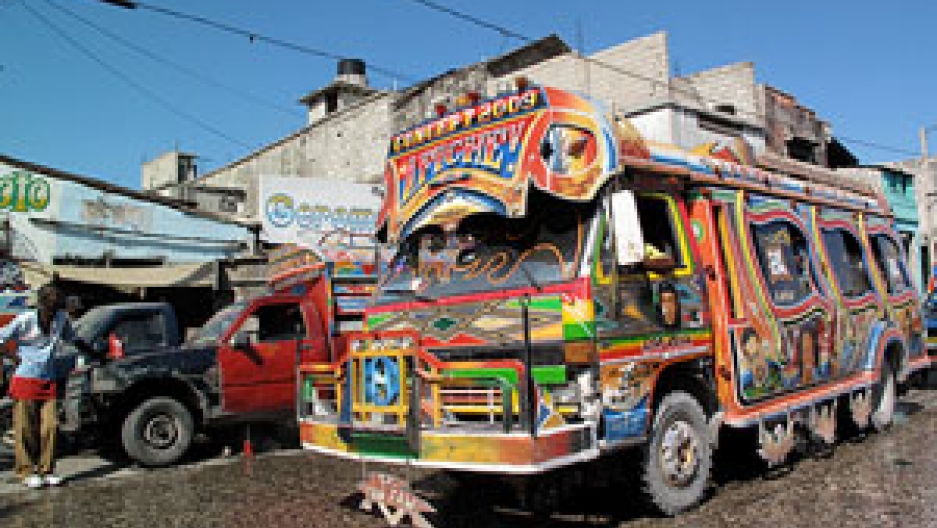 The Port-au-Prince art event was called “Ghetto Biennale.”  It featured 35 art projects from around the world from sound sculptures to a portable photo studio. A bustling boulevard in downtown Port-au-Prince seems an unlikely place for an art installation.  But, towering over a vacant lot is a 20-foot-tall statue of Legba, the voodoo spirit guardian of the gateway.  It’s made out of a car chassis and chunks of a defunct truck.  Its creator is André Eugene, one of the sculptors of the Grand Rue.

Eugene also helped dream up the idea for the Ghetto Biennale.  He says in 2004, the Grand Rue artists were invited to participate in an exhibition in Florida.  They sent over their work, but they were denied Visas, and couldn’t attend the opening.

"So the whole idea was, you know, it’s the mountain and Mohammed," says the Biennale co-creator, Leah Gordon.

"If they can’t go to the Biennales, then let’s bring the Biennale here, so that’s really the sort of idea behind it."

One of the visiting artists calls herself “Frau Fiber.”  Her real name is Carole Frances Lung; she’s a textile artist from Los Angeles.  Her project involves something the locals call Pepe.

"Pepe is basically garments, primarily from the United States, that are thrown away, given to second hand places, and they get bundled up and shipped to Haiti, and what that has done here in Haiti is basically decimate local garment production."

Frau Fiber has a local collaborator, a tailor named Jonas Labaze.  He says, basically, "we’re doing a transformation.  We take old clothes, and we transform them into something different, something brand new."  Labaze hopes to continue the project after the Biennale is finished, and Frau Fiber says she’ll try to market the recycled garments back in the United States.

It’s not just visual artists here at the Biennale.  Sound Artist Robert Peterson came from Louisiana.  He says this is only his second trip abroad, but he felt at home here immediately.

"The sort of sights, the smells, the life of the people, the electricity on the street is remarkably similar to where I consider my home, which is Louisiana, New Orleans.  The music is the most remarkable similarity.  When I heard the music of the brass bands, it sounded exactly like the 2nd line in the Mardi Gras parades.  That made my heart explode."