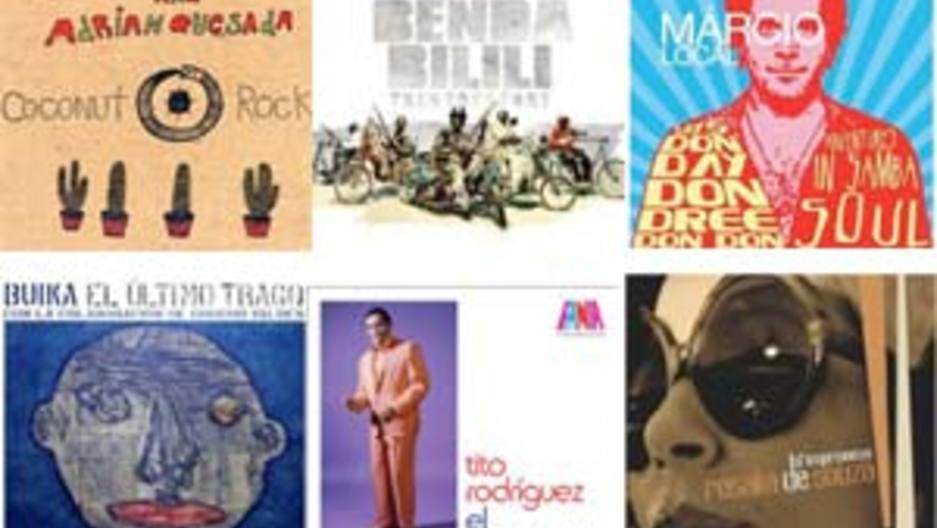 It's the time of year for lists, and "The World's" Marco Werman with Tom Schnabel, host of "Cafe LA" on KCRW/Santa Monica, share some of their picks for the best in global music of 2009:

WERMAN: I’m going to let you go first. What really grabbed your ear this year?

SCHNABEL: The first one is the second record to come stateside by Buika. She is an artist who is based in Spain. Here parents came from Equatorial Guinea and she has a new album out which is called "El Ultimo Trago" --"The Last Drink." The album is dedicated to Chavela Vargas, the great Mexican singer and these are songs of heartbreak and suffering and Buika does them justice. She’s working here with Chico Valdez, the great Cuban piano player and the synergy is so obvious from the very, very first track. Every track is great.

WERMAN: Great pick Tom. I have to say that’s the second year in a row she makes our top ten because her album "Nina de Fuego" from last year was on my top ten. So we’re setting a tradition here.

My first pick Tom is a group from Congo called Staff Benda Bilili. They have everything. They’ve got this uplifting story of being wheelchair-bound polio cases living in the Congolese capital Kinshasha, on the street. It’s incredibly upbeat music and not just because they give off this life force from their wheelchairs. Unfortunately they’re not touring the United States until next year. And by then I hope many Americans are well across the great debut release that came out in 2009 called "Très Très Fort" – very, very strong.

SCHNABEL: That almost had a doo-wop kind of feel.

WERMAN: Exactly. So what do you have next for us?

SCHNABEL: This is a reissue, but it’s a special reissue because they improved the sound finally. The Tito Rodriguez Fania sides have just come out through a new company called Código. Fania reinvented tropical Latin music in the late 1960s and early 1970s. There were just an absolute powerhouse and Tito Rodriguez was one of their big stars. Of course Ruben Blades and other people were there too. But this is such an incredible album. They chose the tracks really, really well.

The new album of classic reissues beautifully packaged in a two-CD set is called "El Involvidable" – "The Unforgettable."

WERMAN: So from the original retro stuff to the modern take on Latin retro. My next pick is Ocote Soul Sounds and Adrian Quesada. The album is called "Coconut Rock." Adrian Quesada is the band leader of Austin, Texas’ very own Grupo Fantasma, and the rest of the band, Ocote Soul Sounds, they are alumnus from Grupo Fantasma and the Brooklyn Afro beat ensemble Anti Balas. So if you ever wanted to know what Eddie Palmieris' Harlem River Drive project sounds like up to date; what Afro -- even Turkish -- retro sounds sound like produced today, just have a listen to this album.

SCHNABEL: Marco that is a really cool groove. I have to find out more about this band.

WERMAN: Yeah no you’ve got to get hip to Ocote Soul Sounds and Adrian Quesada. They are constantly kind of reforming their group and giving themselves sort of new names and coming out with new albums so you’ve got stay on top of these guys. They are very busy and they’re very talented.

SCHNABEL: They’ve introduced a new genre to world music too.

WERMAN: Which one is that?

WERMAN: Yes indeed. Do you have a new genre for us? What’s your next pick?

SCHNABEL: Well this isn’t a new genre. Well maybe it is actually. This is a collaboration between a Norwegian guy named Jon Balka and a Moroccan singer named Amina Aloui. The sound is just so exotic and it’s both kind of modern and yet very, very ancient. The poem adaptations come from poetry of the Arabic Andalusian period and it’s just a completely amazing soundscape and musical voyage.

[The album is] called "Siwan."

WERMAN: And we’ll go out with my last pick. Marcio Local made his US debut live in concert in New York last January. I wasn’t blown away by his show but I have been listening non-stop to his CD which has the very entertaining and onomatopoeic title "Don Day Don Dree Don Don."