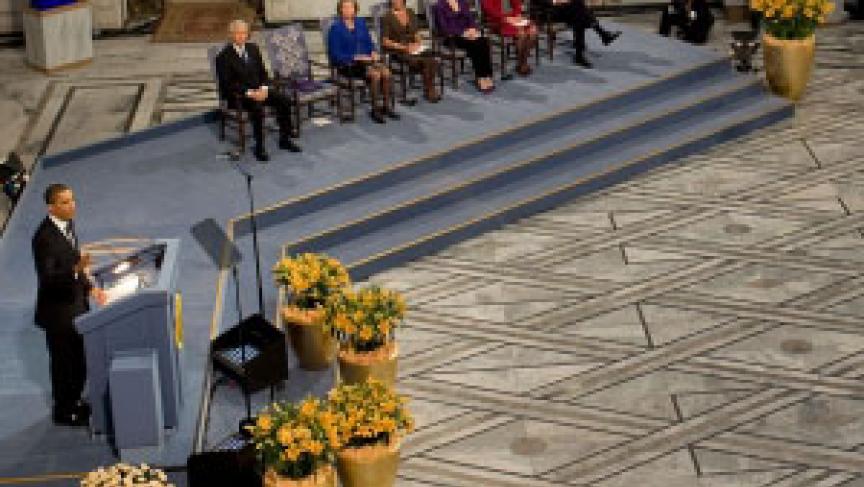 President Barack Obama said the US must uphold moral standards when waging wars that are necessary and justified, as he accepted his Nobel Peace Prize. In his speech in Oslo, he defended the US role in Afghanistan, arguing the use of force could bring lasting peace.

"I do not bring with me today a definitive solution to the problems of war," said President Obama. "What I do know is that meeting these challenges will require the same vision, hard work, and persistence of those men and women who acted so boldly decades ago. And it will require us to think in new ways about the notions of just war and the imperatives of a just peace.

"We must begin by acknowledging the hard truth that we will not eradicate violent conflict in our lifetimes. There will be times when nations -- acting individually or in concert -- will find the use of force not only necessary but morally justified."

Political philosopher Michael Walzer has spent a lot of time thinking about the justifications for war. He says the President's approach -- achieving peace through war -- is a crucial point to make to the international community.

"I think his sense of the use of force within a lot of constraints, which he talked about, is especially important in Europe, where even more than in the United States there's a growing reluctance to use force at all -- even in cases like Bosnia or Kosovo or Darfur, where it would seem to me obviously necessary."

The notion that violent conflict cannot be erradicated in our lifetime isn't based in cynicism, said President Obama, but in what history has shown us.

"I face the world as it is, and cannot stand idle in the face of threats to the American people," the President said in his speech. "For make no mistake: evil does exist in the world. A non-violent movement could not have halted Hitler’s armies. Negotiations cannot convince Al Qaeda’s leaders to lay down their arms. To say that force is sometimes necessary is not a call to cynicism -- it is a recognition of history; the imperfections of man and the limits of reason.

"I raise this point because in many countries there is a deep ambivalence about military action today, no matter the cause. At times, this is joined by a reflexive suspicion of America, the world’s sole military superpower."

If President Obama is trying to set a benchmark for justifying military action, Walzer says self defense is the most obvious example, and that Afghanistan fits this model.

But there other examples, like Rwanda, where force is needed to defend others who are at risk. "That's a new doctrine, the doctrine of humanitarian intervention," said Walzer, "which implies that sovereignty does not extend, as I think it obviously does not extend, to mass murder."

Walzer believes President Obama's speech was targeted at American allies who he is trying to convince to send more troops to Afghanistan.

"It's ... the right thing to do," said Walzer of the speech. "And I think especially so in Europe today, to tell people that if you want the peace in the Balkans, or peace in East Africa, or in Southeast Asia, you may have to use force to get there."

Michael Walzer is professor emeritus at the Institute for Advanced Study at Princeton. He's also the co-editor of the "Quarterly Dissent" and the author of "Just and Unjust Wars," among other books.