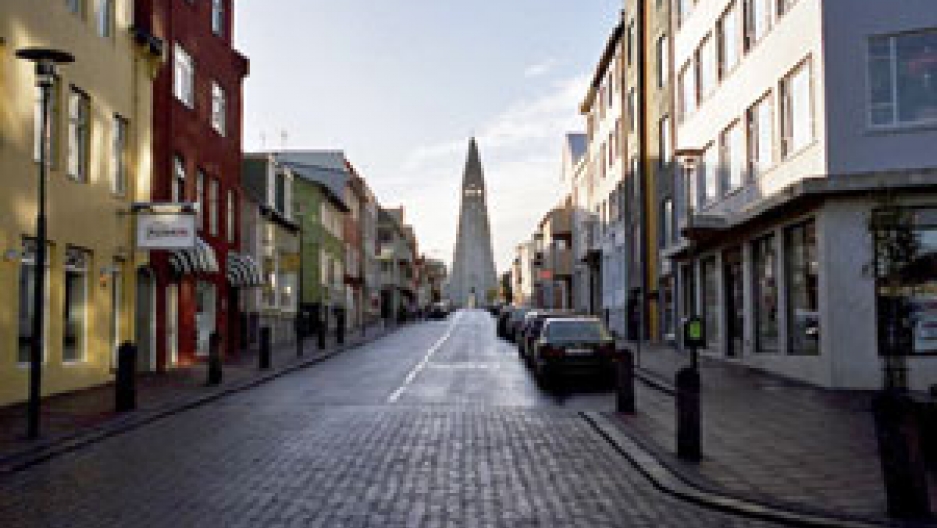 Iceland has been one of the countries hardest hit by the economic crisis. One thing it still has going for it is its draw for American artists, writers and musicians.

New York-based writer Alissa Quart visited Iceland recently and found that even after she got home, Iceland still lingered with her. She contributed the following story to PRI's "The World":

I went to Iceland three months ago because I knew it was a country of paradoxes. For starters, there are only about 300,000 Icelanders. Yet most of them are really literate. Much of the small island is covered in ice. Yet their homes are heated by scalding water that literally runs under the ground.

I bought into Brand Iceland. I visited the art spots Reykjavik, Stykkiholmur, and Budir. I swam in a hot river and slept in a hotel where the walls were painted lichen-green. When I came back to New York, I was still seeing traces of Iceland everywhere. There was even a new Iceland-themed exhibit by the American artist Roni Horn. It’s going on at the Whitney Museum right now.

Horn’s show is full of pictures of Iceland: geothermal water, taxidermist birds, faces floating on the surface of hot springs. She’s drawn to the isolation, the communal atmosphere, and above all, the landscape.

Donna De Salvo curated Horn’s show. She sees the draw of Iceland like this:

“You know the extremes, where you have volcanic activity marching right down to the sea, and this collapse in a sense for us at when you live in an urban environment like NY to see this extreme range of terrain is just magical."

Iceland has long attracted other American artists. Call it Artland. Yoko Ono, Richard Serra, and the poet Anne Carson all came here looking for a muse. Same with Eileen Myles. She just wrote "The Importance of Being Iceland."

“Iceland is really interesting because it just happened to be to the side in a way so certain things could continue to exist and certain people could have a self-effacing way of looking at their own culture.”

I love that Icelandic self-effacement. There’s that appeal of their music and literature. It’s all about stubborn iconoclasm. An experimental writer like Myles could seem odd in the world of American letters. But in Iceland, odd is perfectly normal.

Eileen Myles: “Icelandic artists are really proud of how many odd strange people who’ve lived in odd strange ways were part of their history American artist wouldn’t go for a folkish approach to who we are and really claim lineage to these oddballs, there’s a kind of funky pride.”

While Iceland was a dreamscape for artists, it was also floating by on a wildly inflated economy of credit. Iceland’s fishing culture had migrated into banking and boutique hotels. Then it all crashed.

“We are living inside it like inside the crisis situation we are like really hoping that inside Iceland’s economy we are heading toward this metaphor of an Iceland as a health and beautiful place where you can go way like an asylum and I really hope we will go there so at this moment, the guest’s eye, the metaphors of others, it’s so helpful.”

These metaphors may not help much in the end. But Iceland will still have its amazing, strange indie music to keep Artland alive. All those heated, water-logged dreams.