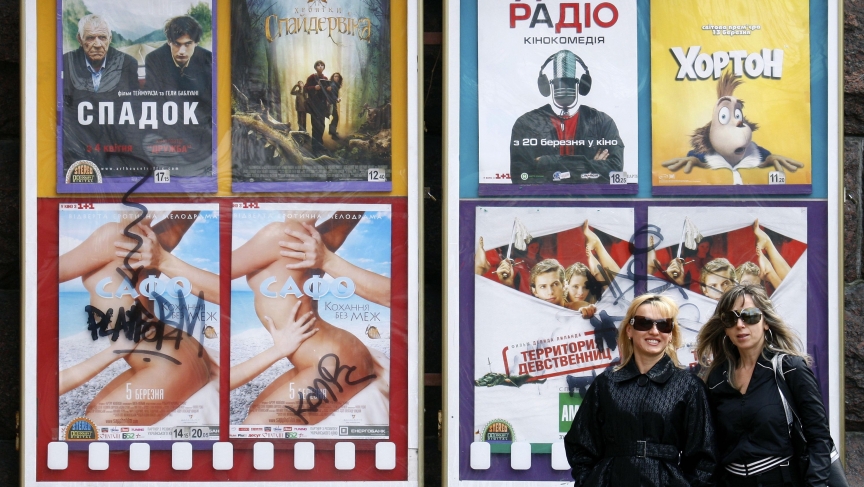 Women walk past a movie theater in central Kiev. Cinemas are the new testing ground in the debate over how to promote the Ukrainian language in the country of 46 million after centuries of dominance from Moscow.

Language is one of the most vexing aspects of life in Ukraine, not least for foreigners.

[Editor's note: this story was first published in November, 2009. The Ukraine-related material in the audio player starts five minutes in.]

Before moving here last August, I didn't know which language to study. I'm still not sure. In Kiev, you see Ukrainian on street signs and on packages of food in grocery stores, as required by law. But on the street, you hear more Russian.

Like a little boy and his mother talking to a man selling miniature cactuses in Kiev's Botanical Garden. “They're speaking Russian — the seller and the mother and child,” says Laada Bilaniuk, an anthropologist at the University of Washington and author of the book "Contested Tongues," about Ukraine's linguistic landscape.

A few steps away, two women are standing behind buckets of brightly-colored roses. “Those two ladies, they're speaking Ukrainian,” says Bilaniuk. She says most Ukrainians are bilingual. They have to be.

“Right now you can't watch television without knowing both languages because the one person might be speaking Ukrainian and the other answering in Russian, or they'll switch half way through.”

The country's bilingualism is made easier by the fact that the two languages are closely related. Both use the Cyrillic alphabet, and about one third of the words are similar.

While this linguistic co-existence may seem peaceful, for many Ukrainians, it's also a political flashpoint. Some — including [now former] President Viktor Yushchenko — want to reverse the effects of two centuries of Russian cultural dominance and outright suppression of the Ukrainian language.

Yushchenko is a native Ukrainian speaker. He argues that his country's survival is at stake. He said recently, “If a nation loses its language, it loses its memory, its history and its identity.”

Volodymyr Kulyk agrees. He's a researcher in ethnic studies at the National Academy of Sciences of Ukraine. And, like Yushchenko, he’s a native Ukrainian speaker.

“Ukraine separated from the Soviet Union, but Ukrainians are still not separated completely from Russians mentally, culturally, and — for some — politically,” he says. “If we all have Russian in common, how different are we from Russia?”

Kulyk says growing up in the Soviet Union, he didn't question the dominance of Russian.

"For some time, I was polite in a way most Soviet Ukrainian people were, so when spoken to in Russian, I switched to Russian,” he says. “Then, I decided no way,"

He remembers the exact moment. It was in l987, four years before Ukraine won its independence from the collapsing Soviet Union. Kulyk was at a play with some Russian-speaking friends. It was intermission. "I said, ‘Sorry guys, that's enough. I have to reclaim my language.’"

Reclamation of its native language was a cornerstone of Ukraine's drive for statehood. One of the very first things that Ukrainian nationalists did was declare Ukrainian the sole official state language. That declaration was partly symbolic; Russian speakers kept speaking Russian, and it's still widely considered the more prestigious language. Many Russians view Ukrainian as a peasant language.

But that's changing, because Ukrainian is now the language of education. Eighty percent of the nation's schools, including universities, now use Ukrainian as the primary language.

“A lot of musicians I've talked to from Eastern and Western Ukraine, might have grown up speaking Russian, or still speak Russian with their friends, but feel driven to make their music in Ukrainian,” she says.

A case in point: Papa Karlo, a popular rock group from mostly Russian-speaking eastern Ukraine. Their songs are in Ukrainian. Bilaniuk says this is part of a Ukrainian cultural resurgence, led by young musicians and writers.

“They're building something new,” she says. “This is a once-in-a-lifetime chance to create this country, with its complicated history.”

At the same time, Russian isn't going away. Even Ukrainian language champions like Volodymyr Kulyk don't expect it to, or even want it to. The fact is Russian is useful. In this part of the world, it's the language of business. And science. And cursing.

Some native Russian speakers think their mother tongue deserves recognition as the country's second official language. Others, like Marina Yakobovskaya, who teaches Russian at a university in Kiev, believe that Ukrainians should continue to learn and embrace both languages.

“Our President was right, saying that language is the heart of a nation,” says Yakobovskaya. “But our nation is two-hearted, Russian and Ukrainian.”

As for me, I tried to learn Ukrainian before I got here. But it didn't get me very far, because even if I could make myself understood, people in Kiev answered back in Russian. So now, I'm studying Russian. I'm looking forward to learning some of those swear words that both Russian and Ukrainians use.