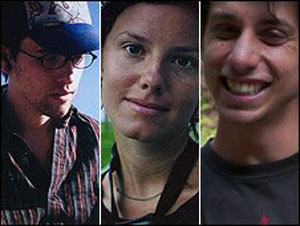 Shane Bauer, 27, Sarah Shourd, 31, and Josh Fattal, 27, have been held in Iran since July of this year. The trio is thought to have crossed a poorly marked border by mistake while hiking in Iraq’s Kurdish region.

Borzou Daragahi, the Middle East correspondent for "The Los Angeles Times," says the basis for the espionage charges were not specified by the Tehran prosecutor.

"Typically, in certain cases in the past, people who have been in this situation in Iran, being held inside Iran's detention centers, have been pressured into giving confessions and confessing to being agents whether they are or not. And this might have been what happened. Typically in these circumstances, confessions are what are used as evidence against these folks."

Some have wondered whether Iran views the three Americans as bargaining chips, either for nuclear negotiations or in exchange for Iranian diplomats currently being held by US troops in Iraq.

There are strong suspicions that this is the case, says Daragahi. "For example ... the French researcher who's currently being held in Tehran is being held because France has certain Iranian officials in detention for crimes they allegedly committed in France."

Secretary of State Hillary Clinton appealed for their release.

"We believe strongly that there's no evidence to support any charge whatsoever," said Secretary Clinton earlier today in Berlin. "And we would renew our request on behalf of these three young people and their families that the Iranian government exercise compassion, and release them so they can return home."

Daragahi, believes the three detainees could be caught in the middle of internal Iranian domestic politics.

"Right now, the Iranians and Americans are in the midst of possible breakthroughs in negotiations over Iran's nuclear program," said Daragahi.  "There are many factions in Iran, and it's very conceivable that one section either doesn't want Iran to have any kind of diplomatic outreach towards the US, or doesn't want the other faction to get credit for making that diplomatic outreach, and is seeking ways to sabotage those diplomatic attempts."