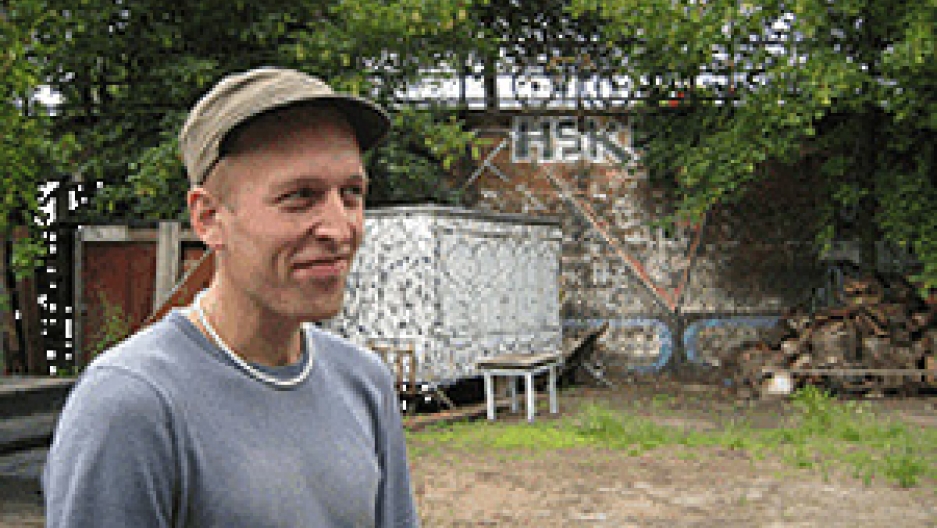 Twenty years ago this week the Berlin wall was coming down, reuniting Eastern and Western Germans after almost 30 years. German Chancellor Angela Merkel marked the anniversary with a speech to the U.S. Congress. Merkel urged action to make a climate change agreement at Copenhagen possible. She called inaction another wall that must be brought down.

Today, parts of the former no man's land along the iron curtain have come back to life in unexpected ways. In one community, nestled into the former militarized zone of the Berlin Wall, people are redefining sustainable urban living.

If you walk the former path of the Berlin Wall south from the Brandenburg Gate, you'll come across a gravel footpath on the banks of the Landwehr canal.

"I think squatting always has been, the aspect of taking care of the place and not just going in there and say okay, we'll be here for a bit until the roof comes down and then we'll squat something else," said Piers Ewing, a resident.

Ewing stands near a large dome-shaped structure made of plywood and particleboard. "It used to be a greenhouse in its former life and was built into a multi-use sort of stage and café building. So we are one of the few trailer parks that actually do things all year through."

By "doing things", Piers means the public music, theater and education projects that take place on the old greenhouse-turned stage behind him. This community is more than a residential trailer park.

Since 1991 the squatters of Lohmule have worked to bring this dead strip along the Berlin Wall back to life. The city of Berlin has granted the squatters a permit to stay here because they are improving the landscape while educating the public about low-impact living.

Ewing lives here with 18 other people. They work as artists, teachers, shopkeepers, bike messengers and even clowns. Everyone uses an outhouse, where they rely on microorganisms to reduce the smell and help break down the waste.

The squatters carry water in buckets from the nearby canal to water their vegetable garden, which is tucked in amongst the 15 or so trailers out behind the stage area. Ewing has installed solar panels on most of the trailers, making Lohmule almost completely energy independent. They power the stage and café area with a generator but there are plans to get a windmill installed soon.

"This space used to be totally barren sand with weed killers, and now nature has reclaimed this space and what their experiment is is to cooperate with nature," said Anna Grichting, an architect who has been studying planning and sustainable development in Berlin since the Wall came down.

Grichting studies boundary areas all over the world, focusing mainly on the demilitarized zone in Korea, the Green Line in Cyprus and the Berlin Wall.

She sees this community as a prime example of how people repurpose the no man's lands created by international conflict. "It's interesting because it's a laboratory of ecological planning in these in between spaces. And I think it's not only from the nature but also these new communities or new ways of living that emerge from these spaces."

Piers Ewing doesn't see himself as a lab rat, or even an ecological planner. But he agrees that without the Berlin Wall, there could never have been a place like Lohmuhle. In the chaos that followed the Wall coming down, the government didn't have the resources to squelch the creative energy that spawned this community.

"With the fall of the Wall there was so much space and even if they didn't like it, they just couldn't keep up with like getting everything paved and building fancy new places," said Ewing. "It just couldn't keep up so it was pretty easy to get things going and get a long-term perspective. Yeah it's getting harder, but it's still Berlin and it's not London or Paris or someplace like this."

For Ewing, Lohmuhle is a patch of wildness in the urban environment, but it also represents a unique opportunity to live life a little bit on the wild side, outside of the rat race. He studied physics in college, but for now Piers is happy teaching drums in the local community, and working on his own musical projects.

"If I put it on a financial scale, but I don't want to, I would be better off working a bit more and moving into a flat. I would have more time or more money in the end, but if I work on the project, I decide what I do, and not my boss."

Ewing's too young to really remember what life was like when his country was divided by the Wall and the Cold War, but whether he understands it or not, he's part of the healing process for the city of Berlin. Among all the grand public buildings that have sprung up where the wall once split the city, Lohmuhle represents an alternative approach to rebuilding after troubled times, and a new take on modern urban life.