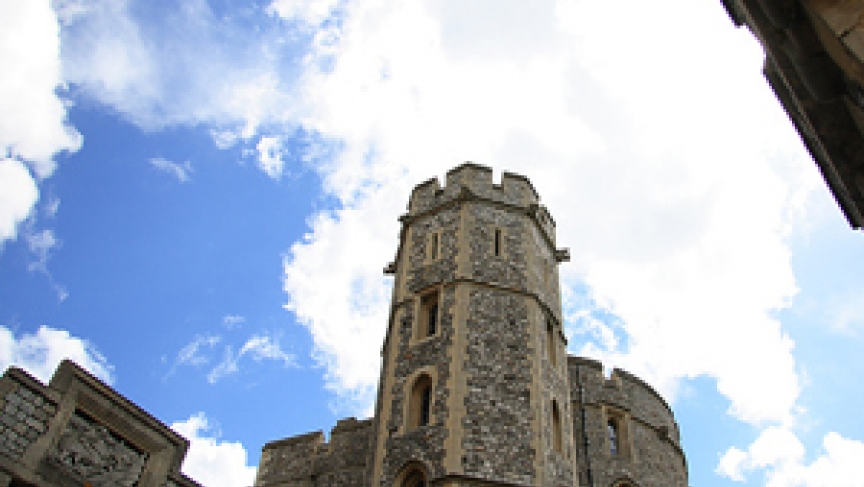 Sikh musicians welcomed a group of religious leaders from around the world this week. The priests, rabbis, imams, and others gathered at Windsor Castle in England. They met to collaborate on an issue that the world's governments are having a hard time agreeing on: Climate change. The conference came just weeks before a global summit on climate change in Copenhagen.

It's not every day that you see an army of black, white, red, and orange robes processing up the cobbled hill to Windsor Castle. But these religious men, and women, are on their way to lunch with Prince Phillip, the Queen's husband, and the UN Secretary General Ban Ki Moon both of whom have thrown their weight behind religious efforts to tackle climate change.

Ban addressed the assembled: "Together the major faith groups have established, run, or contributed to over half of all schools worldwide. You are the third largest category of investors in the world. Your potential impact is enormous."

That's why the UN is helping to fund an array of plans developed by members of nine world religions -- from Muslims and Christians to Bahais and Sikhs. The organizers at Windsor say that between them the religions represented here claim more than 85 percent of the world's population. That's convinced long time secular environmentalists that they're vital allies.
Patrick Holden is a leader in the organic food movement. He thinks there is great potential to drive change.

"I think the power of four billion people, if it is that, ought to drive change especially because faith communities think long term. They have fantastic communication networks and they’ve got resources. Should not be underestimated."

The meeting marks a significant evolution in the relationship between many religious traditions and environmentalism.

Martin Palmer is head of the Alliance of Religions and Conservation. He believes the barriers are finally coming down around religion's relationship with nature.

"I think the real problem for Christianity, and to some extent for Judaism and Islam as well, was fear of paganism. They saw respect for nature as being tantamount to worship of nature. And all sorts of deep barrier to theological traps kind of went bing, bing, bing when the environmental movement came into being."

Palmer adds that many American Evangelicals were resistant because they saw environmental destruction as a necessary prelude to the end times when Christ would return.

But the presence here at Windsor of many Evangelicals, including a choir from the Baltimore New Psalmist Baptist Church, reflects a significant conversion. Many have been moved to look again at their bibles and encouraged to see that respect for nature doesn't mean worship of it.

Creation care has become a new buzz term. Perhaps the most ambitious initiative announced here was the Muslim seven-year action plan. Sheikh Ali Goma'a, the influential Grand Mufti of Egypt, spoke of protecting the earth as a religious duty. The plan calls for the construction of so-called green mosques and even cities as well as a TV channel for Islam and the environment. Goma'a also announced the greening of pilgrimage cities including Medina in Saudi Arabia.

"First they will increase the green area," said Goma'a through a translator. "Second they will work very hard to create a natural balance for the carbon. Third replace everything that's being wasted in friendly environmental way."

Millions of Korans will also be published on sustainably-sourced paper.

Meanwhile Jews from America and Israel pledge to try to cut meat consumption among their communities in half by 2015. Livestock production is a major source of greenhouse gases.
And Shintos in Japan and Daoists in China will convert thousands of temples to green energy.

It's an ambitious agenda perhaps. But Martin Palmer says the goals announced here are achievable. Maybe more so than what political leaders are attempting at the UN's climate summit in Copenhagen next month.

Said Palmer, "I've been asked a number of times: do you think the governments of the world will take this seriously? And my answer's been the same every time. I really don't care. Because the religions are going to do this anyway."

And he adds if governments can't come through at Copenhagen religions will just have to show them the way.