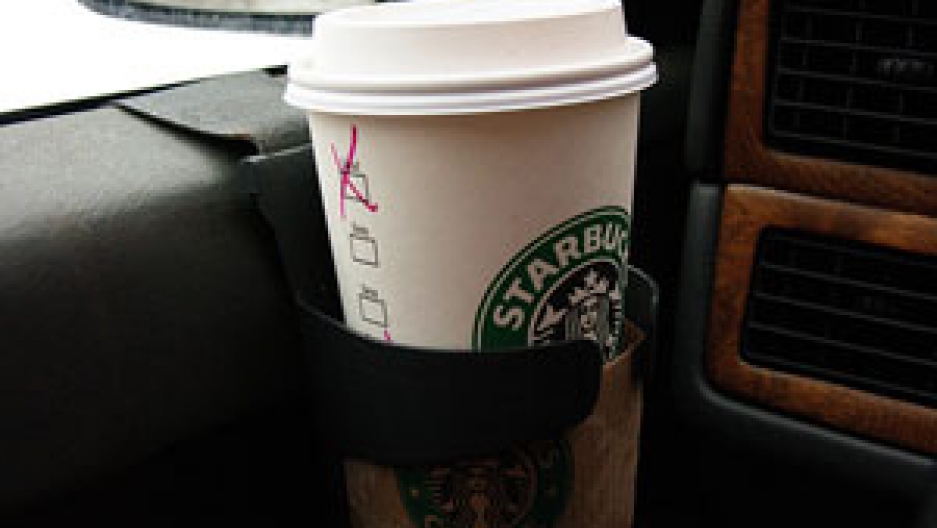 Starbucks may be the ultimate American success story; for people who just want a cup of black coffee, it might be the epitome of American excess. At one point, Starbucks was opening a store every four hours. Over the last year, it’s closed 600 of them.

Temple University professor Bryant Simon sees in that history something more than economics; he sees a parable about America. Simon has visited 425 Starbucks locations in nine countries. Starbucks, he says, was really in the business of selling community, the kind you got in a town square or the old fashioned coffee house, and what we and the company have learned is that community cannot be bought and sold.

"The fundamental thing that Starbucks sold, as it taught us to buy $4 cups of coffee, is it sold a way for us to present ourselves for others to see. With that cup in our hand in 2006 and before, we looked cool, we looked sophisticated, and we also looked like people with $4 to waste on coffee. You can see, in three short years, people aren't seeing the same cultural values. They go increasingly for utility, a place to sit, or the quickest caffeine fix."

In its earlier years, the median income of a Starbucks patron was $81,000. That changed as the company grew, decreasing to $56,000. Simon says that this transition occurred for a very clear reason.

"Starbucks put itself in the way of cultural leaders; the kinds of people that others wanted to emulate:  highly educated, successful in their jobs, moderately hip. It got those people as their early adopters.  Once they had them on board, others who wanted to emulate them would buy the brand so they, too, would seem like these moderately hip, sophisticated, successful people. That's the perfect model for a product that trades on culture."

The company went from 1,800 stores in 1998 to 16,000 in 2008. This level of market penetration and hegemony may have had some unintended consequences for the coffee giant.

"What happened, in some ways, is that the brand consumed itself," said Simon. "It sold things that we wanted. It packaged them and marketed them. What happened was it either didn't fulfill those desires, or a competitor came along and did a better job of it."

Simon states that one of the chief desires that the company sought to fulfill was the desire for a community space.

"What Starbucks identified was a very important shift and a very important need in American society.  Throughout the post-WWII era, Americans moved to the suburbs, they became locked in their cars, for fear they would increasingly live behind gated communities.

"At the same time they were securing themselves, they began to feel as though they were missing something: a kind of community that we often associate with older city neighborhoods. Starbucks understood that desire. From the very beginning, they suggested that their stores, like the old coffee houses, were something called 'third places': a place between work and home where people would gather. Starbucks aggressivly marketed itself as the place where community would be constructed, maintained, and renewed."

This achievement might be viewed as something quintessentially American: A company recognized a need -- the lack of civic spaces -- and they filled that need through the simple solution of making a cup of coffee, and made a profit at the same time. It may be cause for some to celebrate.

"I think there is a way to celebrate the story if what we are celebrating is profitability. What doesn't result from it is the fulfillment of that fundamental need for connection," says Simon.

"If Starbucks tells us again and again from its marketing, or any corporation for that matter, that this is what community is, it makes it harder to find truer versions of it some place else."

Bryant Simon’s new book is "Everything But The Coffee: Learning About America From Starbucks."