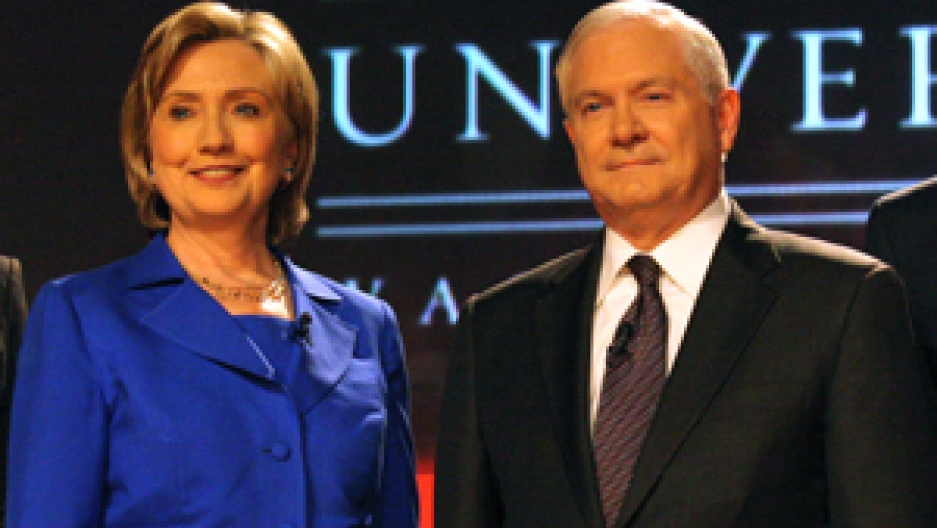 In a recent interview on "American Abroad," US Secretary of State Hillary Rodham Clinton and US Secretary of Defense Robert Gates spoke about US policy around Iran's nuclear program.

In late September, Iran revealed that it had covertly built a second uranium enrichment plant. Since then, the US, Iran, the UK and other countries have met in Geneva to try to come to agreement around Iran's nuclear program.

According to Secretary Clinton, there were three agreements reached in these talks. In addition to inspections of the undisclosed sites that would take place promptly, Secretary Clinton said Iran also agreed to, "ship out their LEU (low-enriched uranium) for reprocessing to be returned for their research reactor," and agreed to another meeting with the US and other countries.

She added that there is more to be done. "So we think that, on those three big issues, this was a worthwhile meeting. But as the president has said, and I and others have also made clear, this is not by any means a stopping point. There is much more to be done. We expect much more.

"We know that the Iranians need to understand that they have run a nuclear program that has violated international rules and Security Council resolutions, which they have to bring into compliance, making it more transparent and accountable. So we have work ahead of us, but I think that, on balance, what came out of the meeting in Geneva was positive."

Recently, an Iranian diplomat told the press that there wasn't an agreement for Iran to ship out its LEU. Secretary Clinton says while the agreements have been made in principle, they still need to be carried out.

Secretary of Defense Gates thinks the jury's still out on whether Iran will keep its end of the bargain. "And what we have to do is keep them to tighten up deadlines and specific enough requirements that we have some indication of whether they're serious or not."

But critics have asserted that the recent agreements are another way for Iran to play for time, and believe that in effect, Iran is being rewarded for having flouted U.N. resolutions, in being allowed to take uranium -- that they shouldn't have enriched to begin with -- and get it sent out and brought back, enhanced, to be able to use in a power plant.

Secretary Clinton agrees to a certain point. "The uranium that they have enriched would be used for a research reactor, which everybody knows they've been running, which they are entitled to run, but it would not be used for other purposes.

"So, yes, does it buy time? It buys time. It buys time for us to consider carefully their response, the sincerity of their actions, and, you know, we're moving simultaneously on the dual track. I mean, we always said we had a track of engagement, and we have begun that with this process, but we also said we would be working with likeminded nations and convincing others to stand ready with tougher sanctions were we not successful."

Secretary Gates believes Iran has always had the intention of developing nuclear weapons. "But I think, you know, the question is, can we over time or can we in a limited period of time bring the Iranians to a conclusion that Iran is better off without nuclear weapons than with them; and not just in the security sense, but economically and in terms of their isolation in the international community, and so on.

"And because -- I mean, my view is, the only long-term solution to this problem, at the end of the day, is the Iranians themselves deciding having nuclear weapons is not in their interest. And if we can't convince them of that, then an array of other options are open.

"But our hope, my hope for ever since I took this job has been that -- that we could, through both carrots and sticks, persuade them of a smarter direction for Iran."

Secretary Clinton agrees and says the objective for the US and its allies is to persuade Iran that developing nuclear weapons is not in their best security and economic interest.

"You know, we just worked through this missile defense decision, and you know, clearly, our new adaptive approach toward missile defense is aimed at protecting our NATO allies and most of Europe from a short- or medium-range Iranian missile.

"We have begun to talk with a lot of our other friends and allies about what they need to feel that they would be adequately protected.

"Now, this is not in any way to concede what Iran should do going forward, because some people say when we talk defensive that means that we're conceding that they are going to end up with a weapon.

"No, not at all. We are trying to influence the calculation and the decision as to whether or not they should move toward weaponization."