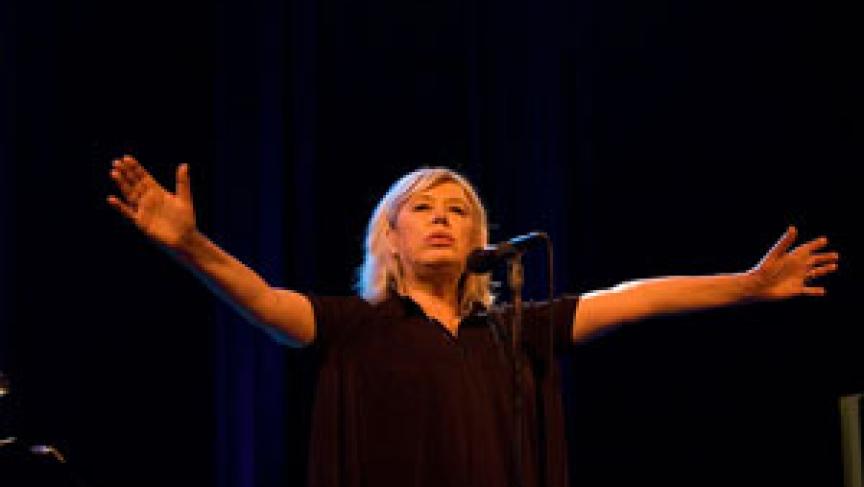 Story by Marco Werman, "The World"

Singer Marianne Faithfull has been called the first rock chick, a 1960s icon, and an honorary Rolling Stone. Faithfull's career has also been grist for the British tabloid mill. She dated Mick Jagger, overdosed on drugs, made a comeback, and she has beat breast cancer. Now she has a new album out of other people's songs, and she is in the middle of a brief tour in the U.S.

Given her eclectic musical past, one might be curious as to what is on her iPod.

"Lots and lots of things," said Faithfull. "A lot of classical music. I love Mozart and Monteverdi, and opera. I particularly love opera. And then, a lot of country music. And lots of jazz. I really like to listen to jazz when I am not working."

On her new recording, "Easy Come, Easy Go," a covers album, she does standards; if you can call "Sing Me Back Home" by Merle Haggard a standard. And, she covers "Solitude" by Duke Ellington.

"I love his music. I love 'One O'Clock Jump,' particularly. But, the way I know 'Solitude' is through Billie Holiday. Occasionally I attempt to do a song I've heard from Billie Holiday. It's quite daunting of course, but I think it worked out quite well."

"I love all of the early jazz, the New Orleans jazz. I love Jelly Roll Morton, and I love Miles Davis and Charlie Parker; Coltrane best, I think. 'My Favorite Things' -- I love that whole record. 'My Favorite Things' is just a wonderful soundtrack to lots and lots of different parts of my life. It is so cool. I guess I like it as a refuge from very emotional stuff. It is emotional, but different."

On Faithfull's iPod, we spin from Coltrane to Claudio Monteverdi, and one of the world's earliest operas, 'L'Orfeo.'

"I always love the story of Orfeo, which is the story of Orpheus and Euridice. It is a very, very potent story for any musician. I love it and I play it a lot. It's highly dramatic and very beautiful musically. It is the life story of many musicians. They nearly get to life and then they go back again."

Drop a letter down to "B" for Blur. Faithfull doesn't cover any tunes by the band's frontman Damon Albarn on her new album, but they do have a close musical collaboration.

"I really like Blur, and I really like (the song) 'Tender.'  I like (Damon Albarn) very much, he has been very generous to me by letting me use these great songs. Lots of love, Damon."