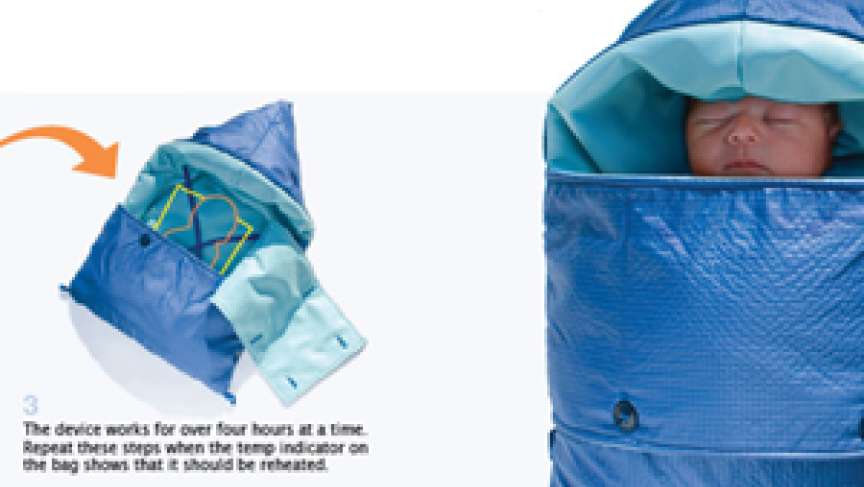 Story by Clark Boyd, "The World"

Twenty million low-birth-weight babies are born around the world each year; 80 percent of those births occur in rural areas in developing countries; 3.5 million of those babies die and the ones that survive often have to live with lifelong health problems.

The key to keeping these babies alive and healthy is a stable, warm environment; however, high-end incubators in the developing world tend to only be in urban centers, due in part to their cost, which can go as high as $20,000.

This is where the creators of the Embrace hope to help.

The Embrace is a low-cost incubator made from phase change materials. The idea is to create a kind of sleeping bag for a low-birth-weight or premature baby. The bag is designed to hold a constant, warm temperature for four hour stretches, which can greatly improve the chances for the baby's survival.

Linus Liang is one of the co-founders of Embrace. He says the idea for the Embrace came out of a class he did while in school at Stanford. He was sent to Nepal to do research on neonatal mortality.

"When I went to Nepal I went to a lot of hospitals; I talked a lot of doctors; talked to a lot of nurses. And this is all in the major cities, in urban settings ... I saw a lot of these actual incubators. They had pretty nice ones -- these are the traditional $20,000 incubators that you see in US hospitals.

"I looked at the incubators and I said, 'why aren't there babies in there?' And the doctor said, 'well, the main problem is the babies actually coming to the hospitals.' And that was sort of an 'a-ha' moment and I decided that I should go into the rural areas where access is not so good and transportation is harder, and that's where a lot of the problems lay."

In the rural areas, Liang observed a variety of incubator substitutes. "They do varying methods ... borne out of desperation. They warm blankets in ovens, and then they placed the blankets on top of the babies, or there'll be light bulbs ...".

According to Liang, the methods failed to provide the babies with a constant temperature, which is critical to their survival.

He returned from Nepal and, with his team began to think about what they could develop within the resource constraints of the rural areas: something that didn't require electricity, was portable, easy to use, low-cost and durable.

They found a solution in an "old technology" developed at MIT: phase change materials used to incubate vaccines.

Phase change material, said Liang, "is basically a material that has a high fusion of heat that is stored underneath, and as it changes phases, it slowly releases it. So what it allows us to do is keep this constant temperature as it changes phases for a long period of time."

The Embrace is a sleeping bag with a heating unit, which is heated when hot water is poured into it. The unit goes into a phase change pouch which is then placed with the baby into the sleeping bag.

"It will last for four hours," said Liang. "So that gives enough time for a rural mother to transport her baby to an urban area to one of the big $20,000 incubators."

The Embrace is designed to be reusable to further lower its cost, which Liang says is currently around $25.

While Liang realizes there is a commercial model for his product, he says his organization will remain a nonprofit: "We stay to a nonprofit model because we really want to realize our social mission, which is to give every baby a chance for life."