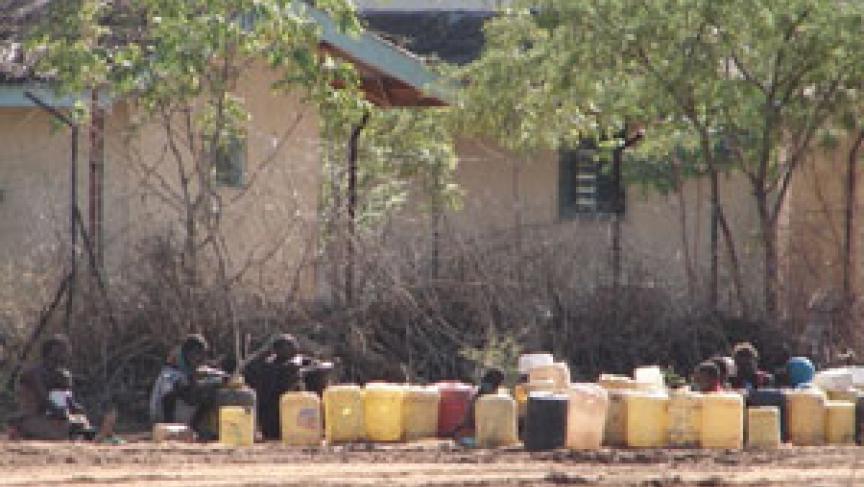 A part of the world once synonymous with drought and starvation is facing another food crisis.  Twenty-five years ago images of malnourished children in Ethiopia focused the world’s attention and sympathies on East Africa.  Today, a lack of rain as well as political violence again threatened the region with starvation.

Nicholas Wasunna is a humanitarian advisor for the aid group, World Vision.  He and his colleagues witnessed the effects of the drought as soon as they began their mission. Wasunna just visited Northern Kenya where he and his colleagues saw some wrenching sights.

"We saw an elderly lady just faint," said Wasunna. "She just passed out.  Her thin body, frail hands.  I remember going to where she was just to hold her hand, and I looked in her eyes which were half shut. And I remember thinking to myself: does it really have to come this? What can we all do to ensure that in our day and age we do not see these kinds of things?

"Already we could see the carcasses of cows, donkeys, goats and I was shocked when I saw the carcasses of camels as well, but this does show you the severity of this drought.  These communities they really rely on their livestock."

Several things have brought Northern Kenya to its current situation.  Political unrest, the ethnic conflict and the post-election violence; plus poor rainfall for the last two years have also contributed.

Also, said Wasunna, "the infrastructure is just so poor.  These are areas that have never been prioritized in terms of infrastructural development.  Getting there by road could take two or three days.

"A pastoralist community in Northern Kenya who are looking for a market for the livestock -- it would take a businessman three days in a lorry to get to Northern Kenya.  By the time he gets there, the quality of the livestock, the body condition is poor so the price will be poor.  A meager sum that can hardly buy cereal for the food."

There is some suspicion that rains will arrive in October, but a big rain at the end of the growing season may be too late.

"Some areas are flood prone and we are already preparing to respond to communities where there might be flooding episodes, but normally in places like Turkana in the north, we see that the rain really helps the grass to grow so the animals can start to graze again, but the future trends are there will be more droughts, there will be more episodes of flooding.

"We’re expecting and El Nino to be coming from October.  Then we’ll go back to a series of droughts again.  So this will become what we’re calling the new norm," says Wasunna.