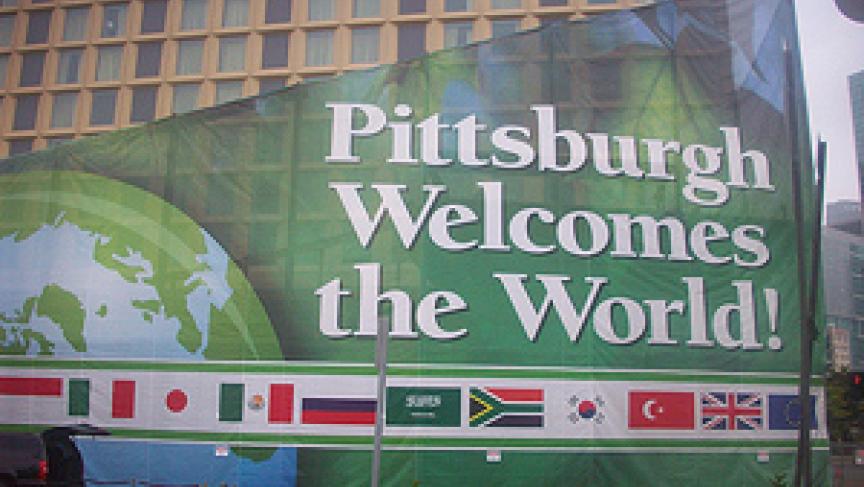 Story by Jason Margolis, "The World"

The G20 Summit gives leaders of the world's 20 biggest economies a chance to focus on the global economy. For people and businesses in Pittsburgh, it's their moment in the international spotlight.

It's rare that cities get a chance like this: 20 of the most powerful leaders in the world in one place, at one time, along with hundreds of support staff, and thousands of reporters and camera people.

It's a fleeting chance for local businesses to press as much flesh as is humanly possible.

That was the idea behind the trade expo organized by Pennsylvania state representative Jake Wheatley. It was held in Pennsylvania’s Hill District, about a mile and a half from the Convention Center where the G20 summit was taking place. Wheatley's assistant Chuck Tyler ran the show.

"Major events of this magnitude are the Super Bowl champions, the Stanley Cup champions. But no, there's definitely a buzz throughout Pittsburgh," said Tyler.

The building where the Trade Expo was held is a community center. It normally hosts after school programs for children, daycare, and services for seniors. Expo organizers rolled out the red carpet -- a spread of chicken kabobs, meatballs, and cups of macaroni and cheese. Thirty minutes into the two-hour event, nobody had touched the buffet.

Tyler kept glancing towards the entrance. "Worst case scenario would definitely be if we all just sat around and ate some great food and chit-chatted among ourselves. The average outcome would be more folks like yourself coming in here and talking to the exhibitors and getting their stories out that way. Optimum outcome would be a G20 country rep coming in, actually engaging with a business and saying, 'You know what, I need to take notes, I need to take your card, your company should be able to do business with my country.'"

Bud Lateef laid out his merchandise on a table. His small company is called Lockmed Medical Products.

"We are a company focused on medication security products. We have medication containers that are lockable," said Lateef.

Rina Liu-Balshe strolled over. She manages the International Trade Program with the Southwestern Pennsylvania Commission. Her job is to help people like Lateef grow their businesses.

She thinks the lack of visitors at the expo was disheartening. "The reason I think, with all the security, all the things, probably logistically, make the organizing a little more difficult. Because if you're not from Pittsburgh it's pretty difficult."

Nobody at the Expo was expecting Angela Merkel or Nicolas Sarkozy to personally walk through the doors. But the lack of any foreign visitors couldn't help but breed some cynicism that big international conferences like the G20 take place in hermetically-sealed convention centers.

One woman from a local chamber of commerce, who asked not to be identified by name, said she wasn't surprised nobody came.

She asked: "What would you do if you were a foreign visitor with a couple of days in Pittsburgh? Go to a party thrown by the Brazilians or a trade expo in the poor part of town?"

After a full two hours of the Expo, nobody showed up.

Tyler's reaction: "I'm going to use President Obama's grading scale. This was an A-minus. We engaged small and medium enterprises. We allowed them to network. And we had great folks ... so we did generate some type of external attraction to our events. And so, A minus."

Local businessman Fred Neumeyer said as he was packing up his display, "Ahh, there's always tomorrow!"