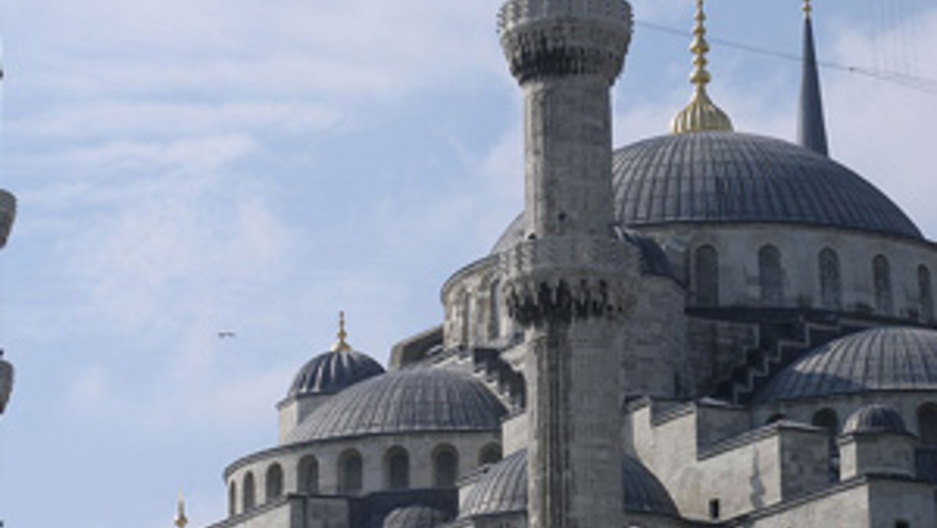 Story by Aaron Schachter, "The World"

Charles Darwin’s theory on the evolution of species has lots of critics among creationists here in the US, but now a creationist in Turkey is getting a lot of attention.  Adnaan Akhtar is his name, although he’s better known by his pen name of Harun Yahye. He’s on a mission to defend Islam against what he regards as an attack from the godless West.

And his followers are on a mission to convince others around the globe to join their cause: "Hello everybody, my name is Oktar Babuna, I’m a medical doctor, brain surgeon from Turkey."

Oktar Babuna is a man of science, but he’s also a missionary of sorts. He travels the globe on behalf of the world’s leading Muslim creationist to urge people of The Book.

At an interfaith conference in Tel Aviv, he urges delegates to unite against Charles Darwin and materialism. "These two ir-religious philosophies, Darwinism and materialism, are the foundation of the conflict and corruption going on in the world. Because we all believe -- Christians, Jews and Muslims -- that God has created the entire universe out of nothing and that he dominates all that exists with his omnipotence."

Babuna’s lecture against Darwin took many by surprise, as they were expecting to hear one against terrorism. But for Babuna, and especially for his boss, Harun Yahya, evolution is up there with such evils.

Harun Yahya gets set for yet another TV interview as part of his mission, he contends, to defend the Abrahamic religions against Darwin. A controversial figure in his native Turkey, he’s built a large following throughout the Muslim world, and stepped into a virtual void when it comes to debate in Islam over evolution.

Yahya runs websites, holds seminars, and has written, with some amount of help, over 300 books. His latest, "The Atlas of Creation," is a 12-pound, 800-page refutation of Darwin. He delivered it unsolicited to schools and research institutes around the world.

In it he agrees with scientists that the earth is hundreds of millions of years old; the Koran's account of creation is ambiguous on the length of the six days. But he argues that God formed the world whole, and he denounces supporters of evolution as pagans and crackpots.

"I’m a believer in science," said Yahya [translated]. "If I had ever found any hard evidence for evolution, in the Koran or in the world, I would accept it. There are millions of fossils, but none of them ever show creatures evolving. Darwinism is nonsense, and dangerous. Despots like Stalin and Hitler used Darwin to justify murdering millions."

Salman Hameed is an assistant professor at Hampshire College in Massachusetts who teaches a course called History and Philosophy of Science & Religion. He has his own thoughts about Yahya.

"Let me be very clear: He presents a very crude form of creationism. Most of it is borrowed from Christian creationists, or the fundamentalists here in the US. These are not sophisticated ideas. However, he connects evolution with atheism, and he presents himself as standing up to the West. So the popularity of his views against evolution has really nothing to do with the science."

In other words, it's an ideological battle. And evolutionary biologists like Richard Dawkins, who so publicly links his science with his atheism, indirectly help Yahya’s cause.  In fact, surveys suggest a large majority of Muslims reject evolution.

Hameed laments that there is yet to be serious debate about evolution's compatibility with Islam, and notes that while it's taught in schools in Turkey and Pakistan, it's often within a religious context. Still there are stirrings of debate among scholars.

Suleiman Attash once ran Turkey's Religious Affairs ministry, and taught religion for nearly a decade in Saudi Arabia. He turns to a passage in his well-worn Koran that he says supports the evolution of species: "Proclaim, in the name of the lord, who created man out of leech-like clot. The lord is most bountiful."

Attash interprets leech-like clot to mean embryo. He says this proves God created embryos of plants and animals, but he believes God made each to evolve distinctly within its own species.

"Honestly I can’t understand why those who call themselves religious authorities deny evolution," Ozturk said [in Turkish]. "There's no contradiction. Evolution as described by Darwin reconfirms the existence of God. Who but God could design such a system?"

Religious scholars like Ozturk point to the work of a Persian philosopher, Ibn Miskaveyh, who wrote a thousand years ago about the evolution of matter, first created by God.

Recent controversy, however, suggests the Islamically-oriented government in Turkey may be less sympathetic. Earlier this year, its science council fired the editor of its science magazine, allegedly for trying to run an article about Darwin. When asked whether she thought her firing was a ham-fisted attempt at censorship, the editor said only that she'd never had her worked questioned before and it was up to the public to decide why she was fired.