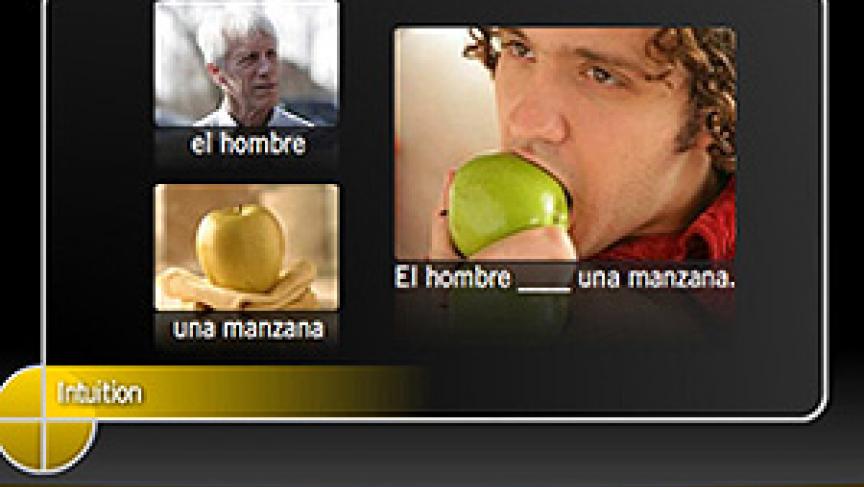 These are tough economic times and a lot of companies are struggling to cope. But there's one business that's doing quite well: Rosetta Stone, the makers of language-learning software. They offer a very old product but it’s delivered in a very modern way.

In a tutorial, Rosetta Stone's software program teaching Spanish starts by introducing some simple vocabulary. Colorful photos pop up on the screen and users are supposed to match the picture with the spoken word. The program also has users repeat words into a microphone to practice pronunciation. In a matter of minutes users are stringing together very basic sentences.

Instead, said Rosetta Stone’s director of learning Duane Sider, the software uses an immersion technique that tries to mimic the way we acquire language as children, "Being completely surrounded by the language that you are learning -- and for an adult it means not using your first language or languages to supply the meaning -- but rather in the way that you learned your first language, to use the context, the context of images and the context of the world around you."

This learning philosophy is catching on. Rosetta Stone's sales are booming. The company recently reported an 18 percent jump in quarterly revenues from last year. Business was going so well that despite the worst recession in two generations the company went public in April.

"We were feeling good about the business and so we said okay let's go," said Rosetta Stone's CEO, Tom Adams. "We've added an office in London, one in Tokyo. This year we're adding an office in Germany and one in Korea."

There's a simple reason why Rosetta Stone is bucking the economy, according to investment banker Ed Meehan with Arcady Bay Partners: The education business thrives during times of recession.

"You have more people saying, 'gee things aren't going well maybe I should become a nurse, maybe I should get my four-year degree in accounting, maybe I want to learn a trade'," he explained.

And this also applies to learning a new language.

Besides selling to individuals Rosetta Stone also contracts with some 10,000 schools, the US government, and the army. Those contracts are about as recession proof as you can get. Analysts say effective marketing got Rosetta Stone to this point surpassing long-time US market leader Berlitz.

Georgetown linguistics professor Alison Mackey says you can hardly walk through a suburban mall these days without being accosted by a Rosetta Stone representative, "The marketing is very slick and the product is very nicely designed."

But she can't say if the product is better than others in the market, "So far controlled experimental studies which have pre-tests and post-tests have not been done. So we don't know yet too much about the actual claims for learning."

Mackey says the best way to learn a new language is the same as it's always been: go live in a place where that language is spoken. If you can supplement that with classroom learning, all the better. For those who can't afford to move to a new country there have never been so many new ways to learn a language. For example there are countless language podcasts -- many available for free.

And despite her concerns for Rosetta Stone, Mackey isn't dismissing the product, "I'm not saying don't use it altogether; I'm saying if you really wanted to learn Russian take a class, get a textbook, listen to some iPod broadcasts from people who are teaching Russian, look at some vocab lists, and use the Rosetta Stone. The Rosetta Stone is one of a number of important tools in the learner’s tool box."

So when Rosetta Stone CEO Tom Adams says his product is, "changing the way people learn languages," it may be a bit of a stretch.

But if sales are anything to go by, Rosetta Stone has got a lot of people excited about language learning and maybe even practicing their new skills. For those who do plunk down a few hundred dollars for the Rosetta Stone software, it may be a bit like joining a gym -- once you've made the down payment you become more committed to getting in shape and getting your money's worth, perhaps.