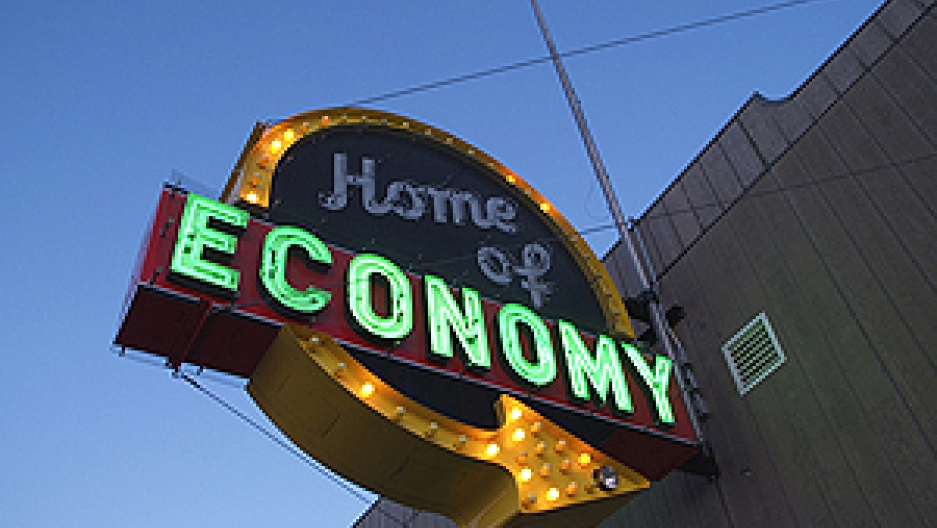 Recent reports indicate that Japan has pulled out of recession. That follows news that Germany and France have returned to economic growth.

The United States hasn't quite reached that stage but some states have fared better than others. Take North Dakota for instance. Its banks did not get caught up in the subprime mess and it has the lowest unemployment rate in the country. Things were tough last year though. Commodity prices plunged and left North Dakota farmers holding the feed bag.

"The World's" Jason Margolis filed this report about how some farmers and agriculture businesses in North Dakota are now trying to position themselves to be less vulnerable to future swings of the global economy.

To an outsider the town of Carrington, North Dakota seems like a bit of a throwback. There are no chain stores here only mom-and-pop stores and restaurants. A two-story Plexiglas statue of a Native American dominates the downtown skyline as it has for decades and there are wheat fields for as far as the eye can see. But on the Gussias family farm life is quite different for the man now in charge: Roger Gussias.

"My grandparents and my parents -- their markets were the local elevators ... we try to do business overseas, so our markets are in Poland, South Africa, Canada, China, Spain," said Gussias.

Gussias grows wheat and barley like his parents but unlike them he actually travels the world to find new buyers for his crops especially niche products like organic porridge and flaxseed.

For farmers in North Dakota these days selling crops overseas is crucial to running a business. Gussias is relatively new to the export game but he's learning the ropes quickly. He attended a business seminar called ExporTech, a three-day crash course put on by local, state, and federal trade agencies.

In a small classroom, a group of North Dakota farmers and farm equipment manufacturers are picking up tips on how to find new buyers overseas. Heather Ranck helped put on the seminar. She's an international trade specialist with the US Department of Commerce.

She says most of the conference attendees are already experienced exporters, "But I think that they wanted to become more strategic about their approach."

That's because they got burned recently. North Dakota exports had been doing great in the last few years. Commodity prices were through the roof. And it wasn't just farmers doing well. Farm equipment manufacturers tapped into new markets.

"Russia, Ukraine, and Kazakhstan where the agricultural practices and the climate and the soil, in many areas, are very similar to here. So they can use the exact same production practices that farmers use here and the same equipment," said Ranck.

Those markets opened because farmers in those countries could afford to buy American equipment. Credit from western European banks was cheap. But last year farms in the former Soviet Union were smacked down by the credit crisis. Farmers there simply couldn't get loans. And North Dakotans couldn't sell their products.

Casey Bryl, the chief agronomist at Amity Technology in Fargo, said things had changed drastically in Russia at that time, "We started to experience some cancelled orders coming in. We had some sales forecasts from some of our dealers overseas to almost selling nothing at all."

Amity Technology builds sugar beet harvesters and air seeding equipment. The company didn't suffer on its own. North Dakota exports fell off a cliff down 28 percent earlier this year. To be fair exports fell in all 50 states except one -- Mississippi. So what do you do when your buyers can no longer afford your products? You look for new buyers. That's what Amity Technology is trying to do.

"We're currently targeting the market in Turkey, Egypt, and on the outside of the radar is India," said Bryl.

Other North Dakota companies are also looking to new business frontiers in places like Angola and Mozambique. But machines like sugar beet harvesters aren't cheap. Many farms in India and Mozambique can't afford them. So what to do? That's where Heather Ranck at the Commerce Department comes in.

"Just to compete you need to bring financing tools to the table or you will not have as good of an offer because financing is as much of the package that people are interested in as the equipment itself," said Ranck. "If you look at competition, the Europeans for instance they have often used export credit tools. And they're much more used to using them. It just hasn't been as much a part of our culture in the US as it is in Europe where you kind of have to trade with your neighboring nations to do any kind of significant business."

Back in Carrington it's bull riding competition day. Some of the farmers might look rather unsophisticated dressed as rodeo clowns trying to distract the bulls but there's not much that's unsophisticated about modern farming. Roger Gussias brims with excitement about his upcoming trip to Poland where he'll tell perspective buyers that flaxseed is really good for you.

So despite the recession Gussias is optimistic about his business. Like many farmers in the state he's become more savvy and confident about negotiating the minefield of the global economy. But they're all quick to remind me that swings in commodity prices and the dollar are not their biggest concerns. As always their worried about what Mother Nature will throw their way next season.