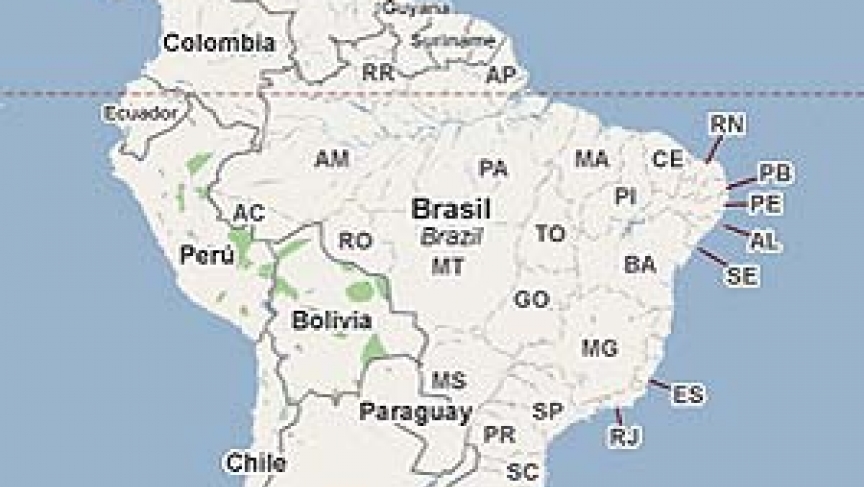 If you want to move a ship's cargo from the Atlantic Ocean to the Pacific or vice versa, the Panama Canal still has few rivals in the business. But that hasn't stopped ambitious entrepreneurs from dreaming up alternatives over the years. The latest scheme is to create a route across South America, along a chain of ports and highways, and river ways. Supporters say the plan could spur trade between Brazil and Asia. Critics say it’s a foolish idea.

"The World" reporter Melaina Spitzer filed this story from the Pacific port city of Manta in Ecuador.

On the docks of Manta's harbor, fishermen heave a catch of giant Dorado out of a rustic boat. Manta has long been a fishing port, but down the harbor lies a symbol of the city's future, a huge ship packed with cars from Asia. Manta hopes to become a major hub for Asian imports to South America.

Patricio Padilla is the Manager of Manta's Port Authority. He was at a recent gathering to discuss a bold idea for Manta, to make this harbor a competitor with the Panama Canal.

"Manta is really the nearest port of South America to Asia," said Padilla. "The idea is to have some cargo -- that right now is crossing the Panama Canal and going around South America, and that cargo will go from Manta to Manaus."

Manaus is a Brazilian city almost 1500 miles to the east. It has a major port that's connected to the Atlantic by the Amazon River. The idea to link these cities by land is part of a 70 billion dollar plan for a web of trade routes across South America.

Here's how the Manta-Manaus Project would work: Ships from Asia would dock in Manta and unload their cargo onto trucks. The trucks would carry the cargo up the highway to Quito, over the Andes, and down the other side to the Ecuadorian Amazon. From there, they would go by riverboat, through Peru, to Brazil. A key link in the chain is the Ecuadorian river port town of Coca.

Coca's marina on the Napo river is currently a quiet docking point for canoes and small petroleum boats, but if the Manta-Manaus project goes forward, it will become a major shipping hub.

Carlos Torres is with Coca's Ministry of Agriculture. He says the project could provide a big help to area farmers. He says local farmers would be able to ship their produce to distant markets and reap more of the benefits without middlemen calling the shots. But many in Coca say putting a major trade route through the jungle is just asking for trouble.

Carlos Sierra spent twenty years navigating the Napo River in large petroleum ships. He says cargo boats heading for Brazil may never make it out of Ecuador because the water is too shallow.

"With this type of boat it's really risky. They've hired me many times to rescue international boats, Brazilian and Peruvian boats that had gotten stuck because of water levels," said Torres through a translator.

The engineers of Manta-Manaus are hoping that dredging the river will keep boats from getting stuck. The Ecuadorian government has already bought up land along the Amazonian route and paid contractors to clear forests and farms. But those who make their home along the river say dredging and logging will threaten their communities and the area’s plant and animal life. The Manta-Manaus route runs through or alongside 4 national parks in Ecuador.

Coca's mayor, Anita Rivas, says this shows the government is only interested in one thing, "They’re not thinking about the communities, or the river or the biodiversity in the river.  They’re only thinking about making money for the country. We are tired of being the milking cow while others are being served the milk, and we are always the ones to lose out."

Others are concerned about threats the project poses to human health. Indigenous groups in Ecuador have already seen cancer rates shoot up, including among children. Many scientists blame the contamination of fish and water supplies by oil extraction.

Manuela Ima, President of the Association of Huaorani Women fears that pollution from the Manta-Manaus project will bring similar risks, "For me this means pain of the ugliest sort. It can bring sickness, vomiting, cancer, flu. There are so many problems caused by contamination," said Ima through a translator.

Many indigenous groups intend to fight the trade route, and they say they've got the law on their side. Ecuador's new Constitution protects the rights of nature and requires the government to consult indigenous groups before beginning infrastructure projects that affect their territory. The Manta-Manaus project, many say, violates these rights. Money could also be a problem for the project. It's estimated that the route will cost as much as two billion dollars to build. International lenders have been reluctant to put out money for the project.  And some question if this project could ever really make money. They say this complex system of shipping by truck and riverboat won't be able to compete on cost with the Panama Canal.

Among the skeptics is Manta's mayor, Jorge Zambrano, "Manta-Manaus is not even a project, it's an idea. I can have an idea right now, I wanna construct a big mall, but I don't have the money to do it. It's just an idea, an illusion, a dream."

Still, South America seems ready to dream big, with many infrastructure projects across the continent already underway. Zambrano just hopes that dream doesn't turn out to be a nightmare for Ecuadorians and for the Amazon.