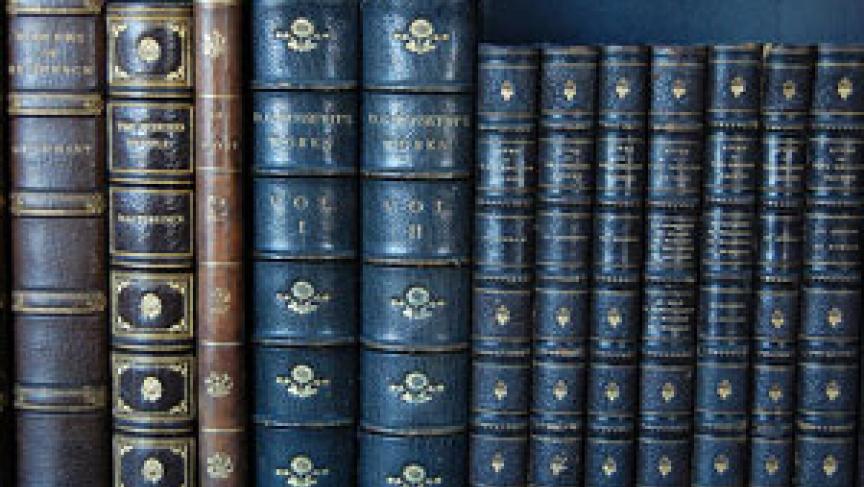 Anybody who’s woken up in the middle of the night could use a good book on the bedside table.  You could choose one from “Dr. Eliot’s Five Foot Shelf”.  That was a list of literature classics compiled by Harvard President Charles Eliot back in 1909.  Eliot claimed that all the books you could need for a solid liberal arts education could fit on a five-foot shelf.  He included literary greats like Shakespeare, Cervantes, and Homer.

LAURA LYNCH, HOST: Last week, we asked you to tell us which books you’d put on a Five Foot Shelf in 2009, and we got lots of suggestions.  The World’s book critic, Christopher Merrill joins our discussion now.  And Chris, many people thought that Gabriel Garcia Marquez’s “100 Years of Solitude” should be on the shelf.  Many others voted for works by George Orwell, like “1984”.  Were there books of fiction that you were surprised to see on listener’s shelves?

CHRISTOPHER MERRILL:  Well, one thing that surprised me were the number of American books that were on the readers shelves.  A lot of people anted to see Toni Morrison’s work, especially “Beloved”.  I was also pleasantly surprised to find a vote for Robert Musil’s “The Man Without Qualities”, which is one of the great novels of the 20th Century.

LYNCH:  There are also some very unusual choices, like Hitler’s “Mein Kampf”?

MERRILL:  Well, I suppose if you want to have a complete education that would be one of the books that might make its way on there.  But at the same time, there are books here, psychology books on economics, John Meynard Keene, the book that could not have made it onto the first list that Eliot drew up 100 years ago.  But now more and more, it seems like an important book to be reading.  Churchill’s History of the Second World War – that seems like an important piece of the puzzle, too.

LYNCH:  And then there were also books that pointed to very, very specific interests.  Alfred Kinsey’s “Sexual Behavior in the Human Male”; Julia Child, “Mastering the Art of French Cooking”.  How do those dovetail with this idea of trying to bolster a full liberal arts education?

MERRILL:  Well, the question always is, “What constitutes an education?”  And if you look at the list drawn up 100 years ago, it was heavy on Greek drama, on English writers.  And looking on the list our listeners came up with today, one might find more interest in American writers, in psychology, in the works of science – Rachel Carson’s “Silent Spring” got a couple of votes; Steven Hawking’s “Brief History of Time” got some votes – and you realize that as society changes, it’s idea of what constitutes an education changes, and so that Five Foot Shelf begins to look a little bit different.

LYNCH:  And finally, Chris, what are the must-haves that you would have on your Five Foot Shelf?

MERRILL:  Well, one of the books I didn’t see mentioned was one of the masterpieces of the 20th Century, which is Proust’s “Search of Lost Time”, the 7-volume novel which explores all of the ways in which memory works, which I think is central to the thinking of writers around the world since then, so that would be an important one.  I would also note Chinua Achebe’s “Things Fall Apart”, the great Nigerian writer.  There are a lot of great books out there, and our listeners found them.

LYNCH:  You got to be careful, though.  You pick a 7-volume Proust, and you’re just about taking up all the shelves, there.

MERRILL:  There is a book by Alan Deboutain about how Proust can change your life, so maybe you would just take that, which is only maybe 150, 200 pages, and you get the gist of Proust, but not the pleasure of Proust.