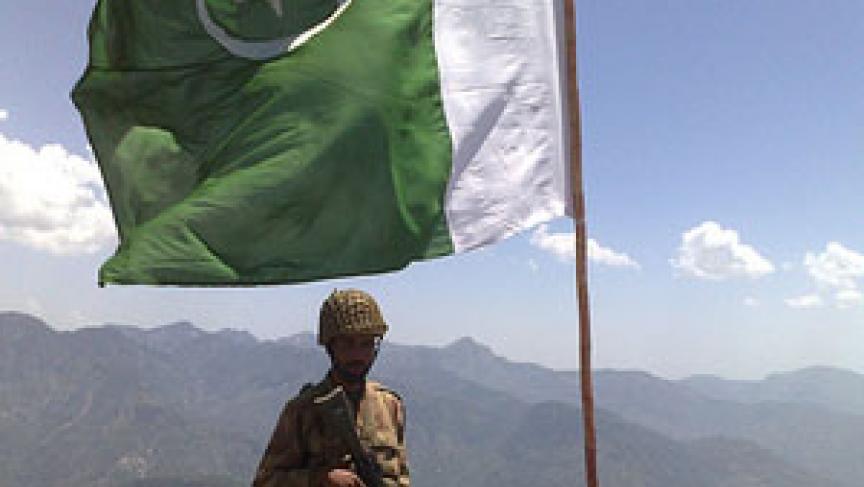 Pakistan is now a crucial battleground in the fight against Islamist extremism and it’s not just American officials saying that. So does a new audio statement allegedly voiced by AL-Qaeda's second in command. Pakistan is in the middle of a war against Al-Qaeda’s allies – the Taliban.

Reporter Charles Sennott has covered the Taliban from their early days. He's produced a series of four reports on the movement's history and fluctuating fortunes. The series is a partnership between PRI's "The World" and Globalpost.com, an international news website that Sennott co-founded.

In this report, Sennott explores how Pakistan has turned against a movement it once supported:

There is a drumbeat of war behind the news coverage of Pakistan’s ongoing offensive against the Taliban.

This offensive against the Taliban in the Swat Valley and in Waziristan has caused a wave of more than two million internally displaced people and a rising anger within the populous. Video footage of Taliban soldiers beating a girl in Swat caused wide spread revolution. On June 7 one new story in particular grabbed the country’s attention.

The story of the policemen who accepted martyrdom, as the news broadcasters put it, serves as modern parable for Pakistan. Two officers save their colleagues who were kneeling to pray while a Taliban suicide bomber tried to enter and kill them in the name of God. In an Islamabad hospital I visited one of the injured officers, Mohamed Tariq, who lay recovering from shrapnel wounds. The two officers who stopped the bomber were his good friends.

Tariq [Tranlsated from Urdu]: "These people have nothing to do with Islam. Killing other Muslims, that's not Islam. Muslims don't do this. They don't make orphans."

Tariq vowed to get right back to work in his police unit, Rescue 15, which has been active in counter terrorism, "I'm not afraid. None of us are afraid by all of this and I'll go back to the Rescue 15 as soon as I'm better."

This story captured a collective resolve against the Taliban.

To veteran journalist Rahimullah Yusefzai, this is a marked change from the anti-American sentiment that he believes undercut Pakistan’s efforts against the militants.

"They got popular public support this time. It's very different. That is a big tide you know. This is actually; they have turned the corner in that sense. But for the first time the Pakistani public, in large numbers, the majority, is supporting the military operation. Most of the political parties are supporting the military operation. So I think this is something which is going to be very effective," said Yusefzai.

There's a profound dialogue underway across Pakistan about the Taliban. The country openly supported the movement when it emerged 1994. A relationship of expediency, also shared by the United States. But when the Taliban provided refuge to Osama Bin Laden and Al-Qaeda in 1996 the US soon imposed sanctions and sought to isolate the regime. But not Pakistan. After the US-led coalition invaded Afghanistan in the wake of the 9/11 attacks the Taliban was pushed across the border. US military officials said it was given cover by the Pakistani military and allowed to reconstitute itself. And in the last few years a new Pakistani Taliban was born – one that was widely supported until now. The turn against the Taliban was highlighted at this recent conference in Islamabad. Pakistan's top religious scholars, veteran government officials, and a high ranking general all gathered here. They are the religious and military elite that for some 15 years supported the Afghan Taliban. Now this group was publicly speaking out against the Pakistani Taliban.

Mussarat Ahmedzeb is the daughter-in-law of the last Wali of Swat, a kind of religious monarch who once controlled the area and implemented Islamic law. She now runs an institute for war widows of which there are many in the Sway Valley these days.

"I see them as bullies. They don't know the meaning of Islam," said Ahmedzeb. "They're just a bunch of ... people [who] want to just blow themselves up trying to bring terror. That's not Islam for God's sake."

Another more surprising critic at the conference was Qazi Hussein Ahmed, founder of the Jamaat-e-Islami party. He has long been a part of a theological establishment in Pakistan that backed the Afghan Taliban. But he is now deeply critical of the Pakistani version of that movement, "The Taliban do not have the guidance of great Islamic thinkers and scholars. They are mainly village imams. And they have not a well thought framework of an Islamic state."

Other religious scholars have gone further and launched the Save Pakistan Movement to counter what they see as the warped ideology of the Taliban in Pakistan. So why has a conservative religious establishment turned against the Talibanor the splintered fractions that profess to be the Taliban?

Imran Khan says that's because there a lot of confusion in Pakistan about the Taliban.

Khan is a former Playboy cricket star turned political leader and conservative Muslim. He speaks of the confusion over how to deal with multiple Talibans. Islamists who did not lay down their arms in Swat as agreed but fought their way towards Islamabad and are now threatening the integrity of the Islamic state.

"I'm afraid this is just going to go on and on and I don't think Pakistan can go on like this much longer. The danger for our country is going to collapse. We are going to be what happened to Cambodia during the Vietnam War," said Khan.

These are ominous words and a hint that the Pakistani elite is now doing some serious soul searching about the kind of Islamic state that Pakistan should be. Sitting under thunder clouds in the garden of his Islamabad home Pervez Hoodbhoy, a secular intellectual, suggests Pakistan has failed to see the gathering storm while the country has been taken over by a Saudi-style puritanical Islam. Hoodbhoy blames the Punjabi religious and military elite for courting the rural Pashtun Taliban at first for self-serving geo-political reasons and then out of a lazy anti-Americanism. Finally he says the country has woken up.

"It's very interesting to see how this change came about," said Hoodbhoy. "There were hundreds of girl's schools which had been bombed in Swat. Nobody seemed to care. There were beheadings. Nobody seemed to care. And then finally the government gave in and said alright we will cave into the Taliban demands and we will sign the peace deal with them and now Shariat will be imposed. And then the Taliban just lost their marbles. They made such a disastrous mistake."

The mistake he says was when a Pakistani Taliban leader, Sufi Mohammed, went on television rejecting the constitution and democracy as anti-Islamic. It became clear the Pakistani Taliban could not be appeased and was no longer just a tool of leverage in Afghanistan but an existential threat to the country.

Hoodbhoy: "Now that was going just a bit too far. Sufi Mohammed just lost the whole support for the Taliban across Pakistan and that’s the time that the army finally mustered up the courage, the public support as well, for moving against the Taliban."

But the military offensive has come at a huge price. Two million refugees living in cramped conditions here on the edge Peshawar can attest to that. And patience is running out.

Welder Jad Mohammed Khan, blames the government for their plight, not the Taliban, [Translated from Urdu] "The government was badly prepared and the problems we were facing have just doubled since we came down here. The only thing that’s happening is that the hatred between people is growing out here. People are getting very frustrated out here and angry at the government."

The risk for the government of Pakistan is that the longer this offensive goes on against the Taliban the more likely it is to lose the vital support of the people.