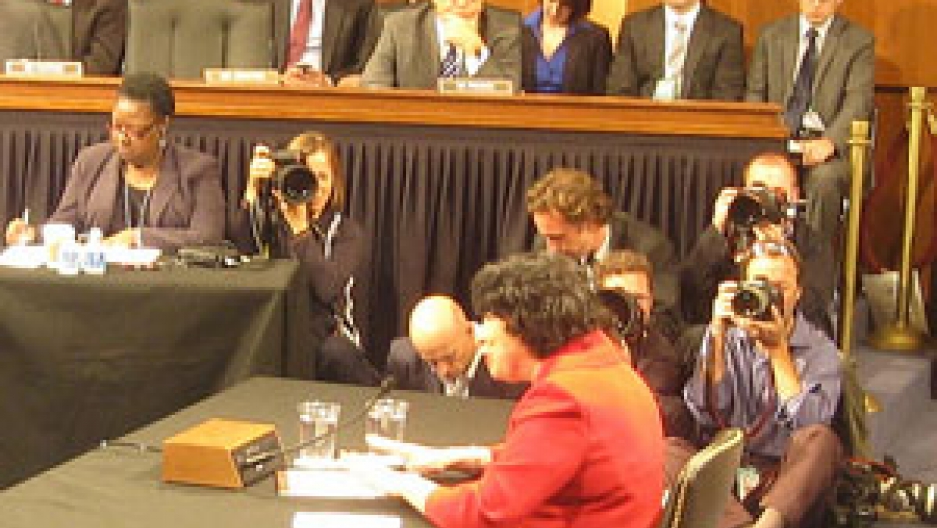 It's Day Four of the U.S. Senate's confirmation hearings for Supreme Court nominee Sonia Sotomayor, and much of what's been seen and heard amounts to a lot of puzzling rhetoric.

Are Senate confirmation hearings a chance to explore the intricacies of U.S. jurisprudence and truly assess the character of the nominee? Or just a chance for senators to impress their constituents and for nominees to tell the Senate what they want to hear?

On "The Takeaway," Nate Persily, a professor of law and political science at Columbia University said of the hearings, "The way to keep one's sanity in watching these hearings is principally to look at them as markers on our path of constitutional development."

The most recent debate at the hearings appears to boil down to this exchange between Senator Jon Kyl and Sonia Sotomayor:

Senator Jon Kyl: "Do you agree with him [President Obama] that the law only takes you the first 25 miles of the marathon, and that last mile has to be decided by what's in the judge's heart?"

Sonia Sotomayor: "No sir, I wouldn't approach the issue of judging in the way that the President does; he has to explain what he meant by judging. I can only explain what I think judges should do, which is, judges can't rely on what's in their heart, they don't determine the law. Congress makes the laws; the job of the judge is to apply the law."

Sotmayer's answer reflects the fact that she is trying to move away from the idea that her background is going to affect her decisions, says Persily, "She has been steadfastly trying to say 'the only thing that matters is the law and how I interpret it, but there's some kind objective truth out there that I'm discovering; it's not something in me to discover.'

"The funny thing is, Sotomayor feels particularly compelled to make this argument," says Persily. If you look at Justice Alito in his hearings ... he reflected on his background, he talked about his experience, his family's experience as Italian immigrants. And he was allowed to say those things because no one was going to make the charge that he was somehow going to be biased in favor of Italians who came before court.

"But because of her Berkley speech and these other quotes that have come up, she has to run away from this idea that a judge’s background is going to determine outcomes."

As for the issues that have come into play at the hearings -- gun rights, gay marriage, abortion -- Persily says that 30 years ago, they wouldn't have taken up as much time as they do now, "There's a playbook that nominees have to follow, which is they have to reveal as little as possible and to pretend that they are completely open and haven't decided a lot these controversial issues that everyone is interested in.

"On the one hand you know that the judge is not going to reflect anything about his or her ideology. And so therefore, you try to get something in their background, whether it's these comments that Sotomayor made in her speeches, whether it's clubs that they've been members of at some other point in their lives -- and you go after those things which are more likely going to bury a nominee."

Persily's takeaway for the hearings: "It is a historic appointment, and all of this preoccupation with the 'wise Latino' comment and her judicial background, is I think in retrospect -- say 30 years from now -- we're going to be saying, 'wow this was an example of our path on to a society where there's not going to be one racial group as a majority; it represents our diversity as a country.'"