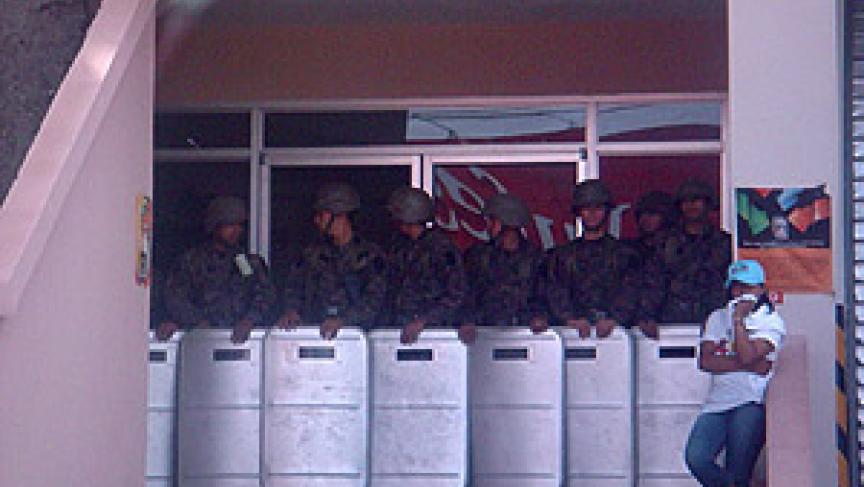 It's a waiting game in Honduras -- people in the capital Tegucigalpa appear to be waiting for the next step in the leadership crisis that’s rocked the Central American nation. Their President, Manuel Zelaya, was deposed in a military coup and kicked out of the country.

The US has joined much of the world in condemning his ouster -- that's left Washington in an unusual position, siding with Venezuela's leftist president, Hugo Chavez, on the issue.

It's not often the presidents of the United States and Venezuela agree. Here's Barack Obama: "President Zelaya was democratically elected, he had not yet completed his term. We believe that the coup was not legal, and that President Zelaya remains the president of Honduras."

Using slightly more colorful language, Hugo Chavez also denounced events in Honduras. The Venezuelan leader called it a Trogdlodyte Coup D'etat, and urged Honduran soldiers to use restraint against unarmed citizens. Never mind that Chavez himself threatened military action of his ambassador in Honduras was harmed.

The Interim Government of Honduras has indicated it would consider early elections there if that would satisfy the international community. But the end of the political standoff remains far from certain.

Michael Shifter is with the Inter American Dialogue, a Washington think-tank. He cautions that the apparent agreement that President Zelaya ought to be restored to power may be more superficial than appears: "The are some differences for the motivation for why the United States came to the position that it did, and why countries like Venezuela and Bolivia, Ecuador, have also condemned what happened. For those countries, they are governments identified of the left. Zelaya became an ally of them, so there is a kind of a political support there, which is different, I think, from the US’s point of view, which is trying to stake out a position in support of the rule of law and democratic principles, which were clearly violated in this case."

Previous US presidents haven't always taken this position. Most recently, when Hugo Chavez was temporarily ousted in a coup in 2002, the Bush Administration kept quiet.

Larry Birns is director of the council on Hemispheric Affairs: "The United States is clearly aiming for a new trajectory in its regional policy. This provides a high visibility opportunity, for the United States to take a leadership position in establishing firmly that no extra constitutional overturn of a government by the country’s military will be tolerated by the Inter-American community. That's a good thing, to take place."

The message being the US might not like the person in power, but the democratic process must prevail.

Jennifer McCoy of the Carter Center calls the political stand off in Honduras the result of democracy's growing pains in parts of Latin America: "That could be the silver lining or part of the explanation for the crisis."