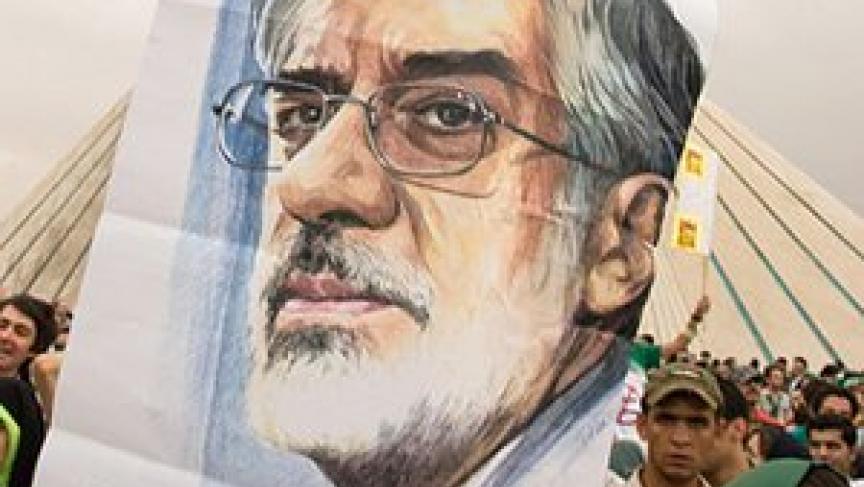 Mir Hussein Moussavi put out a statement branding Iran's next government as illegitimate. And he said the crackdown following the disputed June 12th election amounts to a coup. That same thought was echoed today by former Iranian president Mohammad Khatami. He demanded the release of all political prisoners, but the government in Iran isn't budging. It's keeping a tight lid on demonstrations, and on the media.

"The World" talked to Reza Aslan, an Iranian author living in the United States. He is a columnist for the website, The Daily Beast, and his books include "How to Win a Cosmic War."

He says there's an internal power struggle going on in Iran right now: "What we've seen over the last two, two and a half weeks in Iran is essentially a military coup. Those within Iran recognize that the election of Adhmidinijad four years ago was a moment in which the military began to play a much larger role in Iranian politics than they ever had before.

"Four years later, when it seemed as though Adhmidinijad was going to lose, I think the revolutionary guard, by all accounts made sure that the election went his way. And, will Iran be allowed to become a military State in the shape of an Egypt or Myanmar, or even a Pakistan, a country in which regardless of who's in charge, the military is in charge. This is an internal struggle within Iran over who is going to lead this nation into the future, whether it'll be the military, or whether it'll be the clerics, or whether it'll be the younger people who want a real separation between the religion and the State."

Events in the US have had an impact says Aslan: "Phrases like the 'Axis of Evil' made Iranians very clearly a mark for the American military. And indeed, for the last 30 years, American foreign policy towards Iran has been predicated on regime change. And it seems as though the Obama Administration is no longer interested in regime change, and that has really changed the equation in Iran.

"It's made the United States no longer an omni present enemy, if you will. Now, the real issue is, what can we do from here? And unfortunately, because we have had 30 years of a policy of containment and sanctions and isolations towards Iran, there's really nothing we can do any longer to punish Iran further. I mean, certainly we can add some more sanctions, but it doesn't seem like that's gonna make any difference. If you don't have a relationship with a country, then you can't punish it when that country does things like steal an election for example. So really, the real hope right now is with the European Union, which does have relationships with Iran, does have embassies and ambassadors in Iran. And is in a much better place to punish Iran for its actions by, for instance, withdrawing its ambassadors."

Aslan believes the unrest in the past weeks in Iran is just the beginning: "The regime will probably, sometime in the next few days, if not the next week, go ahead and arrest Moussavi. He's been under house arrest for much of the last week and a half. Now, if that happens, I know that a lot of my sources in Iran tell that the protestors have plans to launch a massive protest, and perhaps, even a strike. And really the strikes right now is what we should be paying attention to.

"Ultimately what brought down the Shah 30 years ago, is that the bazarri merchants joined in the anti-Shah protests. And once they decided to shut down their stores, and the economy of the Iran ground to a halt, that's when it was clear that the revolution was going to succeed. I think that what you're gonna see now over the next few weeks is an attempt by the protestors to use the same playbook, to try to shut down the markets in the major cities in Iran, as a way of damaging the economy to the point where the government will have to respond in some way or another.

"The rumors of the demise of the uprising have been greatly exaggerated. This, I think, is a movement that's just beginning. We have to remember that in '79, the revolution that ultimately brought down the Shah, started in 1978. It took a year of ups and downs of ebbs and flows of times in which it seemed like the government was winning, times in which it seemed like the protestors was winning. So, we need to recognize that this is going to be a long process, it's a chess match, more than anything else, and that this is far from over."