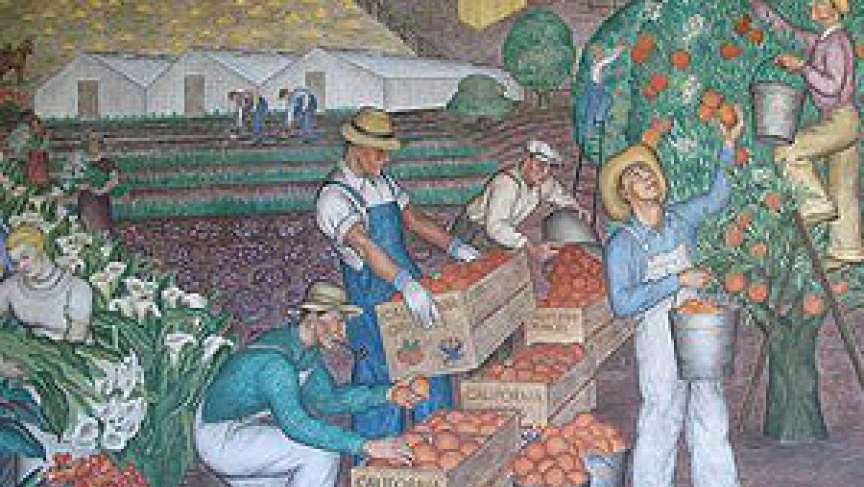 As part of the New Deal, writers were employed to document what America eats. (Flickr user garysoup (cc: by-nc-sa))

During the Great Depression, President Franklin Roosevelt decided that even unemployed writers needed to be put to work. So as part of the New Deal he created the Federal Writers Project and dispatched scribes to all corners of the nation to document, among other topics, food. What America Eats became a national compendium of what people were cooking and eating, region by region.

Being a "locavore" is a fashionable lifestyle choice now. But in 1940 you ate locally because you had to—the lack of highways and freezers kept diners to a regional and seasonal menu long before it became chic. Notable writers including Eudora Welty who covered Mississippi meals and Zora Neale Hurston who tackled her favorite Floridian foods all weighed in on regional cuisine for the project.

In his new book, "Food of a Younger Land," author Mark Kurlansky revives the unfinished America Eats project. On "The Takeaway," he talked about the diet of a nation in the New Deal era.

Kurlansky: "People and food weren't being moved around the country that much, and people pretty much lived off of what their area produced, and there were very strong regional traditions, and you could travel around America on what they called highways -- which were two lanes -- and stop at restaurants along the way, and not just region to region, but county to county you would experience different food."

He says looking through "What America Eats" is like opening a time capsule: "There are good and bad things about visiting 1940 America, and one of the things you realize, especially as you read the Southern parts -- you're now in the pre-Civil Rights South, and this is the WPA, these were the great liberals and progressives of our time, and some of the language is so racist ..."

Kurlansky did try one recipe from the compendium: " ... Persimmon Pudding, which is still very well known in only about two or three counties of Indiana."

Indiana Persimmon Pudding recipe:
(from "The Food of a Younger Land," by Mark Kurlansky, published by Riverhead Books, 2009. This recipe was originally collected for America Eats, a WPA project; it was supplied by Richard McCurry of Bloomington, Indiana.)