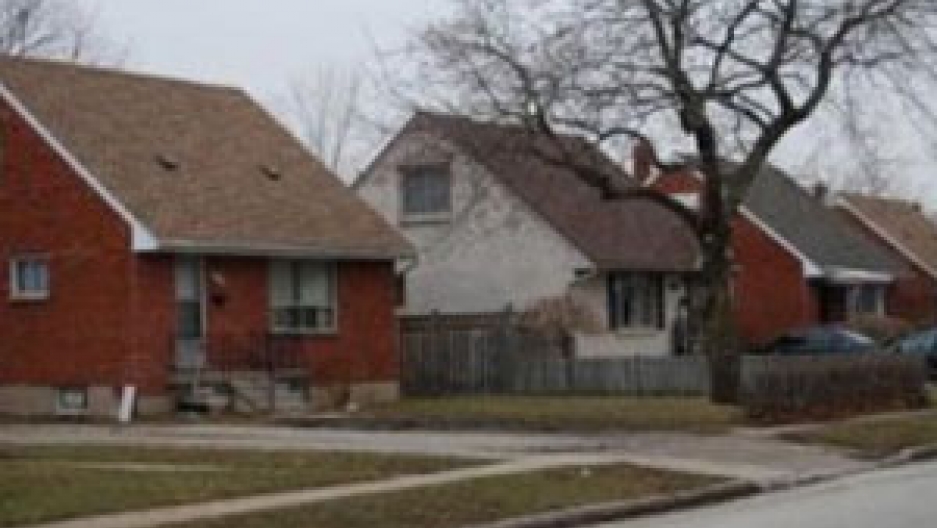 There are about a million so-called “wartime homes” in Canada.  They were built during World War Two, to house people working in the war effort.   After the war, returning soldiers raised their families there. Nearly all of Canada’s wartime homes are still standing, and it should come as no surprise that a lot of them have seen better days.  But instead of tearing them down, one agency wants to turn them "green."  "The World’s" Jason Margolis begins the story in Windsor, Ontario.

JASON MARGOLIS:  Here’s an odd quirk of geography about the Canadian city of Windsor.

JIM STEELE:  We're driving along the Detroit River.  A lot of people don’t realize that Detroit is due north of us.

MARGOLIS:  Jim Steele is taking me on a driving tour of Windsor.  Steele runs the Windsor-Essex Community Housing Corporation, which manages public housing in this small city of 200,000.  Like it’s neighbor to the north, Windsor is an auto manufacturing town.  It doesn’t look as rundown as Detroit, but Windsor too has seen better days.  The architecture reflects the mood of the people here:  humble and efficient.

STEELE:  And what you’re looking at here are rows of houses that look remarkably the same, very simple in design, very modest accommodation.

STEELE: There you go.  That’s a nice way to describe it.  They do look like a monopoly house.

MARGOLIS:  There are a million homes almost exactly like this in Canada.  They call them wartime homes -- houses that were built for workers in the mid-20th century, back when energy was cheap.  Now, Steele’s agency wants to retrofit these five homes in Windsor for the energy and economic realities of the 21st century.

MARGOLIS:  The full option – that means making the home totally energy efficient:  needing no heat, no electricity from outside sources.  It’s a tall order, but Steele had heard about a small Toronto design firm that had done it with a single wartime home in Toronto.  Lorraine Gautier spearheaded the project.

YVES GAUTIER:  There are ads out about this house where it says, “This house will pay its own energy bill”, and in effect that’s what is happening.  So frankly we think most of us would love to have that.

MARGOLIS: Gautier is a partner in the firm “Work Worth Doing”. The company transformed what they call the “Now House” in phases.  First, they equipped it with the basics, things like proper insulation.

GAUTIER:  I like to say we wrapped a very large cozy blanket around this entire house.

MARGOLIS:  Then they added such things as new windows and CFL light bulbs.  They slapped on solar panels for electricity and hot water.  And there you go.  Gautier says the house now actually produces more electricity than it uses.

GAUTIER:  In fact, we’ve turned this home owner into a mini utility.

MARGOLIS:  But here’s the catch.

MARGOLIS:  Okay. Back to the Canada/US border in Windsor and Jim Steele. And how much are one of those homes worth?

MARGOLIS:  That’s $85,000 Canadian dollars.  But still, the obvious question – why pour more money into a home than it’s worth?  Wouldn’t that make the homes unaffordable?  Steele admits, it’s a good question.   Back in her office in Toronto, Lorraine Gautier is working on finding an answer.  She lays out some drawings on an expansive table.

GAUTIER:  So we proposed to them five or six different models that they could consider.

MARGOLIS:  The base model retrofit includes things like insulation and putting in water-saving fixtures.  That’s relatively cheap and easy to do.

GAUTIER:  And then as you go up the ladder, you can add things to it.  But to get to net zero, everything adds a huge amount.  So another $25,000 to start looking at solar energy and that kind of stuff.  So you know, you get to the – what I would call “the all singing, all dancing model.” And you’re back up to the $85,000 range.

MARGOLIS:  Which brings us back to the catch.  But Gautier says with each passing month, her firm’s designers and architects are figuring out how to reduce costs while boosting energy savings.  Ultimately though, what brings down the cost of anything?  Two things.  The first is volume.  That’s essentially what Henry Ford taught us.  If you build one car – or in this case, retrofit one house – that’s expensive.  But if you do it a million times, the cost can come way down.  Gautier and her partners in Windsor hope that their modest start will put Canada on a path to retrofitting all 1 million of its wartime homes.  The second way to reduce costs is government incentives.  That’s where people like Peter Love come in.

PETER LOVE: We’re calling for a culture of conservation.

MARGOLIS: Love is the chief conservation officer with the Ontario Power Authority.  The Ontario government recently adopted a slate of new energy efficiency incentives for new and existing housing.  The list includes a stronger building code for efficiency, upfront financing for renewable energy products.  And a guaranteed price for small producers of renewable energy, such as solar paneled houses.

LOVE: It’s modeled on what is in Europe, in Germany, Spain, and Denmark.  So it’s been hugely successful in Germany, in helping Germany become a real leader in renewable energy, and that’s what we’re looking to do as part of the Green Energy Act Ontario.

MARGOLIS:  The people in Windsor hope that these efforts will help them affordably revitalize their wartime houses.  Jim Steele says retrofitting it would be a lot cheaper than ripping them down.

STEELE:  There’s a great little community that’s already here. So from our end of it, why rebuild that community somewhere else if there is an economic model that works well for our social housing business?  Our thought is we could take these units, retrofit them, and make the economic model work again for –