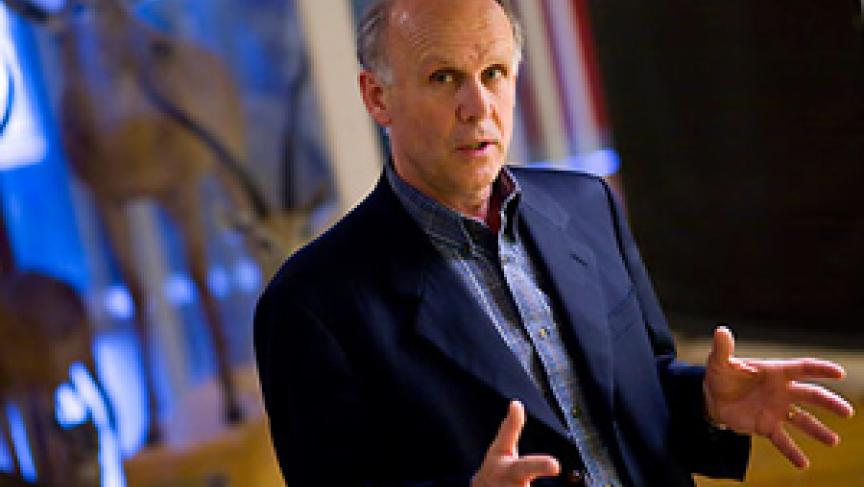 Wrangham is author of “Catching Fire,” which argues that the development of cooking by our ancestors was a key to unlocking human potential. Share your thoughts on his assertions about cooking, eating and evolution with Dr. Wrangham and other listeners at "The World" Science Forum.

"What we've discovered in the last few years is that, although of course we can eat lots of foods raw, and although every other animal survives well on raw food, humans really do seem to be special because we cannot survive really effectively on raw food. The only exception is modern, urban society where you can have access to very high class agricultural domesticated foods.

"But for people living in a state of nature, as it were, hunters and gatherers living in the wild, there's no evidence at all that we can survive on raw food. And what this means is that humans are fundamentally adapted to cooking as a part of their existence ... and then the fascinating question is, how long as this been going on?"

Wrangham says humans began cooking almost two million years ago, and biology offers strong evidence of this, " ... because we have evolved to have a tremendous reduction in various aspects of our intestinal system, and it starts with the mouth -- we've got a tiny little mouth compared to other great apes, we have small teeth, and we have small guts overall -- I mean our guts a the smallest in relation to our body size of any of the primates.

"Once we started eating cooked food, then it was a great saving to the body in terms of energy to be able to get rid of the intestines we didn't need. And we didn't need it because our food was very high density and very easily digested once we started cooking."

The smaller gut is evidence of when cooking started says Wrangham: "So we now have these characteristic features compared to other non-human primates -- the small mouth, the small teeth, the small gut -- and we can pinpoint when these things evolved because the fossil record tells us when we had small mouths, when we had small teeth, and when our guts became small ... and the answer is this happened with the evolution of Homo erectus, between 1.8 and 1.9 million years ago.

"It's a signal that is really quite strong -- it's very difficult to imagine how that species, Homo erectus, could have had these reductions in the gut unless they had such good food processing that, basically, they had to cook."

Cooked food increases the amount of energy that humans get out of the food: "If you took a pound of raw steak and you eat that, and you compared that to eating a pound of cooked steak, then you are going to get significantly extra calories out of eating the cooked steak."

Softening food allows it to be eaten quickly and with less effort, and allowed for more caloric intake and less energy expenditure, which helped humans evolve.

Wrangham also has a theory about how cooking became women's work: "The emergence of cooking, this enormously valuable addition to our skill set, meant that everybody benefited from eating cooked food, men and women. And maybe you can imagine that the males and females were all individually cooking for themselves at first, but it would rapidly have emerged to the males the idea that, 'hey, you know something, if I come back hungry and not having got my food together for the day, I can bum off some woman.'

"And the reason they can do that is because when you have cooking, you have for the first time an absolute necessity for the food to remain the sight of everybody else while it is being prepared. You cannot simply put all the food into your mouth right away because obviously then it wouldn't be cooked. So then this creates a problem -- it creates an opportunity for theft ... I think what's happen is that this exposure to theft as a consequence to cooking ... has led to the development of a primitive protection racket ... she is vulnerable, so it ends up with, she feeds him and what she gets out of it is security."

Share your thoughts on his assertions about cooking, eating and evolution with Dr. Wrangham and other listeners at "The World" Science Forum.