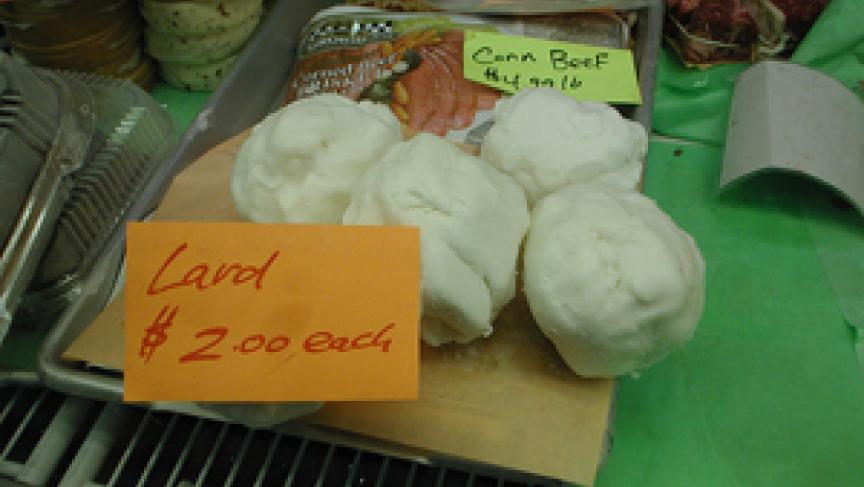 Lard was once the most common fat for baking, but came to be seen as dirty and unhealthful. Now, food scientists have shown that home-rendered lard isn't as bad for your health as, say, margarine. And it tastes wonderful.

On "The Takeaway," Todd Zwillich and Andrea Bernstein talked to food writer Regina Schrambling and chef Zarela Martinez, a self-proclaimed lard crusader, about the benefits of lard.

Martinez has been preaching the gospel of lard for over fifteen years and is glad that people are finally listening. She says lard gained a bad reputation when it became commercially produced: "Lard originally was home-rendered and soft, when you turn something hard you saturate the molecules and that was when it became really bad. But home-rendered lard is two-thirds unsaturated, plus it has oleic acid which is the exact same thing olive oil has that helps you break down cholesterol. So it's only when it became commercially produced that it became a bad thing for you."

Schrambling says the negative image of lard is wrong, and that it's the transfat products like margarine that's bad for us: "It's not bad for you, number one, and it's natural -- that's the thing ... we've been sold the synthetic all these years and we've swallowed that, that it's good for you, it's not good for you."

She walks through the steps of home-rendering lard: "All you have to do is just get unsalted pork fat of good quality ... and then you just cut it in little pieces, freeze it a little while, and cook it very slowly on the stove for about an hour."

Schrambling says high-quality lard can be purchased: "You can buy it, like at a farmers market -- Flying Pigs makes an amazing lard ... Flying Pigs Farm -- it's excellent. It's six dollars for eight ounces."