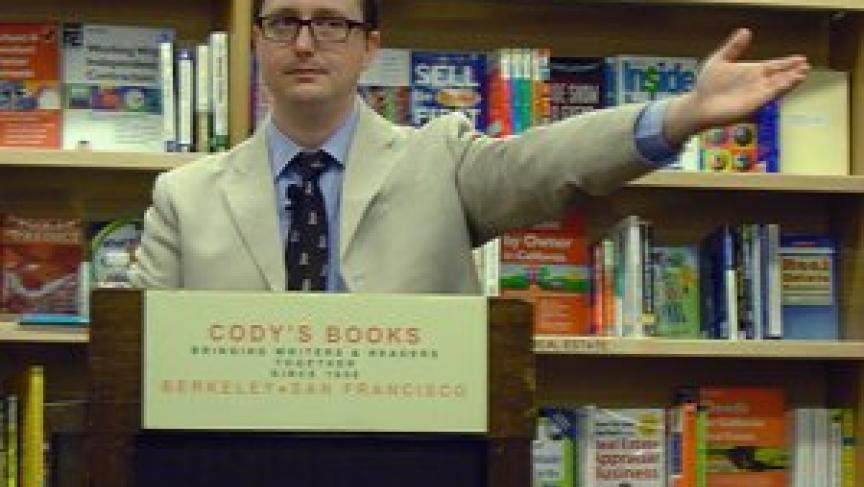 Maybe you saw the clips that have been playing all weekend long.  At the Radio and TV Correspondents' Dinner: on the dais, the President of the United States, some bigwig journalists there in the hall.  Jounralists are sitting, eating, listening to the President, listening to their own talk to themselves.  Not in the hall were any of the tweeters or citizen journalists that are dominating the headlines.  There was even a joke from the stage that referred to them.

"At this very moment, the fate of Iran is strangely entwined with the sleep schedules of the geeks who maintain the servers at Twitter and YouTube."

The man who composed that joke, John Hodgman, writer, actor, and comedian.  You may know him from the Apple commercials, or you may know him from Comedy Central.  He spoke at the event, and afterwards, took the time to reflect upon the occasion and the state of the news media.

"What we are experiencing right now with Twitter is the effect of what Andrew Sullivan calls 'journalistic pointilism.'  You have now thousands of, if not many, many more, individual voices that are coming over from Iran, specifically, via Twitter or via YouTube, and it is incredibly important.  But, each individual voice is confused, perhaps, or not always reliable, not always a perfect picture of what is going on."

Interviewer John Hockenberry offered, "Well, it's out of context, anyway."

"Exactly," says Hodgman.  "But you get from the entire cloud of information that is coming over a larger, broader, and fascinating picture that was never seen before because it is individuals speaking to individuals."

In 2006, Stephen Colbert delivered a contoversial speech at the Radio and TV Correspondents' Dinner, critical of the current President of the time, George W. Bush.  It was in this new context that Hodgman delivered his address.

"As a member of 'The Daily Show' and 'The Colbert (Report)' family, obviously I felt very keenly the very high bar that Stephen had set.  It became clear that that was a destructive path to think on; there was no way to try to match it.  You just had to do your own thing."

Bonus Audio: John Hodgman welcomes attendees to MaxFunCon 2009, from Jesse Thorn, host of The Sound of Young America, with a rousing address and a friendly camp song in his keynote address: