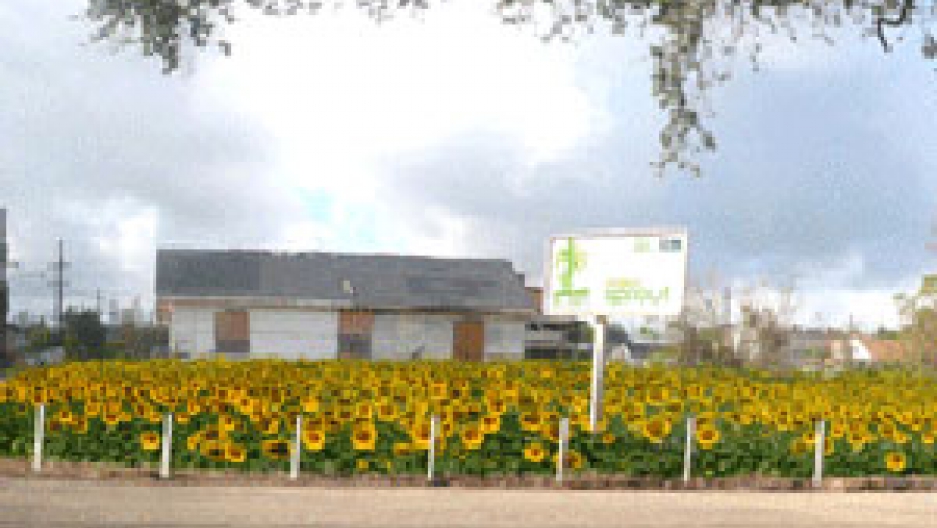 An artist's rendition of what a test plot will look like after the sunflowers grow to maturity. (Image: Will Bradshaw)

It's hard not to smile at a field full of radiant sunflowers, and that's one reason why a redevelopment group in New Orleans is planting the giant blossoms in vacant lots, a bid to reclaim a badly blighted neighborhood near the superdome. Not only will the sunflowers brighten people's lives, they'll also help power cars and trucks.

Will Bradshaw is president of Green Coast Enterprises in New Orleans, and a partner in Project Sprout, which is based on a similar program at Pittsburgh. On "Living on Earth," he explains how the project works, and what he hopes it will do for blighted neighborhoods.

Project Sprout recently planted its first test plot of sunflowers in New Olreans, on the intersection of Jackson and Johnson. Bradshaw describes the lots where the sunflowers were planted: "They were largely overgrown. One of them had been filled with construction debris from what looked like a foundation excavation. So it had some pieces of concrete and rebar and a bunch of piles of dirt. And then grass and weeds and whatnot had grown over the top of that. Another had been used by a road crew illegally to store their materials, including some potentially contaminating product for curing concrete in a big 55-gallon drum that was just open. Another had an old boat that had been basically rotted in half and been left there and some tires and stuff like that. But they were all largely abandoned lots that had just been used for illegal dumping."

The sunflowers will actually take some toxins out of the soil: "There's no question that sunflowers make soils better with respect to the level of heavy metals. What is debated about it is how much better and how quickly the things get better. There has been some research here in New Orleans out of the Center for Bioenvironmental Research at Tulane and Xavier that shows that because the pH levels in most of the soils in New Orleans, that the uptake of heavy metals is significantly delayed. And Howard Mielke in particular has done some research that shows it may take as much as a thousand years to actually clean a heavily contaminated plot in New Orleans. But there's also some competing research that comes out of Dillard University that has shown that in a couple of growing seasons a lot in Central City moved from being unsafe according to EPA standards to a safe level for alternative uses."

Once the plants take out the toxins, they are themselves contaminated, with most of the contaimnation held in the stalk. Bradshaw says that, when sunflowers are planted in soil with high levels of lead, the stalks need to be treated as a biohazard.

The sunflower seeds can be used to make biodiesel, according to Bradshaw: "Yeah, we'll harvest the flowers themselves and extract the seeds and the seeds are actually where the oil is. And we'll press the seeds and then that will create some oil that can be used with recycled vegetable oil. We won't make very much. These lots will probably produce somewhere between 20 and 50 gallons – maybe a gas tank – but what we will be able to do is work with someone else who is processing or reprocessing used vegetable oil, and the virgin oils actually can be mixed with used vegetable oil to improve the quality of the recycled grease."

As for why sunflowers and not other crops: "One of the most important things about Project Sprout is that sunflowers really create hope. People have a direct connection to them. Most people have a sunflower story – you know, their grandmother used to plant sunflowers in her yard, that they used to harvest them at home when they were growing up. There's this real connection that people have with them that signals a brighter future than what people see for that space now."

Bradshaw says the plantings are not long term: "Hopefully a decade from now what you'll see is lots that were covered in sunflowers. You know, it's a little bit of an interesting model in the sense that we don't actually want to be over the long term, planting things all over the place. What we would like to be doing is targeted planting in neighborhoods that suffer from these significant blight problems at a large scale. And we think that that would really create a significant turning point for that place. And then you start to sort of stabilize that neighborhood and allow for other uses to come it."