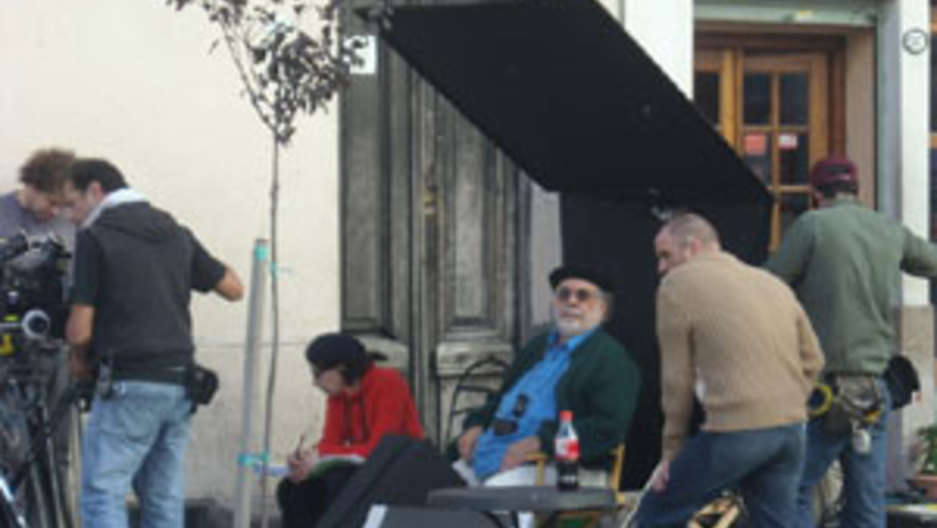 A new film by Francis Ford Coppola opens today in New York and Los Angeles. It’s called Tetro. It’s about a family – a world famous conductor, his two sons and their complicated history. The younger son, a teenager, tracks down his long, estranged brother in Argentina. The film takes place in Buenos Aires. Coppola shot the film there with much of his supporting cast and crew from Argentina and for the soundtrack the director turned to Argentina native Osvaldo Golijov.

On "The World," host Lisa Mullins had a conversation with Francis Ford Coppola about the film. He directed, produced, and wrote the screenplay for Tetro. It was his first screenplay in more than 30 years. Coppola shot most of the movie in black and white as a tribute to directors who influenced him such as Lucchino Visconti and Elia Kazan. He also felt black and white highlighted the intensity of the brothers’ emotions.

FRANCIS FORD COPPOLA: The story is a story of a 17-year-old kid who goes hunting for an older brother whom he had idolized and who disappeared under some family conflict that he didn’t really know about. So when he gets to meet the brother and even discover some of the brother’s writings, those writings which deal with the past and tell the story of what had happened are photographed in color almost as they are home movies. And the boy also talks about what a tremendous influence the brother had been on him. “Everything I love I learned from you,” he said. “Those movies you brought me to.” And one of the movies he’s talking about is Tales of Hoffmann. When he actually reads some of the brother’s diary or writing he imagines it as though it’s a scene out of Tales of Hoffmann which was the Powell-Pressburger film shot in technicolor and a story told through dance. So as he learns the story he sort of imagines it as though it were a Michael Powell ballet sequence.

HOST, LISA MULLINS: The word Tetro in Italian refers to something dark. The darkness of family secrets well-kept is the focus of the film Tetro which opens today. Tetro was written and directed by our guest Francis Ford Coppola. The film is about the rivalry between two brothers and their overpowering father, a masterful conductor. It happens that Francis Ford Coppola’s own father was an esteemed musician, Carmine Coppola. It also happens that this day, June 11th, would have been the elder Coppola’s 99th birthday. He passed away in 1991 but Francis Ford Coppola still can summon the excitement around this day.

COPPOLA: June 11th, my dad he used to take us, all the kids, to Coney Island on June 11th and we loved that.

MULLINS: On his birthday.

COPPOLA: When his birthday would come around, because we’d all go to Coney Island and to the steeplechase. It was like the most anticipated date other than our own birthday or Christmas. And my father way quite a bit different than the father is in Tetro. Much of my life at home my father was struggling – a very talented man not quite able to be fulfilled with the opportunities he longed for. I fortunately got to see him have his success later in life partly due to me and my film career but…

MULLINS: We should say because he wrote some of the music for your films.

COPPOLA: He wrote… Yes a lot of the scores and indeed won an Oscar for "Godfather 2." So I did get to see him you know have his break. It was what we used to pray for when we were little kids; that you know daddy would get his break because he wasn’t getting it. I thought it was the break for his car in fact at first. But the character in the film is more of a really powerhouse, international maestro – more on the lines of a [PH] Von Carian and the father is clearly a monster in the movie and the film does take itself almost into you know Greek drama where you have the father in conflict with his sons and who gets to be the top dog kind of thing.

MULLINS: And the father in the film says at one point he pronounces to his son, there’s room for only one genius in this family. It sounds like your father did not have the same philosophy.

COPPOLA: Well he might have had some of the ingredients had he had some of the success he wanted. He was egotistical, justifiably, he was probably one of the greatest flutists – or flautists depending on how much they’re paid a week he used to say, whether you were a flutist or a flautist. And he was egotistical. You know he saw things from his own lense as you say but he also had many wonderful attributes as a father and one of them was the things he taught us. You could always go to him and say, oh you know tell me about Mozart or tell me about Beethoven or tell me about Brahms and he knew everything.

MULLINS: We should say that the tango is something that’s iconic for Argentina and one would think that when you’re doing a film that’s based there with the music recorded there by an Argentinean-born artist, Osvaldo Golijov, that you would have more overt tango. You didn’t take that route or he didn’t take that route. I’m not sure who took the lead on that but tell us the process of deciding how the music, which is very evocative, would play out.

COPPOLA: Well when one goes to a place like that you don’t want to just do a film that’s postcards of tourist’s view of Buenos Aires. We shot the film in a very kind of obscure part of the city. Sort of almost like Harlem or Little Italy called La Boca. It was perfect for the bohemian setting that I wanted for my story and I didn’t really want to have as a tourist would want to see it. There are influences of tango, schools of tango, or of songs or of music but it’s more less known and less popularized. So I mean it wasn’t in my intention to go to Argentina and do a superficial glimpse of it. I really lived there for a year and a quarter and tried to get a sense of what it felt like to be there and put that in the film rather than a more, as I say, touristical view.

MULLINS: Could I just ask you also one other thing about the end of the film. The last words that are spoken are, “we’re family.” You’ve talked a lot about your own family and the influences that we can see in the film that came form your family. I wonder if this is the kind of film that one can only write and direct after you have lived as long as you have. I mean I think you turned 70 this year. Is that correct?

MULLINS: Yeah. Is this like, especially when you’re talking about family, do you bring a different sensibility than you would have in the days of the Godfather or Apocalypse Now or any other film.

COPPOLA: You know I don’t think so. I think… Yeah he says at the end, “we’re a family.” But the whole film is about Tetro played by Vincent Gallo who has like rejected his family, who’s divorced it as he says. And you know as we know we’re all learning what love is from that first experience when we’re little and our mother and our father and our brothers and we love our families. Then when you love someone so much and someone hurts someone’s feelings it turns to you know love and hate at the same time. And that’s what I was looking at – the theme of rivalry within an extremely creative family. And inevitably one is more successful than the other one; is richer than the other one. And I was curious even about that being handed down through generations and I was trying to understand form my own personal experience and focusing on that I wanted to learn why I felt as I did. And you know I’ve said often that when you write an original screenplay it’s a little bit like asking a question. And when you make the film and finish the film you get the answers. And in both cases of these two films I’ve made, Youth without Youth and Tetro, that’s sort of what’s happened and why I’m excited about doing it again.

MULLINS: It’s one of those things where I guess to get the answer you can’t go around it you have to go through it which is what the characters did and I guess in the making of this film what you did too.

MULLINS: Coppola chose a native Argentine to compose the soundtrack. Osvaldo Golijov says that the obvious theme might have been a bright Argentine tango but Coppola’s script led him to compose a darker score.

OSVALDO GOLIJOV: It’s a very intense family drama with really dark passions and dark things happen. Actually the subject matter is terrifying but the imagination and the playfulness in the writing and the acting makes it more striking even.

MULLINS: So how do you conceive of a piece of music with that kind of dark background?

GOLIJOV: Well the movie happens in Buenos Aires therefore tango is the natural idiom. But you know what’s interesting, we spoke with Francis and he said something really interesting. He said let’s play with tango but not because the movie happens in Buenos Aires but because tango is the musical equivalent to what the passions in this movie, this rivalry between brothers, entails. So it was a very, very deep observation.