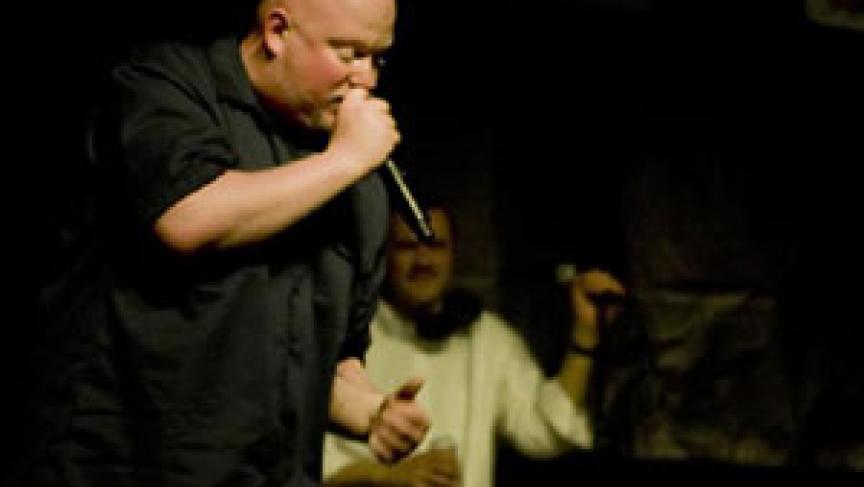 Picture a rapper: he's Muslim, he's white, he's from Minnesota, he's an albino.  Brother Ali is that rapper, and he still manages to find expectations to defy.  Ali's new EP "The Truth is Here," like his previous work, is a raw document about family, faith, and seeking happiness in tough times.

Ali moved from town to town in the upper Midwest, from his birthplace of Madison, to small towns throughout Michigan before settling in Minneapolis about 15 years ago.  As you might expect, the move from school to school was tough on him, as it would be for any child.

"Yep, I was the albino kid," says Ali.  After some time, he made a discovery: "Until I was about 8 or 9 years old, I discovered that I didn't always have to be just the albino kid.  I could be the albino kid that raps and b-boys, breakdance."

Seeing some other, older kids in the hip-hop scene gave Ali and his brother an aspiration.  Soon he was doing graffiti, breakdancing, and memorizing other rappers' verses.  "When I was 7 or 8 years old, I could say every Melle Mel rap there ever was.  You know, Slick Rick, Run D.M.C.  I knew all of these guys' rhymes and I could recite them verbatim and almost do their voice.

"It was kind of like a party trick; I would go to a new school and try to find the hip-hop kids, and I might just walk up and just start doing Run D.M.C. at the top of my lungs.  I would make friends like that.

"As I became a teenager, I started wrtiting my own songs and it became about more of an identity thing for me, that this is how I relate to the world.  Because you know, like you said, being albino really is different.  You're not really a part of any thing, in terms of just normal identity."

Ali's albinism made him further isolated, feeling out of place in the Afican-American community as well as the white community.  While he was raised in a Christian home, he had a realization when he was asked to be confirmed that he could not be a part of the church.  Citing a non-belief in the clergy, original sin, and other things, he recalls, "I said, 'I'm not going to join this church.'  I felt like I was going to be disrespectful to the people that really did believe in it, for me to just do it.

"Hip-hop introduced me to Malcolm X, and I read his biography, and I got really interested in 'What is this thing that made him who he was?'  So I started studying Islam.

Ali's ascent in the Minneapolis music world started in a place that really lacked a hip-hop scene. He performed shows in coffee houses and in the rock clubs, since there were no exclusive hip-hop venues.

"There was punk rock, indie rock with the white kids, and with the black kids there was this remants of the Prince/Morris Day and the Time scene."

Ali credits the birth of the hip-hop scene with a his current backing DJ on a radio show on the local university's radio station; it brought together elements from different parts of town that separate, were not creating enough momentum.  After some shows with rappers from other parts of the city, Brother Ali was able to get away from some past efforts, true to his DIY roots: cleaning bathrooms in the clubs in order to get to perform there, and carrying gear and equipment for others also in exchange for the opportunity to perform.

Ali has since toured nationally and moved up in the ranks to perform on "The Late Show" David Letterman and on "Late Night," Conan O'Brien's show.  His most recent full-length album reached #69 on the Billboard 200 chart.