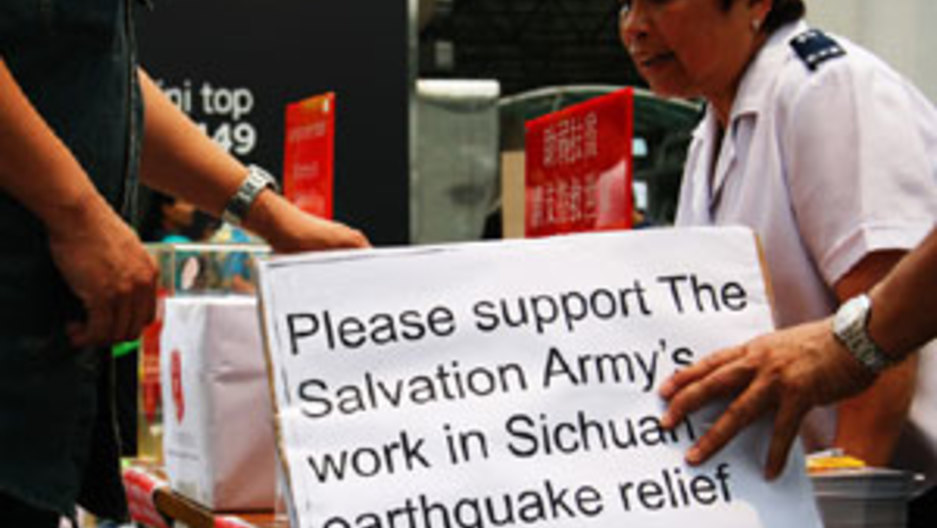 It was a year ago this month that a deadly earthquake hit Sichuan Province in southwestern China. The quake measured 7.9 on the Richter Scale. It left almost 88,000 people dead or missing and another 5 million homeless. The earthquake prompted an outpouring of donations and volunteers. At the time, that response seemed to create a new sense of community and philanthropy in China. The World’s Mary Kay Magistad prepared this report about how strong that feeling is one year later.

This was the scene in Sichuan last year, at a stadium turned into a camp for people made homeless by the earthquake. This woman was calling for volunteers, and volunteers were everywhere. They were sorting through donated clothes and passing out food. They were carrying signs with the names of the missing to try to reunite families. All told, nearly $11 billion dollars was donated for earthquake relief, and some 100,000 volunteers showed up to help.

"The earthquake tapped into a lot of different things, actually. I think it wasn’t just the empathy or the compassion, it was also a sense of nationalism and other things that really sort of opened the floodgates for the giving."

Grace Chiang is managing director of the Social Venture Group in Shanghai. It helps Chinese philanthropists find places to put their money.

"The big question for those of us in the circle is, 'Was that just a one-off because of the earthquake, or are we going to see more engaged philanthropy in China among Chinese?' And our sense is that the general trend is changing. I don’t think we’re going to see anywhere near 2008 levels this year, but I do think that overall people’s minds and sort of experience have been opened up to giving in ways they haven’t been before."

Their minds may have opened, but more wallets are closed for now. Liu Youping is the Deputy Director of the government-affiliated China Charity and Donation Information Center. Liu says, "Donations to charity in the first quarter of this year are just a small fraction of what they were in the first quarter of last year – and that was before the earthquake." One reason is the financial crisis. Another could be skepticism about how the earthquake money was spent.

Beijing resident Shi Tie Ping says he hasn’t given anything more to charity since the earthquake. He says, "There have been too many stories of corruption," and he wishes there were more transparency about how donations have been used.

Still, Liu Youping of the China Charity and Donation Information Center says while donations are down this year, volunteerism is up. He says, "So many people volunteered both for earthquake relief and for the Olympics last year that it accelerated an already existing trend – for Chinese to give of their time, even when they don’t have spare cash." China’s State Council said today that 10 million Chinese volunteered in some capacity last year.

At a recent fair for non-government organizations, or NGOs, a 21-year-old political science major named Jiang San Lin said he’s planning to spend a year as a volunteer in a village school in Sichuan.

"I think that it is very important now to get a grasp of the Chinese village, and then I can do many things when I grow up and have my enterprise and then maybe I will support an NGO such as this and then to support the villages in China."

"Yes. I plan to be a businessman first, because I think maybe we can affect the countryside in China on an economic aspect."

Charles Li manned another booth at the NGO fair. He’s with the Narada foundation which funds education-related NGO’s, but it has a bigger purpose in mind.

"We have a mission that is to foster civil society in China. And it has to have a strong third sector to make a complete and mature society."

That third sector, Li says, is made of individual donors and volunteers.

"The third sector is very important for China, especially in the existing circumstances, when China has become more democratic and more open-minded."

Society may be more open-minded, but the government is still wary about allowing NGOs too much freedom or independence. After last year’s earthquake, there was an unprecedented openness for volunteers, and NGOs formed on the spot. But a few weeks later, those new NGOs were told to stop. If they wanted to keep working, they were told, they had to find a government department to sponsor and supervise them or they couldn’t collect donations.

So if the earthquake response moved China a seismic step closer to having an engaged and independent civil society, the government has since tried to nudge it back. The authorities may be succeeding for now. Whether they will in the long run is another question.