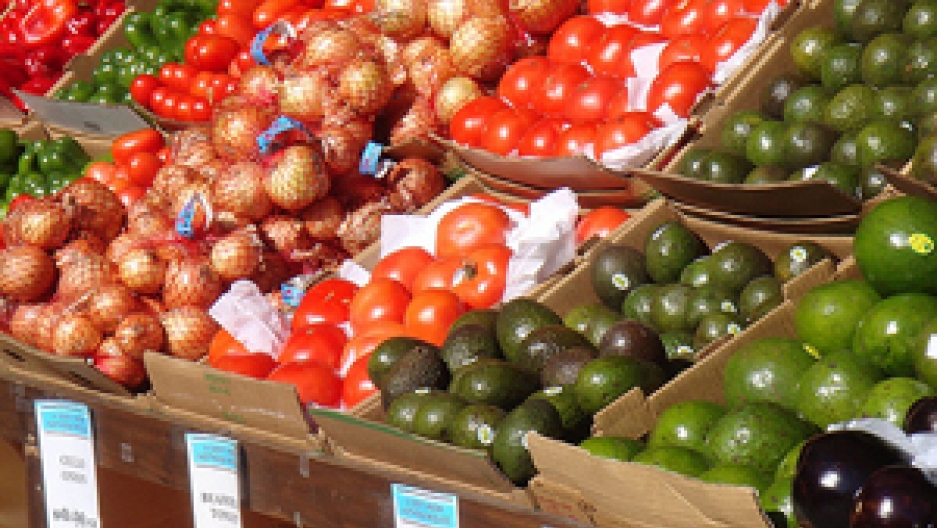 Many low-income neighborhoods in the United States lack access to fresh and affordable fruits and vegetables. Residents in these so-called "food deserts" rely on neighborhood corner stores and fast food chains as their main sources of food. But, as "Living on Earth's" Jessica Ilyse Smith reports from New York City, a number of programs are working to close the food gap by bringing healthy foods close to home.

When Michelle Obama rolled up her sleeves and started digging a garden on the White House lawn, advocates for healthy local food cheered. The First Lady set a powerful example by inviting Washington, DC schoolchildren to garden along with her.

The message: the inner city, too, can have access to fresh, organic food. And in these tough times this is especially important. Government figures show that some 36 million people live in households that have trouble just putting food on the table.

It's Saturday morning at the Cemalyn Grocery in Brooklyn. Cesar Rodriguez tends to his customers. Soda, cookies, chips and canned foods line the walls of Rodriguez's bodega. But, among the sea of processed foods and packaged goods, stands a small outpost of fresh fruits and green leafy vegetables.

Rodriguez through translator: "Through the program, we're trying to improve people's health and the health of the neighborhood, have people eat healthier products, and lose weight because obesity is a sickness here in our community."

Low-income neighborhoods like Rodriguez's have few supermarkets or other options for fresh fruits and vegetables. Yet there are many places to buy fast food, candy and alcohol.

Sabrina Baronberg of the City's Department of Health and Mental Hygiene wanted to find ways to address the many health problems like obesity, diabetes and heart disease found in poorer areas. She found that 80% of the food markets in these neighborhoods were small corner stores.

Baronberg: "These areas have many more bodegas than supermarkets and very few supermarkets in fact. That really inspired me to work to make these large environmental changes to make it easier for people to eat healthier."

So, in 2006 Baronberg began to work with bodega owners and kicked-off the Healthy Bodegas Initiative. She saw that residents wanted to change what they ate but needed help: "Nobody wants to live a life of chronic disease. So people would say to me I really want to make these changes, I want to switch to 1% milk, I want to eat more fruits and vegetables, I want to be healthier but I can't. My bodega only sells junk food and there aren't any supermarkets. So what am I supposed to do? And, you know, there is nothing more frustrating than that."

New York City's neighborhoods are not the only areas with limited access to healthy food. These so-called food deserts are found across the country in rural and urban locations.

Mark Winne has looked at food deserts for years: "It's relative based on how far somebody has to go to get to any kind of decent, affordable food store, and the means that they have to get there. And do they in fact have the means?"

Winne is the author of "Closing the Food Gap: Resetting the Table in the Land of Plenty." In the book, he chronicles the rise of food deserts in the 1960's, alongside the growth of the American suburb. With scores of people leaving downtown areas, inner cities were drained of wealth. Supermarket chains followed the wealthier client base and moved to the suburbs.

It wasn't just the lack of supermarkets that led to the growth of food deserts, but also the lack of public transportation to bring urban residents to suburban grocery stores. Winne says nearly 70% of the households in low-income neighborhoods do not own a car.

As an example he highlights the 8th ward of Washington D.C., which is close to the U.S. Capitol building. In this area, nearly 70,000 residents live with slim access to grocery stores.

Winne: "About 38% of those people are considered poor using U.S. poverty standards. If you look at the landscape we see almost no supermarkets and we also see another characteristic of a food desert, which is a tremendous number of fast food joints. And that's what people have to choose from for food. And as a result we see very high levels of obesity."

Costs from obesity and related chronic diseases are increasing. According to the Centers for Disease Control and Prevention, the U.S. spends over 117 billion dollars a year on healthcare related to obesity. And in low-income neighborhoods with lots of fast food and few healthy options, the obesity rate is rising.

Over in the Red Hook neighborhood of Brooklyn, Eugene rakes leaves that he'll add to one of the compost piles lining the side of an urban farm: "We have our compost beds over here that we've been processing for a long time. We have one that was built two months ago, and it's almost done but it's not all the way done. It's almost broken itself down, all of the nutrients and stuff like almost broken down and created our soil that we use."

Eugene is one of about ten neighborhood teens who work at the Red Hook Community Farm. The farm - run by the non-profit group Added Value - was built literally from the ground up. Soil was brought in to cover an old abandoned ball field. If you look closely on the outskirts of the rows of onions, lettuce and beets you can still see home plate and the faint white lines that mark the field's boundaries.

This farm has not only increased the community's access to fresh and affordable fruits and vegetables, but also has helped change the neighborhood.

Eugene: "Before the farm I'd say it was pretty much a little badder, because there was still a lot of gang violence and stuff like that going around here. I'm just basically proud of being here and helping out and being able to bring healthy food to my neighborhood that I live in."

Eugene and other teens plant seeds, harvest crops and sell their bounty at a farmer's market in the neighborhood. Before the farm started, residents went through a lot to get fresh food.

Kate and many other Red Hook residents who buy their produce from the farm understand that fresh fruit and vegetables are important for their health: "I took two buses or a car service to get food back to Red Hook. I mean you couldn't even get a quart of milk, or vegetables."

William Lewis is a longtime resident who didn't like what he found in the neighborhood before the farm: "Well, it was dull, there was nothing you could buy. Not fresh anyway – just regular stores, you know. When the farm came, I just started coming here because I know it's fresh food, and I like fresh, it's better for me—it's better for everyone as a matter of fact, you know?"

The farmer's market has become a neighborhood gathering place, and teens at the farm not only earn money and learn how to grow food, they also learn how to be stewards of their community...a community that is focusing on changing the circumstances of its health.

Efforts like this inspire author Mark Winne: "So it's the human innovation, creativity, willingness as a community in some sort of organized social way, and political way of trying to change the circumstances that they live in—and that really inspires me."

Programs like the Added Value farm and the Healthy Bodegas Initiative operate from the ground up to improve the health of people living in food deserts. They also help to close what Winne calls the food gap that severely divides Americans.