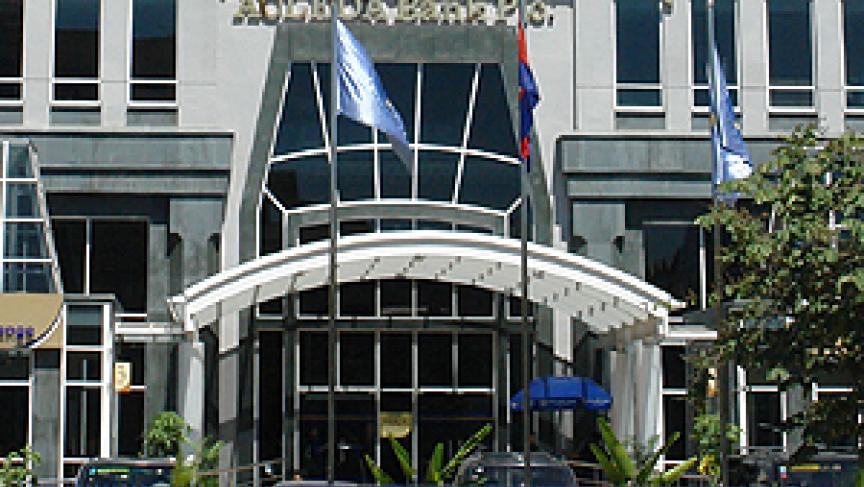 Look at the balance sheets of many banks in Southeast Asia, and you’re going to find that the ink is the same color it is in many US banks: red. Asian banks that lent to property speculators are in particular trouble. But one bank in Cambodia has lent most of its money to a different type of borrower. The ACLEDA Bank has become rich by lending to the poor. Its so-called micro-loans average just $500. David Hecht is in Phnom Penh reporting for PRI's "The World" -- he gives an update on Cambodia's largest bank.

The background music, the polished stone lobby of ACLEDA Bank’s corporate headquarters and its six-story high atrium belie the humble beginnings of what was once a non-profit NGO.

The building is just two years old, says the bank’s CEO In Channy, and already it's too small: "In fact, because of the growth, ACLEDA Bank is now looking for another new office to accommodate 300 to 400 extra employees."

On average, the bank has doubled in size every year since it transformed from an NGO in 2003, with current growth slowed to around 30 percent – still remarkable considering the sorry state of southeast Asia’s economies. Acleda now has customers from all income brackets, but the poor continue to make up the lion’s share.

Channy: "All customers are important – micro, small, medium, and large. We don’t discriminate customer who used to obtain loan when we were NGO. When we got license as a bank they became a customer of the bank. We grow together."

In Channy has also grown. As a boy, he was a cow herder under the Khmer Rouge. He later fled to a refugee camp, studied business management and when peace came, he eaded NGO to assist displaced people. He realized that what they needed to take up their professions again as farmers, craftsmen, and petty traders was a little cash. The emblem of his micro-finance NGO was the mythical “hong” bird, which according to legend, saved people from drowning. Now, it is the emblem emblazoned in gold on ACLEDA Bank. But ACLEDA saves people at a price – its interest rates are exorbitant by Western standards.

Deung Tarni and her daughter own a little general store along the river in Phnom Penh. To increase their stock, they took a loan with an interest rate of 3 percent a month – that's 36 percent a year. And rates of some micro-loans run as high as 60, 70, even 100 percent a year: "Sometimes it's hard to pay the bank each month and still make a living – but we always do it. It's very important to keep one’'s promise."

There are people who are disgusted by a bank that profits off the poor. One woman, who did not want to give her name, said: "It’s not a good idea. It’s not fair!"

Her middle-class family owns farmland that peasants rent out with money borrowed from ACLEDA. She explains that when the price of crops is low or the harvest is poor, the farmers have huge problems to repay. Cambodia’s leader Hun Sen once accused ACLEDA of taking advantage of the poor and threatened to close it down. But administrative costs for micro loans are inherently high and the loans are risky as many poor borrowers have no collateral. The World Bank's private finance arm, The International Finance Corporation, which has a 12 percent share in ACLEDA, sees high interest rates for the poor as unavoidable.

A World Bank representative in Cambodia, Tim Conway, says subsidizing the loans, simply doesn't work: "The trouble is that when it becomes subsidized, it becomes seen either as a gift and repayment rates go much, much lower than they are with commercial operations. The other point is that it becomes a target for political patronage. It gets directed to people with influence, not necessarily the people who will make the best use of the money."

And ACLEDA tends to lend money to people who provide basic provisions rather than to people who speculate in areas like real estate, which is why Conway thinks it may weather the global economic crisis better than other banks: "I think v is probably better positioned than some of the commercial non-microfinance commercial organizations that have been lending a portion of their money to speculative, often property sector uses. I think at the moment we feel that Acleda will be stronger than the average."

One customer that has grown with ACLEDA is Hey Sepana and her husband, Sren Scrouen. They were retail sellers of propane gas for cooking but now sell wholesale. They’re on their fourth loan, but the first that’s not micro-finance. It’s a small business loan for $4,000 that has an annual interest rate of just 24 percent. As a fully-fledged bank, ACLEDA also offers them 24-hour customer service and a Visa debit card. And much of the money ACLEDA uses to lend out now comes from deposits by people who had borrowed from the bank and need a place to park their profits.