'No Particular Place to Go' as Chuck Berry sang in 1964 is as good a metaphor as any to describe the current plight of the U.S. auto industry. It was just announced that the once mighty Pontiac is no more, and at least two of the Big Three are in serious danger of being relegated to museum status. Ironically, a museum is where I recently saw an exhibit celebrating General Motors' 100th (and perhaps final?) anniversary.

The Petersen Automotive Museum in Los Angeles is a rather impressive display of beautiful automobiles and the culture that grew up around them. It's also a good place to learn about L.A.'s reputation for car customization and innovation. 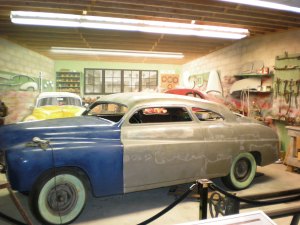 A recent visit to the Petersen inspired many of the ideas in our current, very timely episode on the future of the American automobile. The takeaway? If anyone can save Detroit, it might just be Los Angeles. Host Kurt Andersen takes a tour of L.A.'s singular car culture from hot rodders to low riders, old-school customizers to next-generation designers. And we get a glimpse of the future behind the wheel of the all-electric, super aerodynamic Aptera, one of several scrappy, independent car companies sprouting up all over southern California. Kurt concludes, "instead of the Big 3 we may have a return to the Little 10."