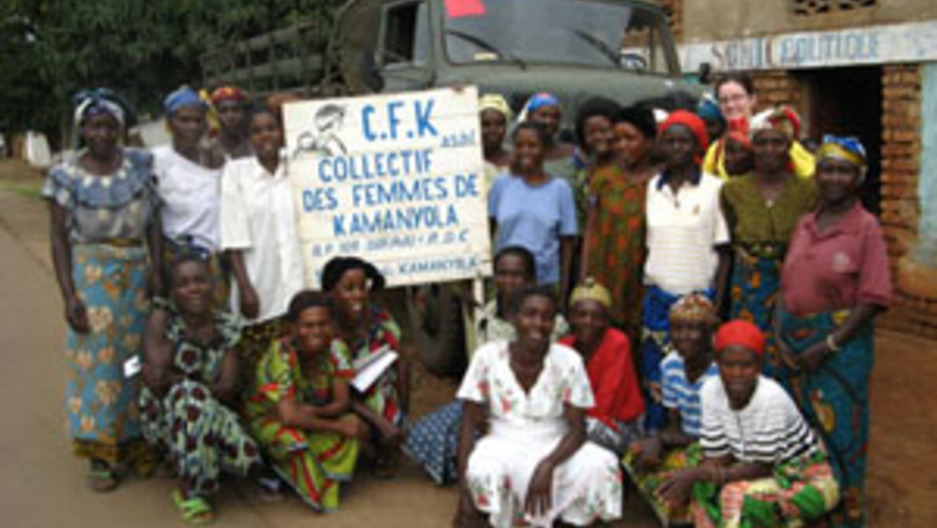 The women of Kamanyola, a town near the Rwandan border. (Image: theworld.org)

In August 2007, "The World's" Jeb Sharp traveled to eastern Chad to report from the camps housing refugees from the conflict in Darfur, Sudan. While she was there she met a group of rape survivors. They had all been captured and enslaved by armed groups for various lengths of time. Their testimonies, and their trauma, stuck with Sharp, and she produced a five-part series on the widespread use of rape as a weapon in conflict areas. The series received a 2009 Dart Award for Excellence in Coverage of Trauma.

To follow is Part II of Sharp's series, which looks at how aid groups and grassroots activists responded to the crisis in Congo.

In the Democratic Republic of Congo, rape is a weapon of war. UN officials say the brutality and scale of the sexual violence there is unprecedented. Tens of thousands of women -- and girls -- have been attacked in the African nation in the past decade. Some estimate the numbers run much higher. In the midst of this overwhelming crisis, aid groups and grassroots organizations are trying to help women there recover and rebuild their lives.

Sarah Mosely works for the International Rescue Committee in eastern Congo. She specializes in gender based violence: "The rape that we're seeing here is...is brutal. Most of the women are gangraped. Often they are mutilated in the process to the extent they they will not be able to have children again or become incontinent so the physical wounds incurred by these rapes are severe and life threatening often."

That's why the IRC and other aid groups focus first and foremost on medical care. But the rape here also causes psychological wounds. And societal wounds, according to Mosely: "Culturally women's value is very closely tied to concepts of purity and chastity and they already have a fairly low standing in society so when a woman or a girl is raped if she's married often a husband will reject her because she's seen as unclean or if she's a young girl who's to be engaged or still a preteen she won't have the opportunity to be engaged because men in the community will again reject her."

Those are wounds that surgery and medicine won't heal. So Sarah Mosely also focuses on counselling and family mediation and small-scale economic development--strategies that help women recover what she calls "some sense of normal." One effective way to do that is through grassroots women's organizations.

As in other communities across eastern Congo, women here were being raped by soldiers and militiamen. So in 2001 some of the women in Kamanyola formed a collective.

Josephine Mugoto is the groups's treasurer: "We started the Kamanyola Women's Collective because of the situation women were facing here during the war, she says. We had a big problem. No one would listen to the women. Sometimes when they had problems with their husbands, when they were chased away from their homes no one heard them. We joined together to defend the rights of women here."

The women worked in secret at first, helping rape survivors to find medical care and trying to help families stay together. But gradually they grew bolder.

Mugoto: "We had lots of young women who were abandoned by their families she says. So we set up a sewing group to keep them busy. Those who weren't able to sew we taught to knit."

Getting women together to knit and sew may not seem like much. But it's remarkably effective. It helps them become productive again after their lives have been shattered. The IRC's Sarah Mosely says that's especially important here in Congo: "Not only are women valued on the concept of chastity and purity but also on their productivity and women often voice feeling useless or not needed or without any purpose after sexual assault. There's a real sense of despair."

The group started literacy classes. It also bought farm land for its members to cultivate. They sell the crops and manage the profits. The money helps pay their kids school fees. It's a testament to the power of this group that it can claim 450 beneficiaries including Charlotte Siyapata.

Siyapata: "I am one of the people who was taken and raped and I came back and my husband refused me in the beginning but with the intervention of these women I was able to stay with my husband. Now I'm very happy. At the beginning whenever I saw people talking I thought they were talking about me. When I saw someone pass by I thought maybe they wanted to rape me. So I was full of fear and suspicion. But these women have helped restore my morale."

There are other encouraging stories. But it's not all rosy. In Kamanyola the war has faded and the fighting is far enough away that the women are no longer in danger from roving armed groups.

But the collective's president Fatima Kayingeli says the ways of the war have seeped into the culture itself: "Boys who were teenagers before the war and are young adults now grew up seeing people not punished for rape, she says. So they go and get a girl and rape her and know they won't be punished. It's not just men in uniform anymore. It's civilians too."

People here often say the sexual violence won't end until the fighting finally does. But if what Kayingeli says is true it won't end even then. The trauma runs too deep. But here at least in Kamanyola, the women have a sense they're making some progress. Against all the odds.

Listen, get transcripts and more for the series "Rape as a Weapon of War" from "The World."