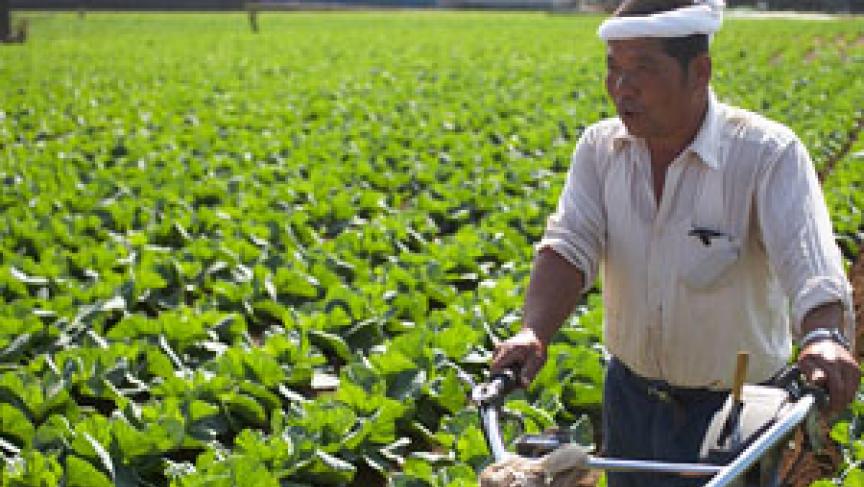 The economic downturn is prompting some Japanese professionals to take a look at another field -- farming. They've been taking a crash course run by some farmers hoping to bring new blood to Japan's ailing farming industry. Correspondent Akiko Fujita reports for PRI's "The World."

Lush farmlands dot the Yamanashi Prefecture three hours west of Tokyo. The region most famous for Mt. Fuji is known for its peaches and grapes. So it's not unusual to find workers pounding the soil on a Saturday afternoon. That is, until you find out who those workers are: Shun Tanikado is a student at one of the country's top law schools. Another, Ayumi Arakawa, just graduated from Tokyo University. Self proclaimed "salaryman" Takayuki Fujii is an accountant at an ad agency.

And like nineteen others on this farm Fujii's attempting farming for the first time. His boss in Tokyo wasn't happy to hear the 28 year old was taking a weekend off at the end of the fiscal year, the busiest season for accountants. Fujii is taking part in a two day crash course on agriculture.

Farmer Hisashi Sonehara started the program six years ago to raise awareness about farming. Sonehara says there weren't enough farmers to cultivate abandoned fields. He needed help from people in the city.

What started out as a small patch of cultivated land grew into more than eight acres of vegetable fields. Last fall interest from young urban workers skyrocketed with the economic crises. Sonehara began fielding calls from bankers, IT professionals, businessmen ready to trade their careers for a life in farming.

Farmer Masachika Ogiwara likes what he hears. He's been trying to attract younger farmers for years. Twenty- to forty-year-olds made up less than a quarter of the new farming population in 2007.

In June Ogiwara will launch an agriculture magazine targeting 20- to 30-year-olds, featuring farmers the same age. He says he wants to show people that farming is cool, it's a lucrative business.

The renewed interest comes at a critical time for Japan's agriculture industry. More than half of the country's farmers will retire in the next decade. That concern, and concerns over unemployment prompted the government to start an agriculture training program last month.

Back at Sonehara's farm, students dig out weeds while discussing their future. New graduate Ayumi Arakawa says Japanese farmers have the best skills in the world, and farm life is a nice escape from the hustle and bustle of the city. She dreams of starting a farm back in her hometown but she's not ready to leave her life in Tokyo yet. It's a dilemma Sonehara hears all the time. He says it takes about three years to master farming skills and not everyone has that kind of patience. But Sonehara says he's experienced the rewards of hard work. He traded in his finance career for farming after the country's last economic crisis more than a decade ago. He hasn't looked back since.