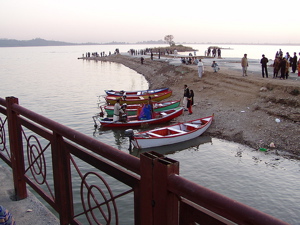 U.S. officials worry about militants based in Pakistan and the potential collapse of a weak government. Now added to the worry is Pakistan’s shortage of water. What little water is available is making people sick. The World’s Laura Lynch reports from Pakistan.

Dr. Satash-e Zawaf treats patients at a clinic outside Rawalpindi, near the Pakistani capital of Islamabad. She says one in every five babies is sick with water-related illnesses. According to the Pakistani government’s own figures, every year 3 million Pakistanis get sick with water-borne diseases such as diarrhea, hepatitis and typhoid. More than a million of them die, including 250,000 children under 5.

A visit to just about any waterway in or around the city illustrates the problem. Rivers, streams and canals near Rawalpindi are contaminated with raw sewage, garbage, industrial waste and runoff from farming operations.

Abdul Majeed is a civil engineer who has worked on water issues for more than three decades and knows all about the human toll, the huge numbers of people getting sick and dying from the water they drink. “These are the direct results of that contamination. No doubt, water pollution is the major issue right now. Unfortunately, despite the fact that we have rules, we have regulations, we have laws, but unfortunately the implementation of the laws is a major problem in Pakistan.”

The Pakistani government wouldn’t necessarily disagree. By its own admission, more than half the country’s population of more than 175 million people doesn’t have access to clean drinking water. And a 2007 report from the Asian Development Bank said only one percent of urban wastewater is treated, so raw sewage goes right back into local waterways and the drinking water supply suffers – when there is water to drink.

Abdul Majeed says even if water stations have water, often the filters aren’t replaced or the storage tanks aren’t cleaned. “We do create infrastructure, very good infrastructure for the benefit of people, but then we tend to forget maintenance.”

Even Rawalpindi’s picturesque artificial lake is polluted. Most of its water flows to a nearby filtration plant and then on to serve parts of Rawalpindi and Islamabad. But some of it also seeps into the surrounding aquifer, which provides water for a local neighborhood.

Several hundred yards from the lake, an enclosed well draw up water for the residents. The well’s caretaker, Mohammed Siddique, says the water is excellent. Groundwater doesn’t usually doesn’t carry the same kind of pathogens that can contaminate surface water. But in this case, it seems that even the groundwater is dirty.

Mehreen Rashid lives in the colony and gets her water from the well. Rashid, who’s in her 70’s, complains about the number of people who are getting sick here. “Before, we never had so many people getting sick. We don’t know why, why illness is so rampant now. There was no such thing in the old times.” Abdul Majeed, the civil engineer, says he knows why. The groundwater has been contaminated with pollutants from the reservoir.

And the problem here and throughout Pakistan is likely worse than even the dire official statistics suggest. In much of the world, many of the people made sick by contaminated water never see a doctor – and industrial pollutants tend to cause long-term and chronic illnesses that generally are never traced to their source.

The government declined repeated requests for an interview, but it says it is in the midst of ambitious water quality programs. There are plans to build more water filtration and treatment plants across the country, in addition to hundreds that have already been put in place.

But the challenge is staggering, and in this already fractured and unstable country, there are growing concerns of a backlash. Along with all the other conflict roiling Pakistan, there are also growing protests over water – and Majeed believes it could get worse. For so many people here, water – their lifeline – is making them sick and even killing them.